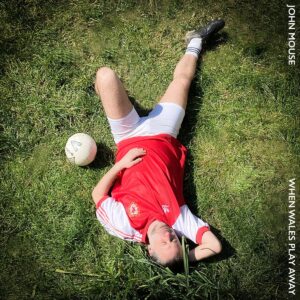 (Keep Me In Your Heart Records)

There are some footballing shenanigans afoot. The delayed EURO 2020 tournament is upon us. Wales have qualified.

Despite cruelly not being selected for his nation’s final 26, John MOuse has weighed in with a rousing football anthem in tribute to those considerably younger and with a proven footballing record that made the cut ahead of him. When Wales Play Away is released digitally today and is accompanied by the video which we are pleased to premiere here on Louder Than War.

Remember how confidently we all approached the Eurovision Song Contest the other week, expecting absolutely nothing from it? If you imagine the polar opposite of that bleak certainty, then you have the youthful blind faith of the average football devotee.

Football songs tend to be gung-ho variations on “We’re by far the greatest team the world has ever seen.” England’s Three Lions was unusual in its focus back in 1996 for acknowledging decades of near misses and agonies. Wales had their own ‘We’ve not qualified for anything since 1958′ ‘down on our luck’ anthem in 2016, recorded by the Manics.

But that tournament went remarkably well for Wales. They finished 3rd. Hence the central assertion now in MOuse’s chorus is that, “When Wales play away, it’s like playing at home.” Tentative hope has been replaced by a confident sense that they’ve earned a seat at the big table.

When Wales Play Away has all the required aspects of a solid football song. The chorus is spot-on singalong material. It can be belted out, by semi-inebriated people, in their own key, at slightly different speeds, on a loop, until the end of time. Should those supporters deign to stop singing the chorus, they can instead unite in chanting, “WALES! GOLF! MADRID!” at a hearty bellow (The text of Bale’s famous banner designed to wind up his employers Real Madrid, which concluded with the phrase, “in that order”).

It’s also a tune that’s very easy to dance to (that dance where you bounce on the spot and move your arms like pistons). There’s a decidedly 1970’s glam-rock stomp. Change the lyrics and it could be a tune from a Wombles album.

There’s a trademark John MOuse spoken-word section that’s gruffly fervent, glowing with pride for the ‘Red Wall’ of Welsh support, which this year, will mostly be behind their TV screens: “We’ll build our red walls on the back of our chairs and settees and patios and decking and gazebos / But we’ll be at home, away from home, at our homes.”

The video sees John surrounded by Welsh football iconography: John Charles, Mark Hughes and Ian Rush on the walls of the MOuse house. A starting eleven in its tactical formation is scrawled on his living room wall with himself at right wing-back. The park scene feels somewhat like the Brian Glover football lesson from Kes and certainly depicts JM living his best life (plus staking a claim to late inclusion due to injury of a squad member).

Two years ago, John MOuse sang There’s a Hole in my Heart (An Area the Size of Wales). This summer, his heart is full and complete. Wales’ star player, Gareth Bale, forms the central focus and “The heart of Bale is an area the size of Wales.”

Thank goodness that their national round-ball talisman has such a conveniently rhyme-worthy name. Life would have been much tougher had the main man been Chris Gunter or Ben Cabango.

All words by Jon Kean. More writing by Jon on Louder Than War can be found at his author’s archive. He tweets as @keanotherapy.