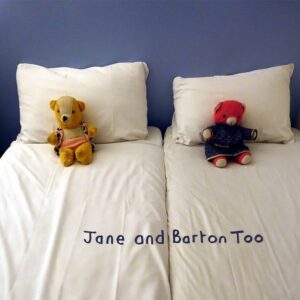 Jane And Barton: Too

A brand new album from Jane Lancaster and Edward Barton, and the belated follow-up to their 1983 self-titled debut mini-LP, which was also released by Cherry Red Records. The duo are probably best known for the acapella It’s A Fine Day, which was treated to a danced-up hit cover version by Opus III in 1992. Too comprises of eleven new offerings composed by Edward and sung by Jane. Ian Canty ponders the prospects for a sunny 24 hours…

Nearly forty years separate the first and second Jane And Barton albums, but it feels exactly right that they pop their heads above the parapet at just this time. The seven-track debut came out back in 1983 and even in the dying days of post-punk it was an oddity, but certainly one to savour. It’s A Fine Day and I Want To Be With You were extracted as singles in the same year, but apart from the Lovely And Chicken 12-inch at the end of the 80s, nothing much else was heard from them as a duo.

Of course, they have busied themselves in other ways since then, with Jane later acting on television and Edward writing hits for Lost Witness among others, plus developing his dual career as a musician and poet. Over time, their most well-known number, It’s A Fine Day, also took on a life all of its own. Dance act, Opus III had a big hit with their cover in the 1990s and Edward nipped in with a credit from no less than Kylie Minogue with her single Confide In Me, which borrowed from It’s A Fine Day.

Which brings us to Too, an all-new album from the pairing. Given the huge gap between Jane And Barton’s activities, one may ask what has changed in their approach. The answer is, ‘not much’ and that is something we should be very grateful for. Jane still fronts Edward’s extraordinary capacity for imagery with the same sense of innocence and wonder, fused with hints of deadpan comedy.

The sound they end up producing is one that is difficult to describe. It is kind of like a mix between the mighty Young Marble Giants and The Marine Girls, with Syd Barrett supplying the songs, with a splash of St Etienne’s downbeat electro-disco thrown in for good measure.

Too is set in motion by the touching Late At Night, a sparse sound with a ringing organ that is perfectly voiced. A sample of Edward’s abundant skill with phraseology displayed on this tune is, “I take my loneliness for a walk.” For me, that encompasses a familiar feeling so well and accessibly. Added to that, he’s not afraid to use the word ‘wazzing’ when referring to rainfall either.

Stella takes things on a little more playfully, with percussion joining the keys and giving it a bouncing momentum. Edward’s voice joins Jane’s on backing vocals on a family story attuned to the more cynical, changing times we currently inhabit, tersely summed up in the line, “But now honesty doesn’t work.”

Propelled by an electro pulse, Hey! It’s The Twenty Twenties again concerns itself with the present, but also people’s preoccupation with the past. “Just enough is plenty” looms out of the song lyrics, something a lot of folk could do with considering in 2021. Next comes Shushy Time, to all intents and purposes a delicate and charming modern lullaby. Some might start at such wilful wistfulness, but I felt a lump in my throat and a tear in my eye. It’s truly beautiful.

A pretty, music-box sound heralds Give Your Mum A Kiss. The sadness of time passing and life are vividly brought into focus here in a simple but thoroughly genuine way. Daisys (their spelling) And Buttercups again touches on lullabies, in an acapella number that softly tells someone who is disturbing the rest of the song’s principal character to gently shove off!

Gradual forgiveness is granted: “Make me toast, I’ll let you live.” The words are so skilfully put together on Too and Jane always strikes just the correct note. Plus it is difficult for me not to love a song that poses the question, “Can you fit chips in an intravenous drip?”

Sexy Guy Sex Girl has a touch of late-night electro-dance and soul/jazz, with Jane’s voice wavering coolly and the simple organ riff providing the link between acid house and John Shuttleworth. The following Once Around The Lake clicks rhythmically, with the vocal almost a whisper. A walk in the park is the subject, but the ducks in the pond come off second best, “Cuz bread is bad for ducks.” They do, however, get some sustenance from cut-up lettuce and the remains of Jane’s flapjack…

Clicking along with a faint bossa nova, Walking Back From Town is a tale from Edward’s world of reflection and pinpoint observation, brought to life by another of Jane’s sensitive readings. Then He’s Not Arsed has a melody built for the more electronica end of the dancefloor – a story of a floundering relationship, with Edward again vocally in the background. The lively application of electronic percussion, a core strength on much of Too, is key here.

Finally, we reach Moon, a voice-only item, which has haunting echoes of It’s A Fine Day. The final words on this LP are, “I’ve got the words all wrong,” but nothing could be further from the truth. This is a really beautiful end to an alluring record, a really deep pleasure on many levels. It has all the hope, insight and sheer poetry one could wish for, added to a winning way with low-key, but killer tunes.

Going by their track record, we’re not going to get the chance of too many more Jane And Barton collections, which definitely makes Too one to treasure. It is almost too on the nose to say this album is full of great songs, delicately applied instrumentation and the kind of unique but naturalistic wordplay that probably wouldn’t even occur to anyone other than Edward Barton. But that is what it is. We won’t get too (sorry) much better in 2021. Let us embrace it.

All words by Ian Canty – see his author profile here.

The post Jane And Barton: Too – album review appeared first on Louder Than War.