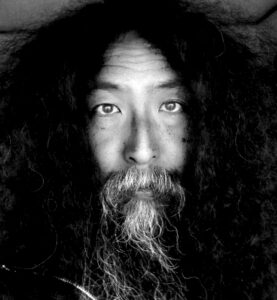 The creativity of Kawabata Makoto can be visualised in the form of a certain musical roller-coaster. Despite projects and collaborations Makoto had over the years, the after-effects are always enriching you in the form of such euphoria. The recently released Dual Myths LP by Mainliner is not an exception.

I got the chance to speak with Kawabata Makoto about the reformation of Mainliner and his understanding of what rock-music is, about concepts and words, Acid Mothers Temple and collecting vinyl.

By the time, you released Revelation Space, you hadn’t been playing as Mainliner for twelve years. Getting together again, you replaced Asahito Nanjo with Taigen Kawabe. How did you manage to keep it like nothing has changed and connected to your roots, per se?

Just a few months before the previous Mainliner’s final U.S. tour – I don’t remember clearly, probably 1999.., I left the band with the drummer Yoshida Tatsuya. Kohata Tosuke replaced me as the guitarist, Shimura Koji replaced Yoshida as the drummer, Nanjo booked the US tour with this new line-up. But Kohata left the band quickly, Nanjo called me to join again, I agreed to join just for this US tour.

That U.S. tour was one of the worst experiences in my musical career. There were so many problems, especially between Nanjo local promoters and organisers. Anyway, I left the band again just after this US tour. But Nanjo called me again to join the recording of the new album. We had already played some new songs for this album on the US tour. I agreed and recorded the previous Mainliner’s last album, Imaginative Plain, that was released on CD from PSF Records in 2001. Nanjo called again(!), he asked me to play just one concert in Tokyo for the “new album release party”, it was my last concert with the previous Mainliner, also probably the last concert of the previous Mainliner too. Since that night, I haven’t ever seen and talked to Nanjo.

Since 1998, I have toured with Acid Mothers Temple in U.S, U.K, Europe and the whole world every year. On the tour, I heard many people want and need the heavy psychedelic music like Mainliner. At that time, Mainliner was totally “past” for me. But there was a chance to listen to Mailiner’s first album Mellow Out at someone’s house. Probably, I haven’t listened to it for a long time…I almost forgot what I composed and played. I felt my youth and passion…Also ambition from my early sounds!  Then I had an idea to play this kind of heavy music again.

Maybe you know, only the first album, Mellow Out, was composed by me. Nanjo composed all songs from the second album. Then I had another idea, should I reunite Mainliner? but Nanjo has disappeared for a long time, so I asked Taigen to replace Nanjo, and Shimura Koji, who is the last drummer of the previous Mainliner, to join. At that time, he was the drummer of Acid Mothers Temple. 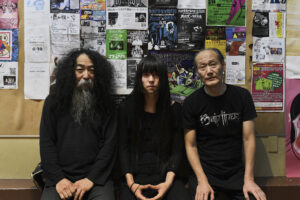 What usually defines the identity of the projects you’re involved in – a certain musical concept or individuals you work with or both these?

Case by case. In some cases, the line-up means mainly the identity of the projects. It means I should form the new projects. In other cases, first I have some vision or idea of the projects. Not necessary to form the new projects – I can find the way to play on some projects. There is an example, the 1st track of the new album Dual Myths was originally played by my other project Adios Dios that is the heavy rock trio. But when Mainliner started to record the new album, Dual Myths, a few years ago, suddenly, I got an idea to play this song by Mainliner. And it was [a good] fit! I believe, music is already completed when music is born in this world – in this dimension. But almost all people don’t know how to listen to this “pure” music from the air without any audio systems.

I’ve always said I would love to be a good radio tuner for people. I catch music as the radio receiver, then play this music for people can listen. When I catch music, of course, I try to catch “perfectly”. But even if I could catch it perfectly, I can’t play if I don’t know the correct place to play it. Fortunately, Mainliner was the correct place for this song. Music teaches me almost [all] things I need. I need just to open my ears!

This improvisational component has always been very important to you. How do you connect to your inner-cosmos transferring your feelings on the language of music?

When you’re in the process of the music creation, what helps you to tune in with your collaborators to find the common language with them while improvising?

Some of your solo-records – like Private Tapes feature various compositions recorded by Acid Mothers Temple or by you collaborating with different musicians – titled “improvisations”. Even though, the element of improvisation is always there, what dictates would it be fully improvised or partially?

First of all, the titles are totally pointless for me. I named titles just [act] as [an] icon of my music. Even the title is “improvisation” or any literary titles, it doesn’t matter to me. I’m quite poor at naming titles – especially in English. I don’t have any messages in my music. Music is just music for me, not words. Anyway, titles are totally pointless, sorry. But if people can enjoy and image something from my title names, it’s also good happening for me.

What was the process of work on Dual Myths like?

Quite often, the music you’re creating represents an opposition of different things. Is it important for you to create a certain kind of contrast with these elements interacting with each other?

No idea. Cause, music from my cosmos teaches me everything that I should play. I just try to be a good radio receiver and reproduce faithfully to people.

You started playing music in the late ’70s. Over the years of your career, you observed the rise and development of different musical tendencies – punk-rock, new-wave, techno. How much did the aesthetic of these musical tendencies affect you on a creative level?

Especially until mid-’80s, I tried to find [lots of] “new” music at that time. In particular, it was really time for me that “new wave (at that time it was called also ‘alternative music’ recently ‘post-punk’ or something else?)” was born, prospered and became obsolete in only a few years. Of course, I have found much music that I have never listened to before and got influences with my process of growth, especially in my teens and twenties.

But I gave up checking any new music in the late 80s-early 90s because there was no more interesting “new” music then, I changed to find great music that I don’t know yet in music history. I totally stopped living in any trend, phase and topics in the world. I haven’t read any magazines, and no TV for the last 30 years, no mobile phone still now. No latest technology (laughs)… People say I still live in “Showa Era” (especially 60s-end of the 80s)…Indeed.

I still use an old tube television set, VHS and Beta video players, no credit card, no mobile phone in my life, manual transmission car – in Japan, the automatic has more than 90% share!…Looks like totally anachronism.

I’m not interested in any “new” things. Also, I don’t need such new things in my life.

Music is also the same. “New” is what? “New” means totally pointless for me. I’m interested in only “good”, “good” is a totally different significance from “new” and “old”. Also “on a creative level”… I haven’t created…Music from the cosmos teaches me everything that I need and I should play. 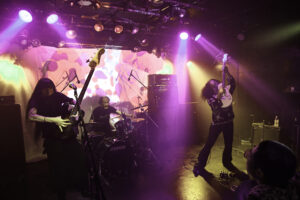 But growing up with rock ‘n’ roll music, what led to you experiencing and expanding the borders of some of these tendencies? And isn’t it difficult to do something unusual limited with this rock-format?

What means “rock” that you said? This is just for me, “Rock” is the word for “good music”. For example, Karlheinz Stockhausen’s music is “Rock” for me, also Igor Stravinsky too… Even people called these are “classic” “20th century contemporary music”…Metallica, Guns ‘n’ Roses” are not “Rock” for me. Even these are called “rock” by people and the media…These are probably [very] popular music, great entertainments, but not “Rock” for me.

Since then, most of the releases by Acid Mothers’ Temple came on your own label. How important is this for you, to keep it DIY and what did you feel about getting to work with labels like Riot Season?

We don’t have any business ambition. Recently we have released my private projects and Acid Mothers Temple’s albums for selling on the tours. It’s enough, and not distributed…But after COVID-19 all tours were cancelled. We totally lost any chance to sell, so there are too many stocks in my room! Probably I have to ask any distributers? But I don’t want…

Following your own words, while playing live, you never do soundchecks. But what helps you to mentally tune in for playing a show, right away?

You misunderstand my words. Acid Mothers Temple have never rehearsed, we have met only for concerts and tours. Even recordings, we haven’t played all together…About “soundchecks”… I don’t like soundchecks. Especially on the tour, if there are any other bands, we have to pack all pedals and instruments from the stage, and we have to set up for our set again. On the North American tour, we had a “soundcheck” only at the first show of the tour. From the second day, we arrive at the venue just before doors opened. And just before our set, we have a super quick “soundcheck” on the stage, then start playing! There is the most important thing: we need to trust the sound engineer. Also, the sound engineer must respect the music that the musicians want to play. Musicians and sound engineers must understand and respect each other. And a great sound engineer can always work sooooo quickly.

Also, a bad sound engineer always takes suuuuuch a long time. We have so many experiences to take 5 minutes just for making a “snare” sound! Oh, man…Do they have ears?

This point is really easy to understand the sound engineer is good or not.

You’re a passionate vinyl-collector. When you get to a record-shop, what do you usually look for at first? Any particular artists, labels, records you search for?

All the shots courtesy of Riot Season Records.