Interview: Chumbawamba’s Boff Whalley takes to the hills for a new theatre show. 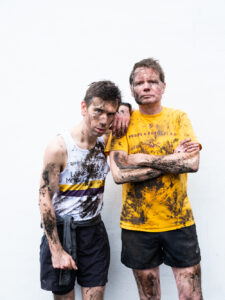 Boff Whalley is best known for being the guitarist in anarchist collective Chumbawamba who scored one of the most unlikely hit records ever when Tubthumping shot up to Number 2 in the charts – only held off top spot by Will Smith’s Men In Black.

In more recent years he has turned his songwriting skills to conducing The Commoners Choir, who sing modern songs of rebellion and hope, as well as working on community projects across the UK.

But Boff is also a die-hard fell runner of many years standing, so he has teamed up dramatist Daniel Bye to create a new show called These Hills Are Ours, examining our relationships with the countryside around us, and the joys of getting a sweat on while you’re exploring it.

Paul Clarke spoke to Boff to find out more about this new show that will go on the road when Covid-19 restrictions are lifted and asks how strange was it to become a most unlikely pop star?

So, Boff, what’s this new show with Daniel Bye all about?

“It’s kind of two blokes having a conversation with music and songs about how much we love to run on the hills in the countryside.  But then all the things that spin off, which is what we think about land ownership, property rights, the history of land ownership, digital technology, escaping from work, escaping from the onslaught of communications, wildness, freedom. It’s basically trying to roll all those huge philosophical questions into this show about the love of running.”

The narrative thread of These Hills Are Ours is an epic run Daniel undertook, which you joined him on driving the support van, but you’re both to keen stress this is not just a show for runners.

“We would always end up talking about running as that’s what runners do and it can get really boring.  We decided that it would be good to have these conversations in public which weren’t about what boring runners talk about like their times, how fast you did this, what the weather was like, what kind of shoes do you wear and all the really boring stuff that kind of excludes everybody else. We thought let’s talk about the thing we love to talk about it but use it to talk about the huge things that are going on in the world.”

So walkers, and anyone who has ever set foot in the countryside, will also get something out of it?

“It’s funny because I’ve been running for such a long time, especially on the fells, and I became aware that there was a kind of mistrust between walkers and runners. It always baffled me because when I go for a walk I really enjoy it, and have a good time. I never think I wish I could just run this bit and when I’m running I don’t think I wish I could walk this bit. They are all part of being out, and I think whichever way people use the outdoors, especially with what’s going on in the world, people need to grab time to get away from this kind of madness. It’s really important however you do it.”

I hear you’re also offering a unique extra to audience members and local runners on the morning after each show?

“One of the things that we started doing was running from the centre of towns to the nearest hill or the nearest bit of proper countryside. Not on the roads, but going on paths, canal towpaths, wherever, and we thought we could do this everywhere. Wherever we go we want to say tomorrow morning we are going to set off at 8 o’clock from this theatre, and if anybody wants to join us they can. We will make sure there is transport back, you’re all welcome to come, and the point of that as well is to learn from local people about their place.”

Your background is in music, and Dan’s is primarily in drama, so is this an Elton John and Bernie Taupin arrangement where one writes the tunes and the other the words?

“To be honest I quite fancy that idea, do I get to wear big boots and jump up and down on a piano? The whole idea comes from both of us, so Dan has a lot of input into the songs, and I have a lot of input into the words. The characters we play are kind of exaggerated versions of ourselves, so Dan is the new younger, modern runner who always wears his GPS and his heart rate monitor.  I actually don’t have anything to do with any of that, I just set off to where I haven’t been before. We have these characters so it does have drama, and it’s not just two people having a discussion.”

I was watching Chumbawamba’s appearance on the Letterman show at the height of Tubthumping mania and it struck me it must have been a surreal experience for a bunch of anarchists going from a Leeds squat to a hit late-night US TV Show?

“It was probably even weirder than you can imagine, I’m still completely astonished, and in a way that’s the lovely thing about it. There’s so much nowadays of arts and culture that is pre-planned, people grow up thinking that they can learn these things, and work out a career path in the arts, music and in bands. Obviously, programmes like the X-Factor, and The Voice now, pander to homogenising everything.”

So despite that unexpected chart success, and tipping an ice bucket over John Prescott’s head at the Brits, you still managed to stay true to what made you want to start a band in the first place?

“When I was a kid we wanted to do this thing because we’re a gang and that remained true even when we were playing on the Letterman show. We were still a gang being naughty and we were still seeing what we could get away with. We still had absolutely no regard whatsoever for whether something would hurt our commercial viability or anything like that. We just completely ignored all that.”

The nostalgia circuit was very successful before lockdown for bands with hits way less huge than Tubthumping, so is there any chance of the band reforming to join up?

“I’d love to say there’s absolutely no chance, and I’m fairly sure there’s absolutely no chance, well yeah, there’s no chance. We’ve been asked about a lot of these nineties tours where you get paid tons and tons of money to do 3 or 4 songs. I can’t think of anything I would less like to do than that, I really can’t, it would just defeat everything that I think about music and rock and roll and rebellion.”

These Hills Are Ours will head out on a national tour when restrictions are lifted and for more information go to http://www.danielbye.co.uk/these-hills-are-ours.html

The post Interview: Chumbawamba’s Boff Whalley takes to the hills for a new theatre show. appeared first on Louder Than War.