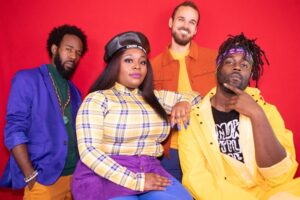 They may not be well known over here, but the underground success of New Orleans based Tank and the Bangas won them a Best New Artist nomination at this year’s Grammy Awards.

They are described as fusing funk soul, hip hip, rock and spoken word with what they call ‘Disney Soul’. Their single Self Care features the big vocals of frontwoman Tank Ball, plus the added talents of Jamie Woods, Orleans Big and Anjelika ‘Jelly, Joseph.

Like so many artists Tank is marooned at home by the pandemic so used the time to answer some questions Louder Than War sent her.

Hi Tank, tell Louder Than War readers where did you start your singing career?

I started my singing in church, but the career part came a little later. I used to frequent two open mic nights called Liberation Lounge and Pass it On. These places helped me find my voice.

You started as a slam poet so why make the switch to singing?

For the uninitiated how and where did the band start?

The band never started so we can never finish. We just are.  I’m just kidding, we began at that open mic night Liberation Lounge.

How influential is New Orleans on your sound?

The performance aspect of it is definitely there, every now and then we add influences of jazz and bounce music. And just the overall raw realness and spirit that New Orleans provides.

Who are the band’s core members?

Well, there’s myself TARRIONA TANK BALL. And then over there is Albert and Norman. Oh yea, and Josh over there too somewhere!!! Those are the core members. But the entire stage band is full of wonderful musicians that we’ve been playing with for years.

Always a tricky question, but can you describe your sound?

What is ‘soulful Disney’?

It’s when Disney inspires special people from the hood to make their own kinda magic.

Tell me how you won the NPR Tiny Desk contest?

Aight. So boom…. our manager set it up like it’s a gig (so we wouldn’t be late) and we changed our song last minute. Thank God, because it obviously changed our lives.

How surprised were you to get a Grammy nomination for Best New Artist?

Your single Self Care has a pretty big cast list so how did that come about?

When bands finally get back on the road can the UK expect a visit?

Of course. That’s our second home. All love.

The post In conversation with Tank and the Bangas appeared first on Louder Than War.

Interview: Millie Manders and the Shutup take a more direct route on their new album