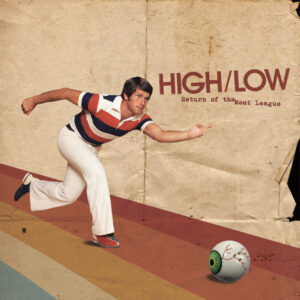 Return Of The Meat League

Southend fuzz-rockers, HIGH/LOW, keep their EP series on track with their 5th release this year, Return Of The Meat League.

Only last month we reviewed, Milk Moustache, the 4th EP in HIGH/LOW’s series of EPs this year that will ultimately come together with selected tracks due for release on their 2021 dual release album Cyclops I and II. As with their previous EP, their 5th in the series, Return Of The Meat League, has been released primarily through the band’s Bandcamp page at the price you want. And, as for any fans of souped-up, fuzzed-out 90’s style alt-rock à-la Dinosaur Jr, Weezer, and early Foo Fighters, they will, again, certainly not be disappointed.

Slow Motion Runner wastes no time at all kicking things off with Steve Weston’s signature guitar sound, one that he crafted for himself through his own Raygun FX pedals (definitely worth checking out for any guitar nuts out there). The doubled up and modulated vocals follow the simple melody, all coming together as one and coming close to the sound of Feeder at their best. From there they’re straight into Wanna Go Back, which, as with previous releases, really mines that Pinkerton Weezer vibe with a dose of laid back rhythm that grooves the song along.

Teenage Skeleton is done and gone in less than 80 riotous seconds before Stitches slows off the pace a touch. Their fx running through a beefy and crunching bassline really drives the song along and the lead guitar flies along while the vocals feel more wistful than on their previous work. Lookout ramps up the pace again before they sign off with the wondeful Give It All, a song that could have come straight off the Foo’s Colour and Shape.

It’s great to see that, despite the shit-show-spanner-in-the-works year that is 2020, some bands are still managing to pull off what they set out to achieve 11 months ago. On track and on time, HIGH/LOW will no doubt see out the year with their series of six EPs released and ready to launch their dual album release in January 2021.

Listen to Return Of The Meat League below.

The series of EPs are available from the band’s Bandcamp page, and Cyclops I and II are available on pre-order from Instereo Records.

The post HIGH/LOW: Return Of The Meat League – EP review appeared first on Louder Than War.