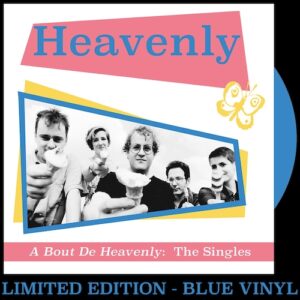 Amelia Fletchers band after Talulah Gosh, “every one of their 7″ singles that were originally released by Sarah, K & wiiija Records” 1990 -96. Ged Babey discovers they were not the twee ‘Famous Five Go Indiepop’ he thought they were.

This is gonna be one of those reviews that doesn’t actually dissect the songs/music… my normal ‘style’… so forgive me if that is what you expect from a review.

if you take the elements and essence of ‘What Do I Get?’ and ‘I’m Sticking With You’, mix them together, stir, simmer… you get Heavenly.

Despite having faithfully listened to Peel from 1978 onwards, following all kinds of punk-and-thereafter music obsessively, I never spent any time closely checking out Amelia Fletcher and Rob Purseys bands (from Talulah Gosh right through to Catenary Wives) – and I really don’t know why.

Tellingly perhaps, the only song that I do know inside-out by them is P.U.N.K Girl. Taped off Peel. Probably a Festive 50.

I’m not going to retell the story of the Fletcher/Pursey bands because, if you reading this, you know the history.

I am gonna try and explain my former lack of interest and objectively tell you that, after hearing this singles collection, Heavenly were one of England’s best pop singles bands in their timeframe.  And how only their stubbornly righteous independence kept them from being ‘bigger than the Cardigans’.

And that’s not taking the piss. The Cardigans are a decent successful band – and their debut album was very much in an ‘indie-pop’ style.

Amelia Fletcher, who has come to personify English Indie-Punk-Twee, is two years younger than me – so a 12 year old when Buzzcocks / Undertones hit the charts. In this fabulous radio interview she sites ’60’s Girl Groups’ as an influence (that we both share).  So why did I unconsciously avoid Talulah Gosh and Heavenly?

I suppose they seemed too weedy, insubstantial and ‘middle-class’ – a jolly hockey-sticks Famous Five version of Punk (the DIY Buzzcocks version).

Still preferable perhaps to the Bash Street Kids punk of Oi! and UK82.  But I was too enamoured with the earnest intensity of post-punk and the Hammer Horror of Positive Punk which begat Goth…

The History of Punk narrative has become: everyone got bored with punk and it became homogenised and subsumed into the Music Biz quickly. In fact, the seeds were sown far and wide and a dozen independent and very different variants bloomed – and one of them was the anorak/shambling Talulah Gosh strain – which later became categorized as Indiepop, C86, Twee, Cutie….and with each subsequent label de-valued in the eyes of all but the faithful.

With the benefit of hindsight, it was arguably more radical and forward-looking than Goth or Discharge or Scritti Politti. It stuck to the staunchly independent DIY label model of New Hormones, Fast and Postcard. (Creation and Factory were the ambitious exceptions).  It avoided explicit ‘politics’/protest -why preach to the converted?  It incorporated an instinctively natural kind of diversity – boys could reject machismo, girls could be androgynous – no-one was bothered as long as the music melded sixties idealism and punk energy and charity-shop Sixties chic.

Of course bands like the Primitives (with their pushy manager) broke into the mainstream – but they were the exception. The Sarah Records bands remained stubbornly independent – not because of lack of potential or quality, but thru sheer righteous belief that art does not necessarily equal ‘product’ and commercial success would not lead to personal satisfaction.

It does intrigue me that Amelia Fletcher, in her day-job, after further education, rose to the very top of her profession at the Office of Fair Trading. Justice. Fairness. Accountability. Joe Public not getting taken for a ride by Big Business. All seems very in-tune with the vague ideologies of independent punk rock and the English idea of ‘fair play’.

Heavenly had a fresh-faced and bright-eyed optimism and old-fashioned Englishness about them, but being a part of the International Pop Underground -coined by Calvin Johnston and links with K Records and Riot Grrrl gave them a wider international appeal and audience.

Heavenly were such a brilliant band. VERY under-rated by many, and very loved by those that got it.

Peter is one of the best guitarists ever, and i don’t mean in a flash of technical way…very original, and off the wall in style, It annoys me so much when I can see absolute genius talent, get overlooked in favour of what those who decide these things tell us (Marr, Squire, Butler, etc… YAWN! )

Amelia’s songs were just perfect, and often with a serious point being made, but without the feeling you’re being lectured. .Opps! I’m writing a review here for you…But yes, they were ace as were all their other associated bands.

Cathy Rogers was a vital part of the band too.  Her harmony vocals and keyboards became an integral part of the group… particularly ‘Atta Girl’, in which Amelia and Cathy sung in rapid-fire trade-off vocals.

Amelia Fletcher is an unsung heroine of the UK Pop underground: her indie-kid-Hepburn style is forever cool and her songs of love and disillusionment are classics. Songs covering rape meant it wasn’t all sweetness and light. There was a darkness too. Reissuing Heavenly material must bring back painful memories of the reason the band ended: Drummer Matthew Fletcher took his own life in 1996. It was five years later Amelia and Rob formed Tender Trap…

The Heavenly singles collection is just that: Heavenly. Near-perfect. Buzzcockian genius. I should have listened without prejudice at the time, but thankfully now, I have this compilation and have seen the error of my ways.

‘What Do I Get?’ and ‘I’m Sticking With You’ by the way, are two of the greatest songs ever written… Heavenly.