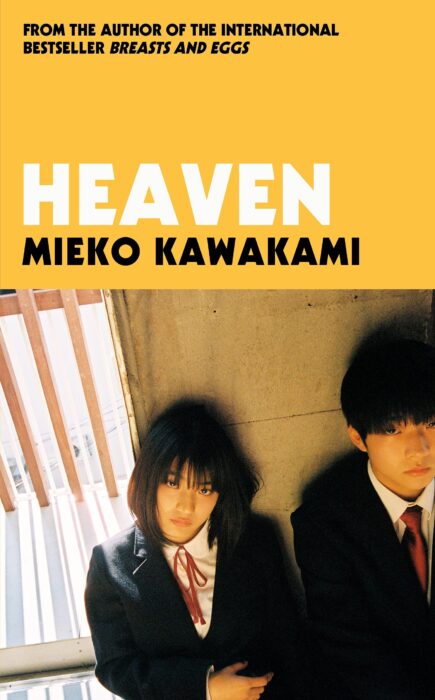 A newly translated – but older – novel from Mieko Kawakami, Heaven is missing some of the spark of the revered Japanese author’s other work. Elliott Simpson reviews.

2020 was quite a year for Mieko Kawakami. Though she’s long been acclaimed in her home country of Japan, the release of her first English-translated novel Breasts and Eggs saw her audience explode. And rightly so. Breasts and Eggs was one of the most talked-about novels of last year, exploring sexism in modern Japanese society with a fresh perspective. Touching on topics such as body image and the stigma around single mothers, it’s a novel with a lot of power to it, even if the story at times felt like it was secondary to the themes, rather than the other way around. As a result, it’s no surprise that there’s been a lot of anticipation around Kawakami’s next novel.

And with Heaven, the wait is finally over – sort of. Though it’s the second of her novels to be translated into English, it is, in fact, a much older one, preceding Breasts and Eggs by almost ten years. Heaven tells the story of a fourteen-year-old boy who’s tormented by his classmates for having a lazy eye. One day, he begins to form a friendship with a girl in his class – Kojima – who’s similarly harassed by the other children for coming from a poor family. They keep their relationship a secret and try to form a way to stand up to their tormentors together. The reason it’s worth noting that the book came out long before Breasts and Eggs is because it’s a lot rougher around the edges. Whereas Kawakami’s voice feels very defined in that novel, here it’s a bit more unfocused.

Heaven is a lot shorter and simpler but in many ways a much more difficult to read. Kawakami spends a lot of time focusing on the different ways the protagonist is tormented by his bullies, with these growing increasingly worse as the novel goes on. He has the belief that he should suffer in silence, never standing up to the bullies, which makes much of the book a little frustrating to read. Paced very slowly, it never feels as though it really gets past its first act, with the protagonist growing very little until the end of it all. Heaven is at its best when it focuses on the bond between him and Kojima, the girl he makes friends with. There’s something sweet and universal about their relationship, and it acts as the novel’s heart as well as the main thing driving it forward. It’s a shame that everything around it feels a little underbaked.

Though Heaven has some flashes of greatness to it, it’s a difficult book to recommend to anyone but huge fans of Kawakami’s other work. It provides an interesting glimpse into her journey as an author, but it doesn’t quite come together as well as you’d hope for. Still, it’ll be very exciting to see what she comes out with next.