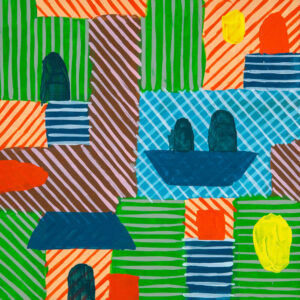 Half Japanese return with album nineteen and prove that 40 years on from their debut, they are still as vibrant and essential as ever.

The last time we took a look at one of Half Japanese’s albums it was 2016’s Perfect. Since then, Jad Fair and his now solid line up have hit on a spree of releases, one a year right up to this year’s Crazy Hearts. As a band, not only are they on a prolific run, but are also on inspired form and this new album is a lesson in the twists and turns of lo-fi experimental post-punk that has made the band so influential since their inception at the tail end of the 70’s. It’s no surprise to hear how important Jonathan Richman’s Modern Lovers were to the initial formation of Half Japanese and, on this new album, Fair and his band draw on their influence like never before. Songs like Undisputed Champions and the wild-eyed opener The Beastmaster harness the Lovers spiked rhythms and lyricism like few of Fair’s previous releases have.

As with many of their previous releases, it’s his fascination with monsters and love that dominate the lyrical themes. The loping Late At Night picks up where The Walking Dead from last year’s Invincible album left off, with it’s focus on night crawling zombies, while the hypnotic title track is a blissful trip full of almost nursery rhyme lyrics.

Listening back through Half Japanese’s back catalogue, it’s clear to see just how much impact they have had on the indie landscape. Without their warped lo-fi sounds, the likes of Violent Femmes, R.E.M., Pavement, Eels and others that followed the path they ploughed may never have found that lyrical guile that Fair excels in. He almost pays it back on early album highlight, Wonderous Wonder, on which his phrasing recalls early Stipe, the influence coming back round in full circle. It’s also a song that brims with a life-affirming positivity that is impossible to resist.

Throughout the whole album they flit and shift, never staying still and settling into one groove, yet always cohesive in the overall style that they have crafted. Right up to the end, on the joyous bouncing summer psych-pop of Let It Show, they keep you guessing. Crazy Hearts feels like a realisation of Fair’s dream to follow in Richman’s footsteps. While it may seem too polished for those who prefer the crazed deshevelment of their first recordings, it is a must for those fans of the band that have traced their development of the last forty years, and the perfect record for new fans to dive into their back catalogue from. A triumph!

For further information on Half Japanese, please check out their Facebook.