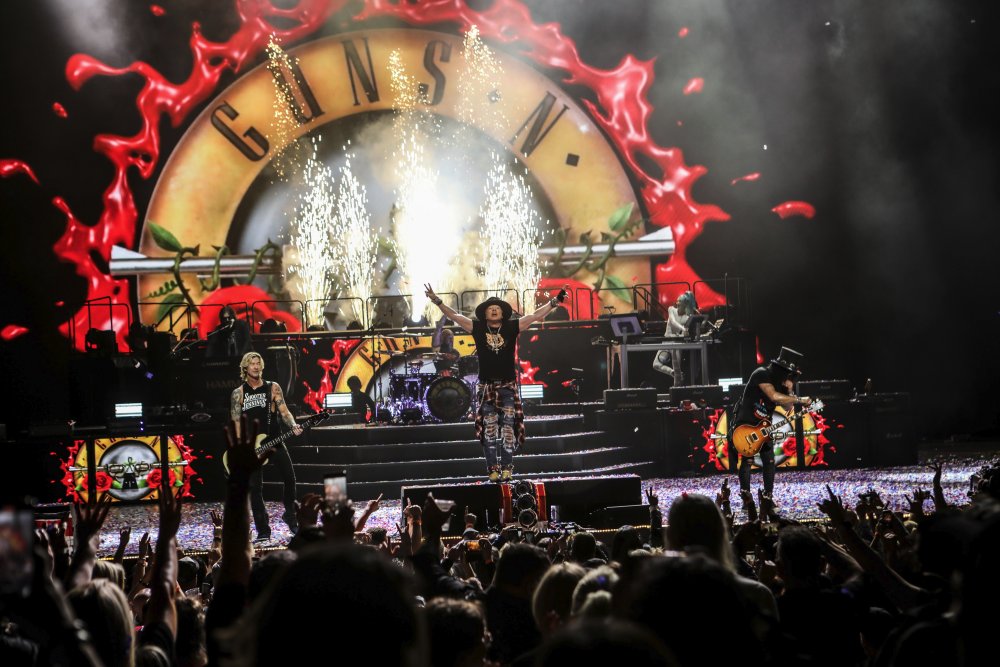 Guns N’ Roses made our collective rock’n’roll dreams come true with 2017’s Not In This Lifetime tour and now Paul Dainty AM, President & CEO of TEG DAINTY is thrilled to announce one of the greatest bands of all time will return to tour our shores in NOVEMBER 2021.

As the first stadium tour announcement since the advent of COVID-19 and border closures pressed pause on touring, it’s fair to say our appetite for live music performances by international megastars has peaked and in Guns N’ Roses we trust!

Kicking off in the Gold Coast on Saturday 6 November 2021 at Metricon Stadium, Guns N’ Roses will then tour to Adelaide Oval on Tuesday 9 November before gracing the Melbourne Cricket Ground on Thursday 11 November. Next up, the band heads to Sydney’s ANZ Stadium on Sunday 14 November, then Brisbane’s Suncorp Stadium on Tuesday 16 November before Perth’s Optus Stadium hosts the final stop of the band’s 6-city Australian tour on Wednesday 24 November.

Tickets go on sale from Thursday 26 November. Head to www.tegdainty.com for all ticketing and tour information.

A Telstra Plus member presale starts Monday November 23 and is open until Wednesday November 25.  Go to telstra.com/music for further details.

Paul Dainty, said, “Announcing an international tour of this magnitude as we come out of the most challenging year in the history of live entertainment is truly gratifying.

We’re all eager to return to business as usual and who better to lead the charge into international stadium touring than the mighty Guns N’ Roses! Witnessing the classic line-up of Axl Rose, Slash and Duff McKagan, reunited, on Australian stages during this historic band’s previous Not In This Lifetime tour was an unforgettable experience for fans and the reviews were unanimously glowing.

In 2021 Australians can look forward to the return of large-scale stadium events such as this and, let’s face it, Guns N’ Roses deliver every single time.”

Recorded simultaneously and released in 1991, Use Your Illusion I (4x Platinum) and Use Your Illusion II (5x Platinum) debuted at #2 and #1 respectively on both the ARIA Albums and Billboard Top 200 charts. Hit singles from the ‘Illusion’ albums included You Could Be Mine, the band’s Live And Let Die cover, Civil War and November Rain. The band’s 2004 9x Platinum Greatest Hits compilation also topped the ARIA Albums Chart, remaining in the Top 100 chart for a colossal 452 weeks.

As the name of GNR’s 2017 tour suggests, many GNR fans once believed that they would only be able to experience founding members Axl, Slash and Duff sharing a stage again in their dreams. But then the band’s classic line-up regrouped for Coachella 2016 and the Not In This Lifetime tour was announced shortly afterwards, thrilling fans all over the world until November, 2019.

The Australian leg of Guns N’ Roses’ Not In This Lifetime stadium tour marked the first time that Australian fans witnessed Axl, Slash and Duff reunited since 1993’s Use Your Illusion tour and the band’s onstage chemistry was undeniable.

More than 75,000 fans rocked-out at the MCG during GNR’s blistering 2.5-hour set, with Triple M reporting, “The band was on fire, pumping on all cylinders.” And the rave reviews kept pouring in, with News.com.au extolling, “Guns N’ Roses turned the dial up to 11 and jolted an exuberant crowd with a hard rock tour de force.” Courier Mail were also suitably wowed: “This was an act at the top of its game: there was not a musical misfire to be heard and the tight, high-energy production would have been the envy of musicians half their age.”

GNR’s 2021 Australian tour is the light at the end of the bleak tunnel we’ve all negotiated this year. All aboard the Nightrain to Paradise City for what promises to be a heaving celebration of the unbreakable human spirit!

YOU DEFINITELY DON’T WANNA MISS THIS ONE!

Tickets on sale from Thursday 26 November 2020.
Head to www.tegdainty.com for all ticketing and tour information.

A Telstra Plus member presale starts Monday November 23
and is open until Wednesday November 25.
Go to telstra.com/music for further details. 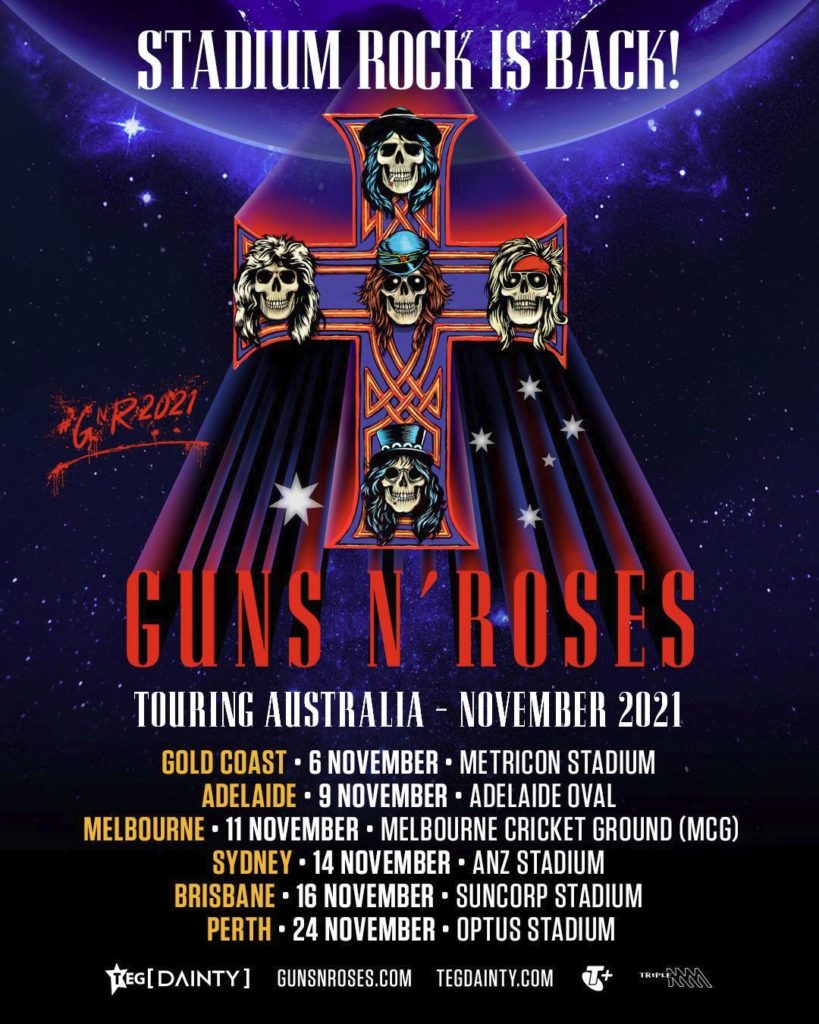