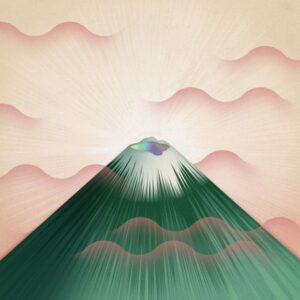 Turning up the volume, Cardiff-based songwriter Gruff Rhys continues his string of harmonious solo albums with a bold and fuller sounding new LP. Dave Beer listens on repeat for Louder Than War.

It’s probably not wise to open a review with a description of cardboard, but I can’t help noticing that it takes me an extra minute or two to crack into the shiny white vinyl of Gruff Rhys’ latest album Seeking New Gods. A brilliant piece of design by the artist Mark James, the sleeve design is fairly unconventional; with a volcano adorning its front, the sleeve is structured a bit like a big envelope. There’s also a card band wrapped around the album that seals it all in place. And so there is a brief delay as I carefully find my way into the packaging. An enforced slowdown, a pause. That is Gruff Rhys embodied in some folder paper: unconventional and reflective.

An unpredictable musician and songwriter, Gruff Rhys never seems to want settle into anything close to a style, at least not for more time than is required to make a coherent album. An artistic sensibility and creative impulse seem to push Rhys’s music in different directions.

There are, of course, recognisable aspects to his sound. Yet the songwriting always seems to be restless, with Rhys trying out different arrangements, collaborations, sounds and approaches. Throughout these shifts, always on display is Rhys’s undoubted knack for melodies. They are always strewn across his records. Typically, this new album is full of them. Bolstered by a live band, on Seeking New Gods these melodies are woven into a more layered and textual sound. The effects are powerful. This is Rhys amplified and plugged in. It’s a bigger and fuller sound than might be expected, a lusher and rockier sort of palette has been used to flesh out the songs.

This new album follows another previous pattern. Rhys’s outputs often arrive with some overarching idea or concept that holds them together and these concepts seem to be used to fuel the variety of styles. In a recent podcast interview, Rhys spoke of how the songs usually arrive first and then they begin to cohere into these overarching visions, rather than the other way around. The concepts are intended to serve the songs.

In the album notes and artwork, Seeking New Gods is presented as a series of tracks that are based around “events relating to Mount Paektu, from 2333BC to the present day”. Covering a few thousand years of time in nine tracks is clearly very ambitious. It would be easy to get caught up in the suggestive mountainous and volcanic imagery, but this particular trip seems like a detour; the album comfortably stands up in its own right without the need for this concept. Mount Paektu might have inspired the album’s substantial tracks but it doesn’t limit or define them.

Still, there remain moments where you can see the mountain peaks in the music. The puns of the highly hummable Loan Your Loneliness conjure mountain top desolations. The riff-laden track Hiking in Lightening draws the most direct lyrical references. The sound of the record itself is also windswept. Yet in the album notes Rhys also observes that this is a collection of songs from a “very personal place”. Listening, I begin to wonder if the talk of mountains is a way of handling these more personal aspects of the music. The mountain becomes a means of articulating something else rather than detailing the crags and ridges of history.

Overall, the concept probably wasn’t needed for the album to have worked, or for it to have felt coherent, especially as the sound across the tracks is so well-rounded and consistent. At the same time, the imagery it sketches out does feel pertinent for the moment and there are obvious parallels between personal struggles and mountainous terrains. Yet the songwriting takes this collection of tracks quite a distance from that apparent source of inspiration. Unlike the solid central hook and clear narrative adventure that defined his 2014 American Interior album, where Rhys set off across America following the trail of a distant relative, Seeking New Gods roams far beyond that volcano.

The songs gathered together here were written and recorded prior to Rhys’s more experimental 2019 album Pang. Seeking New Gods features the same band that appeared on his 2018 Babelsberg album and signs of that earlier collaboration are found all over this new record. This is the sound of a band who have played together extensively. As a result, it recaptures some of the live sound of Babelsberg, whilst at the same time it electrifies the more acoustic tones of that earlier album.

The collective of musicians who have worked on Seeking New Gods, all established and experienced musicians in their own right, mean that this record has much less of the solo DIY-type aesthetic that can be found on Rhys’s earlier records, especially on his first solo LP Yr Atal Genhedlaeththird, and to a lesser extent on his third album, Hotel Shampoo. It feels like the band are established in their collaborations and that they are filling out and developing aspects of the sound.

With the sound of the band coming to the fore, Seeking New Gods also feels more organic than the sharp electro edges of the Neon Neon side projects that Rhys worked on with Boom Bip. Perhaps there is something of the history of the tracks coming through in the final record. The band had been touring together when these songs were being honed and there is a well-worn groove to the sound. Consequently, this is probably the fullest-sounding of Rhys’s solo albums, and it is also the most live-sounding.

The album closer Distant Snowy Peaks is probably the standout track. Layered harmonies circle around those peaks. As it soars, it offers a slightly more fragile closing moment to a bold collection of tracks. The grittiness of this year calls for some warm melodies and Gruff Rhys is able to pull them from the volcano-ashen air.

More information about Gruff Rhys’ music can be found here.