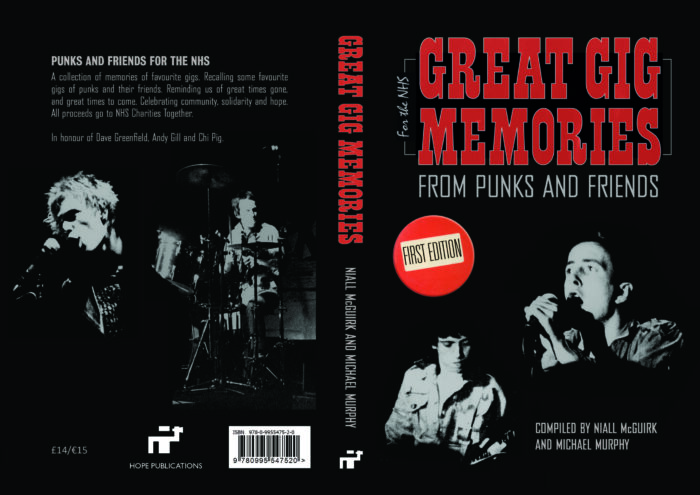 This is a scrap-book-style, eye-witness oral-history of punk… and a good reminder that most musicians are fans at heart – say the compilers in the introduction. And basically a great Xmas present for the music-mad punk-fan in your family, says Ged Babey.

The Hope Collective, Dublin say… For many of us going to gigs is how we socialize and celebrate our community. That has been taken from us as Corona Virus spread quickly across the globe.  We felt helpless… We felt a need to do something. so we reached out to the community we know best.  Great Gig memories is a collection of Favourite Gigs. Recalling some gig memories from punks and their Friends. Reminding us of great times gone and great times to come. Celebrating Community, Solidarity and Hope. All proceeds go to NHS Charities Together.

Basically, this brilliant!  Two hundred different short-stories entitled the Best Gig I Ever Played/ Went To Was…

There are contributors from across the punk spectrum; national treasures like Charlie Harper, Knox, Steve Ignorant, Beki Bondage and Atilla the Stockbroker. loads of band members, promoters, writers from Ireland, representatives from The Ruts, Paranoid Visions, Gang of Four, The Cure, SLF, Rollins Band, Shudder To Think, DOA, Hagar The Womb, The Vulpynes and so many more – talking about gigs they played or attended by the likes of Pistols, Buzzcocks, Black Flag right through to unknowns like God Told Me To Do It and Dead Ringer & the Clones.

Some tell tales from gigs they played, others of gigs they attended. Some are several pages and beautifully written.  A few were hurriedly written on the back of a fag packet!

The gigs discussed cover the UK, Europe, the USA and Ireland (and at least one each in Australia and New Zealand) – and the artists are not exclusively punks.

There are two accounts of Jimi Hendrix gigs (from Charlie Harper and Knox) Bert Jansch is eloquently covered by John Perry (the Only Ones).  The Pogues, Led Zep. Smiths, Cure, Slayer, Bob Marley, Green On Red, Kinks all get entries, it’s a wide variety -which is the beauty of the book – but the central theme is the blinding glory of a great punk gig -and all that entails – from the threat of violence in the early days to the joy of us-against-the-world camaraderie.

To be blunt, it’s a book for people who don’t read a lot of books -and when they do it’s books about their obsession – music. People like me.

Some contributors went to great pains to describe the whole gig, the background, lots of details, the aftermath.  Others just recall the life-changing euphoria of their first mind-blowing gig as a young teenager.

As in life, ask 200 punks about their Most Memorable Gig, you get 200 completely different answers – some name-dropping and ego-centered and others refreshingly objective with the benefit of hindsight and age.

The timescale covered is the Late-60’s to Now – and some key gigs are covered: The Shend on the Cravats performance at The Last Supper and an account of ATV at Greenwich Fee-et-ah for me were welcome inclusions.

The compilers seem to have operated and open-door, no edits, no word-count restrictions approach so you get some compelling, detailed accounts – Henry Priestman on the first Liverpool punk show, Johny Brown on meeting the Pistols at a SPOTS gig and the absolutely brilliant story of Irish unknowns  Zerra One and their tour with the Cure.

As a collection it holds together well. The stories are funny, brilliant, strange and inspirational and come from a multitude of voices – with the enjoyable heavily outweighing the not-so-worthwhile  -all human punk life is here – from old farts to young guns. Famous to unknowns.

Bands like the Clash, the Stranglers, the Ramones and Black Flag crop up in multiple stories and pleasingly so do the Poison Girls – with tales of their generosity in talking to fans and being an inspiration.

How to make a punk book sell?  Put the Clash on the cover. The old NME typography looks great as well, doesn’t it.

Seriously, I have learned a few things from this book about various bits of untold ‘punk history’ that I never knew.

There are some laugh-out-loud bits, the odd, what-a-load-of-bollocks story, but it all adds to the overall enjoyment of a very worthwhile book by punks for punks.

It is a bit on the pricey side, but the profit is for a worthwhile charity so don’t be a tightwad.

Great Gig Memories: From Punk and Friends does exactly what it says on the tin.

Not available in any shops.  Buy from Here.