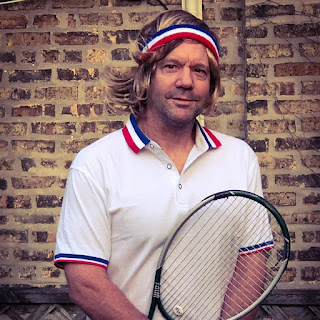 Recently endorsed by Rodney Bingenheimer, the new single from Golden Richards is a new wave rock anthem that sounds like it’s straight out of 1981! Gil Golden and Billy Richards have based this Chicago power pop band on their mutual love for the pop culture of the 1970s and early ’80s. They have cited inspirations such as Bruce Lee movies, tetherball, Farrah Fawcett, surfing, Bubble Yum, Trans Ams, and the Bjorn Borg/John McEnroe tennis rivalry. “Borg Vs. McEnroe”, appropriately enough, is the band’s debut single on Big Blast Records.

While Borg/McEnroe might not technically be the greatest rivalry in the history of tennis, it was by far the coolest. Thoughts of this rivalry take me back to those pre-cable days when televised sports were a huge part of popular culture (some of you old school Chicago folk will recognize that the band name Golden Richards is itself a sports reference!). And what made the rivalry special was that it was so short-lived. Borg and McEnroe met only 14 times on the pro tour, splitting their matches 7-7. And their legendary showdowns in grand slam finals were limited to four matches in 1980 and 1981. When those two faced each other, it was must-see TV! On one side, you had the handsome, cool-headed, and supremely talented Swede. On the other side, you had the intense, hot-tempered New Yorker McEnroe. You were out of luck if you missed their iconic matches – as Borg shocked the world when he retired from tennis at the age of 26 (a total bad-ass move!). Thus the mere mention of Borg vs. McEnroe always takes the mind directly to the years 1980-81. With its big guitars, big hooks, and sprinkling of keyboards, “Borg Vs. McEnroe” fittingly sounds like a lost radio hit from a moment in time when the likes of Blondie and The Cars ruled the airwaves. It also has a bit of a rock anthem feel to it, with playfully over the top vocals and some guest guitar shredding by Mark Down. In a stroke of a genius, the band uses actual recordings of McEnroe’s on-court tantrums in the background! I was a big McEnroe fan growing up. But even if I hadn’t been, I would still be thrilled by this callback to the infinite coolness of the early ’80s. If this theme continues, Golden Richards are not likely to run out of songwriting topics anytime soon! How epic would a “Roper Vs. Furley” song be?