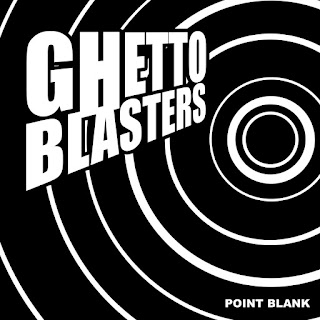 Ghetto Blasters are a band that put the rock and roll in punk rock and roll! This Chattanooga, Tennessee based foursome has just released a new 7″ (its second) on its own label, Mondo Trasho Records. These guys have toured as Frank Secich’s backing band, and they’re also pretty great in their own right! You may know guitarist Buddha from his long and distinguished career playing in bands such as Chickenhead, Stun Guns, and Los Canadians. Justin Savage, his bandmate in Fast Boys (MIA), is on guitar and vocals. Man, that dude can belt it! Point Blank, the new record, manages to combine the grit and fury of early American punk with the thunder and strut of ’70s arena rock. These three tracks possess a tremendous energy, and that guitar tone is totally bad-ass! All at once, my fondness for the Dictators, Dead Boys, and AC/DC is fully engaged. The title track locks into a tough mid-tempo groove, while “Youngblood” and “Let It Rock” rip harder and faster with zero excess. This is basically ’70s rock and roll with all of the fat trimmed off. The American south has long been an overlooked stronghold of garage punk, and Ghetto Blasters are yet another example.