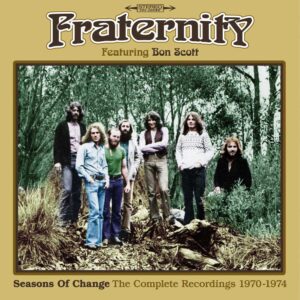 Boxset that includes the complete recordings from 1970 to 1974 of the Sydney-based prog rock band Fraternity, which included a pre-AC/DC Bon Scott for a large part of their career. This collection features the officially released albums Livestock and Flaming Galah plus a selection of previously unissued material entitled Second Chance….Ian Canty feels the brotherly love…

Fraternity formed in Sydney, New South Wales in 1970, out of the ashes of a late 60s line-up of long-running r&b outfit Levi Smith’s Clefs. Under the Clefs’ name they had just cut the highly rated album Empty Monkey, but were disenchanted with singer Barrie McAskill and the overall lack of progress of the band. The minds behind the Sweet Peach label which issued the album, Jimmy Stewart and Dennis Whitburn, persuaded the band to stick together as a four piece without their erstwhile vocalist. They moved the band from the Sweet Peach’s Adelaide base back to Sydney and also set them up with accommodation in the city. Fraternity were born.

The key founding members of this first Fraternity aggregation were bass player Bruce Howe and guitarist Mick Jurd and they were joined by drummer Tony Buettel and John Bissett on organ. This initial version of the band recorded the Why Did It Have To Be Me/Question single, which was released as the debut Fraternity waxing on Sweet Peach in the year of their formation. These two tracks feature as bonuses on the first disc here and depict a band busily finding its feet in a post-psych landscape with a couple of attractive and listenable songs.

The top side was a song by another artist signed to the label, Doug Ashdown, who the band had backed on his Age Of Mouse LP. Overleaf was a Moody Blues cover and although the record was well received in the music press, it only charted locally in the Adelaide locale of Sweet Peach. The singing is pretty tuneful and well suited to the material though, but things were about to change radically on the vocal front.

At this point in time Howe and Bissett were sharing lead vocals, but word got aound that successful pop act The Valentines were on the verge of splitting up. Singer Bon Scott was highly-rated, so lacking a natural frontman Fraternity made their interest in him known. Some members had doubts, but bandleader Howe believed it was the right move, so Bon subsequently joined Fraternity and soon put aside any lingering concerns with his vocal skills.

The band’s first album Livestock soon followed. It starts with the title track, a gentle enough post-psych boogie and this is followed in similar fashion by Somerville, though the latter is distinguished by some nice organ swirls and funky touches. They both give the listener a good idea from the outset of what Fraternity were all about at this stage in their development.

Raglan’s Folly follows in a more impressionistic prog style, with portentous keyboards, soaring vocal and pipes flowing in and out, underpinned by a marching beat. It’s the only writing credit Bon gets on the album and a long way from what he became best known for later in the 1970s, but is elegantly sung nonetheless. The exotic rhythm of Cool Spirit ended side one of the original LP and shows what they had to offer in a more pop mode.

Flipping the disc over Fraternity open up with more pipe and guitar prog sounds on the instrumental piece Grand Canyon Suites. Then comes the soul/psych of Jupiter, some good guitar work again here, before You Have A God, which called Procol Harum to mind. The lengthy set closer It is more of a jam and bit “of the time”, but provides a fitting conclusion to Livestock, which as a whole is a good enough prog/blues rock offering.

In addition to the aforementioned two sides of the debut 7″, as further bonuses with this disc we get single versions of Somerville and also the reflective Seasons Of Change, which was also included in a different form on the band’s second LP. Finally we have both parts of The Race single, which are both more bluesy romps than anything else.

The second Fraternity collection Flaming Galah, with the title being a piece of Aussie slang which I can’t quite shake the image of Alf Stewart from Home And Way saying, was released in the spring of 1972. By this time Fraternity had swelled up to a seven piece with the additions of Sam See on guitar and piano and John Eyers on harmonica. John appeared in a guest role on their debut album. They also had left Sweet Peach for the RCA label. Here the band tapped more into a back to basics r&b sound, not unlike The Faces in the UK and also The Band’s work in the US seems very influential on Fraternity at this point (indeed a cover of The Shape I’m In appears as a bonus track on this disc).

This new tough, street blues style was right up Bon’s alley and although a lot less frantic than AC/DC, it does help to give one a clear idea of where he was heading. Perhaps there was a bit of a lack of new material in the Fraternity camp though, as they recut Raglan’s Folly, You Have A God and Grand Canyon Suites (as Canyon Suite here) from the first LP. But this was mainly because the band had just won Hoadley’s Battle Of The Bands competition, a big deal at the time in Australia and part of the prize was access to free studio time. The old material, which also included the previously released single Seasons Of Change and a rejigged Cool Spot retitled Annabella, that was recut does however supply some variety. This is something that helps to brighten the collection a touch.

Elsewhere though there are a lot of neat Ian McLagan electric piano thrills and when the band really get going they can kick up a storm, like on the rockin’ Getting Off. If You Got It certainly passes muster, a powerful r&b number that really cooks and sums up their new, less experimental attitude. The driving blues of Hemming’s Farm displays the band well at full throttle too.

After recording Flaming Galah, Fraternity were relocated to the UK by their manager Hamish Henry, with the aim of furthering their career. Some recordings and gigs supporting Slade, Sweet and ironically Brian Johnson’s Geordie didn’t generate much in the way of interest and the band returned to their homeland the next year. Bon Scott soon after joined AC/DC, but Fraternity eventually continued with an almost totally different line up, Bruce Howe being the only original band member.

The final disc of Seasons Of Change is entitled Second Chance and collects up various odds and sods, including the recordings the band made on their sojourn to the UK and backing Bon’s Valentines’ bandmate Vince Lovegrove. It begins with the disc’s title track, which is an entertaining, freewheeling rocker recorded by a reconstituted version of Fraternity just after Bon Scott’s exit. Then comes the six tracks the band recorded in London in 1972, which include a good version of Cool Spot. Fraternity sound a bit uncertain vocally on slower material Requiem and Patch Of Land, but the more uptempo Tiger and Hogwash are more assured and show the band much better off with a blues swagger. The latter has some novel echo effects that give it a boost as well.

Chest Fever, a Band song which was sung by John Bisset and Bruce Howe, was Fraternity’s live set opener. This track tees up things nicely for the next four efforts tracks, taken from a live show at Port Lincoln. The fidelity is a bit dodgy here, with the vocals low in the mix. But they run through a lively go at Chuck Berry’s Little Queenie, yet another Band song in Just Another Whistle Stop and also the unrecorded Mick Jurd song The Memory. This nears rock ballad territory with a jerking blues rhythm and some pop appeal, which made me wonder why they did not persevere with it. The performance section ends with a lengthy version of Berry’s No Particular Place To Go.

The final four efforts have Fraternity backing Vince Lovegrove re-cutting a couple of songs from their two albums, a funky and spirited Livestock and Getting Off (retitled by Vince as Get Myself Out Of This Place), which gets a snappy country/folk treatment. There are also covers of Arthur Crudup’s That’s Alright Mama and Rented Room Blues, written by Craig Roberts, who was another musician on the Adelaide scene.

Though Seasons Of Change will obviously be of interest to people who are fans of Bon Scott’s triumphs as part of AC/DC, Fraternity did have a fairly successful career in their own right and deserve to be known as more than just a footnote on his C.V. This set includes an in depth sleeve note which provides a full band history and nice mini-reproductions of the gatefold sleeves of the band’s two albums. A nicely realised boxset that gives a thorough, neat insight into a hard working, blues rock dynamo – Fraternity in full flight are still a joyful sound to hear.