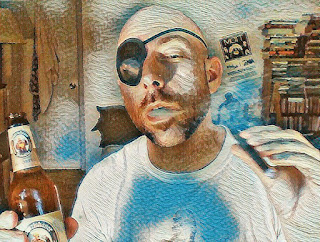 He’s back! One year after releasing the brilliant and highly ambitious album Street Penetration, Frankie Delmane has turned out another terrific long player in a similar glam/proto-punk/sleazy street rock mold. Field Recordings For The Dispossessed is Delmane’s “pandemic album”. All songs were written and recorded during the 2020 lockdown. As was the case with Street Penetration, Field Recordings For The Dispossessed crosses various genres of rock and roll but is especially recommended if you like Lou Reed, the Velvet Underground, Iggy Pop, and 1970s Rolling Stones. Fans of Delmane’s songwriting in The Crazy Squeeze and Teenage Frames will find no lack of rocking tunes with memorable hooks. But working at home with complete control over his musical vision has really allowed Delmane to establish a singular identity as a solo artist.

I closed my review of Street Penetration with the wish that more Frankie Delmane solo albums would be forthcoming. And Field Recordings For The Dispossessed is every bit the follow-up I was hoping for. Like many of the recent and forthcoming pandemic releases in our world, this album takes you into one person’s 2020 headspace. And try as we may to put the very existence of last year behind us, there is clearly great value in what our collective experience may have compelled some of us to produce. It will likely be a while before we are graced with the great pandemic novels and great pandemic films. But the viability of home recording has already brought us numerous pandemic albums with many more to come. Field Recordings For The Dispossessed is certainly one of the most compelling entrants so far. It’s not necessarily about the pandemic, yet it’s most definitely caked in the grime of that trying spring/summer of 2020. Some of the song titles (“Everybody Thinks Nobody Lived Before”, “It’s Gotta Be Lonely Being the Only One That’s Right”, “Why Is Everybody Such A Mess”) are works of art in and of themselves. These are raw, dirty recordings that nonetheless ooze a swagger that is largely absent from modern-day indie rock music. Opening cut “They’re Just Gonna Tell You What They Want” is all the best of glam, proto-punk, and the Stones melded together in glorious low fidelity. “I’m Getting Evil” sounds like ’70s Lou Reed recording a pop song with 21st Century home recording equipment. “Human Scum” is just great trashy rock and roll with a nasty edge. The gloomily beautiful “Which Lies Are Your Truth?” could almost pass for The Cure on a budget. “She’s Another Woman Tonight” sounds like a stripped-down version of a song Delmane might have written for one of his bands. Across 15 tracks here, Delmane builds on his usual array of influences as he touches on everything from new wave pop to ’60s psychedelia to ’80s synth-pop to O.G. minimalist rock and roll. It all makes for a varied yet cohesive set of songs that practically transports you to the streets of West Hollywood.

Frankie Delmane is a name known to you if you’ve been following the power pop/punk/rock and roll scene over the last 25 years. Yet beyond his flair for crafting some of the best three-minute pop songs you’ll ever hear, he’s a true renaissance man. He’s an extraordinary writer, an insightful critic, and a keen student of pop culture and all genres of music. And to this list we can add exceptional solo artist. Field Recordings For The Dispossessed, like Street Penetration before it, is a creation befitting a superlegend.