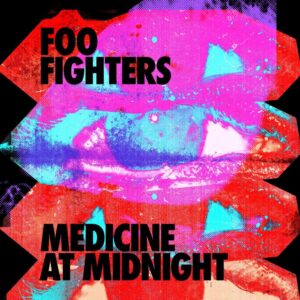 Dave Grohl and co. return for album number 10, a mix of their communal rock anthems blended with a more upbeat poppier edge.

News of a new Foo Fighters’ album will usually bring two opposing reactions. Those that herald the return of their stadium-rock heroes with cries of “This is exactly what 2021 needs!” jut up against those decrying the return of “dinosaurs”, music snobbery that will inevitably snub noses at seeing Dave Grohl’s permagrin once again gracing the covers of magazines the world over. The fact is that over the last 25 years or so, Foo Fighters have grown from that ball of energy crunching debut shot-in-the-dark to the global communal phenomenon that they are today, producing music that brings together multitudes the world over. So how does that fit into 2021 when they cannot shine in their natural habitat? Despite having been recorded prior to the pandemic, the result is an album that strips back some of their usual compressed and pushed to the limit rock to inject a dose of pop, with pulsating drum beats, disco-gospel harmonies, and rhythms that find the space to groove more than roll.

The different tack is clear from the off on Making A Fire, a funkier Lenny Kravitz style guitar underpinning the track as the gospel-style harmonies come right in. A simple vocal hook rising up and brought back in as the chorus to follow the usual minor-chord bridges. It returns in the acapella break before the band groove in once again. The song oozes positivity and it’s just that which is the double-edged sword that the band wield, confirmation bias reinforced for both their acolytes and apostates. But then again, they were and are never a band whose aim is to convince the haters, only to bring together those that want.

It feels immediately jarring then that, after such rush, they drop straight into lead single Shame Shame. It shuffles, head down, feeling somewhat out of place with what it both follows and precedes. Great then that Cloudspotter swiftly lifts things back up, again riding a funkier disco groove through the verses before the choruses crash in and the song really flies. The title track manages to bridge their newfound Studio 54 infatuation with the softer side of some of their recent output, deftly evading the pitfall of Shame Shame. Chasing Birds bridges McCartney’s saccharine balladry with a touch even of the Bee Gees perhaps at their most wistful and manages to drop off the pace without blemishing the positivity and hope.

No Son Of Mine harks back to some of the band’s best moments, a rollicking and banging anti-war song that injects the rock squarely back in the record, double dose. Holding The Poison also continues to show that they still have their rock chops and doesn’t sound too far from what they were doing on There’s Nothing Left To Lose. Waiting On A War is built for the mass singalongs that the band, and all their fans, will be yearning for. It slowly builds up from a single acoustic guitar, subtle strings winding beneath before hitting stride and ramping up for the final quarter as the Foos do so well.

While Medicine At Midnight may not hold so many bright golden moments as their best work, it’s great to hear that the good times are still rolling with them, and, despite the odd misstep, there is still room for them to rock out with wild and wailing guitars from time to time. After 25 years and 10 albums, it’s also good to see that they still have a trick or two up their sleeves.