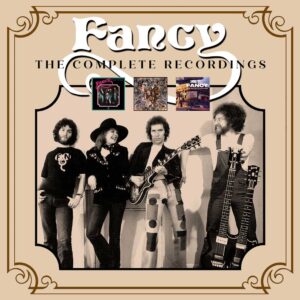 The complete recorded works of female fronted glam/hard rockers Fancy, including their cover of The Troggs’ Wild Thing, which reached the top 20 of the American charts in 1974. This set has their two albums plus bonus tracks and a live section recorded at the famous Ronnie Scott’s in London. LTW’s Ian Canty sees if a little of what you fancy does you good…

Like many musicians who rode the glam wave in the early 1970s, Fancy had roots that ran far back into the previous decade. Guitarist Ray Fenwick had been in Joe Meek’s beat sensations The Syndicats and also later joined The Spencer Davis Group after the Winwood brothers had exited in 1967. Bassist Mo Foster had been a member of prog act Affinity and was a long-term sessioner, as was Welsh drummer Henry Spinetti (the brother of actor Victor). Library music magician Alan Hawkshaw was called in to add keys and Mike Hurst, the producer the band were a brainchild of, pitched in on backing vocals. Hurst brought Fancy together in order to cover Chip Taylor’s Wild Thing, which was of course best known by The Troggs’ 60s hit version, for the UK’s burgeoning glam market.

He reasoned that Fancy should make the song sexier and to this end recruited Helen Caunt as the band’s lead singer. Though Caunt’s vocal limitations soon became apparent, she was eventually coached through Wild Thing and recording of the record was completed. Soon a deal with Atlantic Records was agreed and Wild Thing was released as their debut single in the spring of 1974 with the self-titled Fancy, which has some good guitar moves over a barely audible vocal, as the flipside.

The suggestive nature of the performance hampered UK radio play, but the record took off in America, where it was issued on Atlantic’s Big Tree imprint. In Australia it made the charts as well, but it was the success on the Top 20 of the Billboard chart in the summer that meant soon the US end of Atlantic/Big Tree was asking for a follow up in the form of both an album and single.

At this point Caunt was eased out and, after a long series of auditions, Anne Kavanagh was recruited as a replacement. Les Binks also came in for Spinetti on drums as Fancy looked to become a more serious proposition on the back of the single’s favourable reception in America.

The first Fancy album commenced with the throbbing original single version of Wild Thing, but Kavanagh’s superior vocal attributes are soon brought into play on the tough, guitar crunch of Love For Sale. The LP is firmly based around Fenwick and Hurst’s compositions, apart from the the Leiber and Stoller song I’m A Woman and blues oldie One Night, which was recorded by Elvis Presley in the 1950s.

The four Fancy members here are augmented by a brass section and producer Mike Hurst again gets in on the act too. He was really the fifth Fancy member and contributes vocals as well as writing the songs. A good balance is struck between pure glam hammer and hard rock chops on the LP. Having said that, inevitably their r&b roots show on a lot of what they do here, particularly on their version of I’m A Woman which gives Kavanagh abundant scope to really grandstand. But there is more than enough no-nonsense, unpretentious fun to see us through the album’s 10 tracks.

There are one or two more pedestrian moments (Move On plods a bit), but overall Wild Thing the album has a good deal of energy, a rough and ready sense of purpose and a real joy de vivre in Anne’s singing talents. It came wrapped in a classic “down and dirty” glam rock picture sleeve too. Second single Touch Me also reached the higher echelons of Billboard and is a cool rocker and seductive turns from Kavanagh on I Don’t Need Your Love and U.S. Surprise both hit the sweet spot. This disc includes three bonus offerings. Firstly we have Wild Thing’s b-side Fancy, which is a nicely rhythmic glam stomp and then Bluebird, a sedate guitar instrumental in the mode of Fleetwood Mac’s Albatross. Finally we have Ray Fenwick’s brief guitar Sidewinder, a new recording.

By the time of the second Fancy long player, Something To Remember (issued under the title Turns You On in the US), the band had gone a long way from their “chancers thrown together in order to produce a quickie single” beginnings. They had moved from Atlantic, who had little interest in Fancy apart from as a novelty act and signed to Arista in Britain and RCA Victor in America. Their new sound here was far more slinky funk/hard rock, with horns and string arrangements not blunting their energy a jot. A very danceable brew and Kavanagh’s voice excelled in the lengthy funk workouts. Also, an American tour in support of their two hits stateside had lead to the band locking together even more firmly.

Weighing in with only seven selections, Something To Remember even tweaked the new Fancy formula a little towards disco on the title track. The final single released by the band, She’s Riding The Rock Machine, is a wonderfully cynical look at the music industry and very accomplished. A full-on driving funk monster that goes for nearly three minutes before the vocal even comes in, this is possibly my favourite tune of the whole set. The remainder of this platter presents Fancy as a band of imagination and variety, for example the jazz ballad style evoked on Everybody’s Cryin’ Mercy and a fast dance thrust in The Tour Song, a real honey of a tune.

Even so the album didn’t connect with the public on either side of the Atlantic, which more or less spelt the end for Fancy. As bonus tracks on this disc we get the single and instrumental versions of She’s Riding The Rock Machine, a short version of I Was Made To Love Him and funky b-side Music Maker, one of a couple of times over this set where male vocals take centre stage. This track isn’t bad, but on the whole I prefer Fancy when Anne is singing lead. This section of the set concludes with Driving Home, a country recording from Mo Foster. It’s okay but sits a little incongruously alongside the album or singles, having little sonically in common with them.

The final disc of this set documents the band’s last ever gig at Ronnie Scott’s club in London, for a performance which showcases Fancy’s second album. The sound quality is pretty good and the band is tight and feisty too. The sole glance back to their first LP, Love For Sale, is elongated by that old 70’s live standby, the drum solo and Everybody’s Cryin’ Mercy has some Peter Frampton-style talk box action courtesy of ancillary member Jo Partridge. But elsewhere there’s precious little wastage, with short and sharp versions of The Tour Song and She’s Riding The Rock Machine, plus a rollicking I Was Made To Love Him. They clearly put on a good showing in concert, which makes the fact it was their final one difficult to process.

We finish things up here with a 10 minute interview with the US radio station WLYX in Memphis, from December 1974. This touches on their experiences on the American tour which included Ray toppling into the orchestra pit at a gig at Chicago and Mo falling off stage at LA’s famed Whisky A Go Go. They also marvelled at Earl Scruggs very laid-back performing style and enjoyed the general good reception at the gigs. It’s a nice, relaxed snapshot of the band to end with, they were clearly enjoying their time in the US greatly.

Though Fancy began as a strictly studio project for the aim of recording Wild Thing, it quite unexpectedly developed into something with a life of its own through quite unexpected success. They gradually mutated into a more serious and talented outfit with a hard rock basis and firm funk leanings, before coming to a sudden halt after the Something To Remember LP in 1975. This set shows they had worth beyond being a two hit wonder and if that second album didn’t score with record buyers at the time, it sounded pretty darn good to me in 2020. A bright and listenable collection which ties up everything by a band that was a bit of a enigma, but showed constant development throughout their existence.