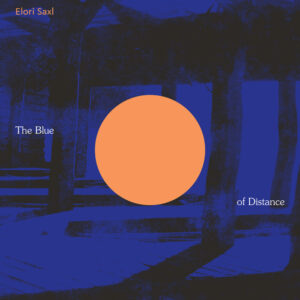 The Blue Of Distance

In most music listeners’ minds, the term “ambient” conjures a cornucopia of different ideas – anything from synth soundscapes to neo-classical instrumentals and musique concrète. Not to mention nose flutes, chimes, birdsong and the mating sounds of whales.

The young New Yorker Elori Saxl’s The Blue of Distance combines most of the former and – thankfully – none of the latter, blending digitally-processed recordings of wind and water with analog synthesizers and chamber orchestra. The effect is stunning, with elements of Steve Reich, Philip Glass, Brian Eno and much more besides.

It begins as a meditation on the effect of technology on our relationship with land/nature/place before evolving to become a reflection on longing and memory. The phrase “The Blue of Distance” was coined by Rebecca Solnit in A Field Guide to Getting Lost and refers to the phenomenon of faraway mountains appearing blue due to light particles getting lost over distance.

Half of the album was written in the Adirondack mountains during summer, the other half conceived on a frozen Lake Superior island in deep winter. The result, says Saxl, is intended as a subtextual dialogue between the two extreme settings. The remote community of La Pointe (pop: 261) on the island of Madeline Island (pop: 261) where Saxl spent the winter, is also the setting for two self-directed videos – Wave I and Wave III – embracing the calm and serenity of the setting.

Musically, Saxl’s intention was to combine the technology of electronic music with the rhythms of nature. She had been listening to a great deal of EDM prior to starting work on her album, and was struck by the use of modular synths to create pulsing beats. “I’d been spending a lot of time sitting outside listening to the wind and water, which I noticed were also pulsing,” she explains. “It hit me that maybe there was a way to use those sounds as a sound source to create beats. So basically trying to figure out how to shape wind and water into a pulsing beat that emulated a modular synth (or rather, pull out the pulses inherent in those sounds) was what led to the musical foundation of The Blue of Distance.

“Then I just tried to think about what acoustic instruments the electronics sounded like and just write parts that mimicked the electronics so that there was a blurring and confusion of sounds. The water and wind samples’ pitch bends and sways, mimicking a synthesizer and confusing the distinction between natural and artificial (or digital) sounds.”

Saxl, 30, makes music and film and has composed for new music ensembles and directed films for the New Yorker and Slate, earning her two Emmy nominations. She says of the album’s genesis: “Being born in 1990, I was interested specifically in exploring what it means to have grown up contemporaneously with the proliferation of the internet and new technology such as Google Maps, Youtube, and smartphones filled with photos and videos that allow us to access distant people and places without being physically present.

“I was interested in understanding how the personal experience of memory formation may parallel humanity’s changing relationship with land through new technology that allows us access to a place or person without being physically present. When I began working on the album, I was really focused on that abstract conceptual idea.”

Minneapolis-boprn Saxl, who now lives in New York City, wrote the first half of the album in the middle of summer amid the lakes, rivers, and moss-laden forest floors of the Adirondacks –  “one of the happiest times that I’ve experienced in my life” – using flowing water and wind as a sample source.

She returned to the album later that winter while living on an island in the middle of a very frozen Lake Superior, intending to collect more samples from her new surroundings, only to find the water beneath a foot of ice. “Emotionally, I was in a pretty low place, but I wanted the piece to feel cohesive, so I started looking back at photos and videos from my summer to try to remember what I’d felt like so that I could infuse the new music with that same emotion.”

All words by Tim Cooper. You can find more of Tim’s writing on Louder Than War at his author’s archive. He is also on Twitter as @TimCooperES.

The post Elori Saxl: The Blue Of Distance – album review appeared first on Louder Than War.