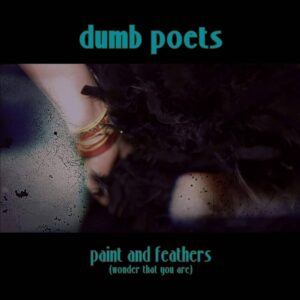 Dumb Poets – Paint & Feathers (Wonder That You Are)

This is just a pure and simple pleasure.  Laid-back and chilled-out. Poetic and melodic.  It reminds me of Peter Perrett and the Only Ones at their most languid.  Romance and regret, that clean, beautiful guitar-sound…

Dumb Poets debut album All The Ghosts came out in Oct 2018 – LTW reviewed it here. Since then the band lost two members and found replacements but retain their distinctive sound. Singer Lance Riley (formerly of the Spoons) and drummer the legend that is Joe Musker (Dead or Alive / Wah Heat) are joined by Mark Arnold on guitar and Paul Arnold on bass.

Their mature, walking pace rock’n’roll has an idiosyncratic charm, breezy optimism and romantic melancholy that captivates.  Gentle rock guitar, hints of country, a Byrds, REM, Kinks kind of melodic classicism. The very best of British Americana – tradition and tunes, songs of joy and love, crafted and performed well with a lot of bohemian style.

I asked lyricist Lance about the song.

Originally I was thinking of my son Milo when he was a small boy. Waking up in his dressing up gear and the beauty of innocence.

The song took a slightly different path with all the uncertainty and mental pressures of the times we are living in. A reminder that when we can’t see the wood for the trees there is still that little spark we all have. A song of solidarity for all us children to feel the wonder of those we love.

The recording sessions had a calm energy and serendipity. It was like we all knew where we were going without anyone needing to mention the destination.

It’s a classy song and would go down well with the cooler BBC Radio 2 Listeners perhaps more than 6-Music.  At a midway point between the Only Ones and REM there should be a lot of people who want to hear this kind of melodic melancholy which is just too cool and soulful to be dismissed as MOR.

Dumb Poets are classicists, playing music for grown-ups who still have a belief in the power of melody & language to mend broken hearts and ease bruised souls..

A new album is in the pipeline but you can still hear the calm energy of Dumb Poets  All the Ghosts on Spotify and YouTube or buy the album from the band website.