Vacant Stares have been working very carefully to put together an 11-song album spanning their half-decade existence. The result is the eerie, intriguing single, Dreamlessly, artfully realized in Neu Caligula’s video.

“It will likely be the only document we leave behind, so it must sound and feel like the time and effort that went into it, says Vacant Stares. “Maybe some people will dance when they hear it, that alone could justify the effort. We are overworked and poor, and try as we might, inspiration can’t be wrung from fatigue and worry alone. Art won’t save us, but it can sustain us in a way. When our bodies are but sediment in the geostrata, perhaps the only evidence that we ever were will be the scattered platters of petroleum-based, non-biodegradable plastic with all these songs etched into their faces. That would be wonderful.”

This particular video brings to mind the haunting vision of Twin Peaks’ Laura Palmer, or the kissing figures of Magritte, as a cloaked body writhes around in the woods and next to a body of water. It moves as one would in bed during a fitful dream, feet and hands poking out from the red fabric. It’s mysterious and ethereal, much like the mood of the track itself.

Vacant Stares started in Portland, creating coldwave, post-punk, and dream pop sounds throughout their career. “From the outset, we sought to pair a distinct visual aesthetic to our sound, something vivid, ecstatic, and hypnagogic,” says the band. Neu Caligula’s trademark visual textures and kinetic editing fit the bill.

“2020 has been awfully hard on us. When this blows over, it’d be nice if the gathering of all of us into a sweaty, deafening space to see and feel the thrumming of passionately played songs will mean more than it did before. Here’s a song to tide us over.”

“Dreamlessly” is out now. 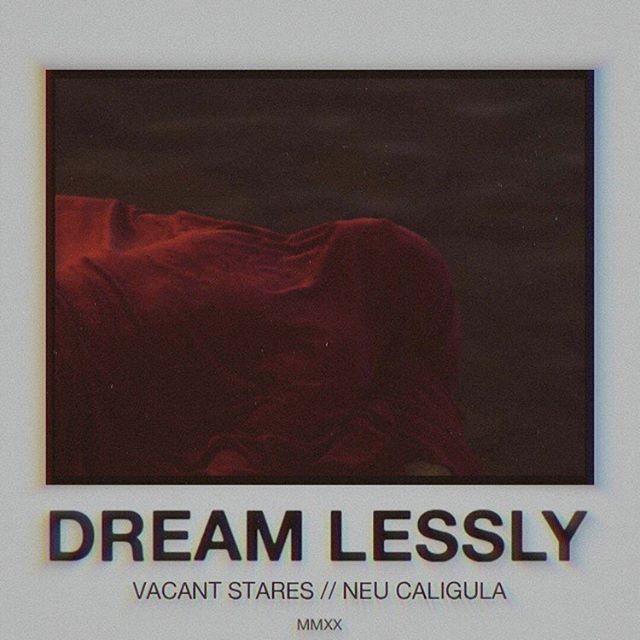 The Mission | God’s Own Medicine