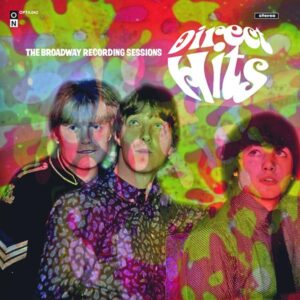 Unreleased 1982 recording session by Battersea-based mod/psych outfit The Direct Hits, unearthed by the Optic Nerve label. 12 songs make up this set, some of which were re-recorded for the band’s debut album Blow Up! that came out in 1984 on TV Personalities leader Dan Treacy’s Whamm! label. Ian Canty spends a night living it up on Broadway.

The Direct Hits were a trio from South London that were comprised of drummer Brian Grover, bassist/vocalist Colin Swan and Geno Buckmaster on guitar and vocals. The latter two had been in new wave/power pop band The Exits, who got as far as issuing a single on Lightning Records called The Fashion Plague/Cheam in 1978 (the disc is apparently now quite a rarity).

In 1980 The Exits folded and Swan and Buckmaster formed this next venture with a couple of percussionists who didn’t last long on the DH drum stool, until Grover got the job long term in 1981. The Direct Hits toted a pronounced and updated 1960s mod pop approach, but they arrived too late for the media scrum of the mod revival of 1979, which in hindsight proved to be not a bad thing. They did however take part in London’s “new psychedelia” scene of 1981, which centred around clubs like The Groovy Cellar and The Regal clothes shop.

With much more to offer than the average Jam copyists, The Direct Hits’ sound was geared more towards the modernist crossover with psychedelia that occurred in 1966. It was structured around a raft of strong original songs, plus their already well-honed singing and playing talents. They played their first gig near the end of 1980 and built up a following gradually on the back of some fine live showings. This helped bring them to the attention of The TV Personalities’ Dan Treacy, who got the band in the studio to record the Modesty Blaise single for his Whamm! record label. This session was undertaken just before Brian Grover’s arrival in December 1981, with Ian “Griff” Griffiths drumming on the disc. It was a whole eight months before the record was finally released. Despite the long gestation period, the 7 inch was very well-received by the music press and the band marked out as one to watch.

Just as the single was issued, The Direct Hits turned up at the Broadway Studio in Tooting, South London, to record their debut album. Whamm! didn’t have the financial clout at the time to fund recording an LP, so the band put what money they could together for this recording date. They set down nine songs, with their live prowess making the session a breeze, apart from a fraught end to the day which left the collection a trio of songs short. A fortnight later, they returned to record those final three tunes, but the album was then abandoned. Nearly two years on in 1984, the band released their first long player, Blow Up!. This set featured re-recordings of the material cut at Broadway (though I Start Counting didn’t appear until 1986’s House Of Secrets), but these particular cuts have not seen the light of day until now.

Starting up The Broadway Recordings we have Ride My Bicycle, which eventually appeared on the Speed Over Berlin EP. It is immediately apparent from the rock-solid riffing, scorching feedback attack and fresh and addictive nature of this number that The Direct Hits shared much more in common with The Prisoners than The Merton Parkas. They are full of restrained power, having a canny ability to apply a delicate touch in the verses, whilst really taking off with the melody.

I Start Counting is a little gentler, but the song’s jangly mod pop and hugely satisfying hook-line is a joy to behold. Following this we have Too Shy, a cool lyrical pen picture enhanced by rolling chords and some good harmonies. The guitar nicely cuts lose again in the break and with the piano attractively plonking away in the background, the total effect is akin to The Small Faces’ mid-60s glory, a swell spot to be. Leander, By The River again proves The Direct Hits to be streets ahead of the average psych revival act – their playing is always nimble and powerful with plenty of zip and guts, plus a buoyant rhythm section that just does not let up.

Miranda Berkley, which starts a run of four songs that were re-recorded for the Blow Up! album, is a tender work which builds up marvellously. The sound falters momentarily, but it doesn’t really mar what is a snappy short number. The more explosive and psychedelic This Was Marc Deans comes next, the real kick that was always there in the engine room of The Direct Hits shows up well here again. A rap of the drums sets off Naughty Little Boy – you can see some common ground that the band shared with The TVPs most clearly here. Dan Treacy’s mob early on specialised in recreations of the kind of late 1960s character studies perfected by the likes of Ray Davies. It is a sound that isn’t a huge distance from what The DHs achieve here.

The excellent What Killed Aleister Crowley? might arguably be The Direct Hits’ best known effort. A steady rhythm and hypnotic guitar line helps tease out all the elements of what to my ears is a totally alluring classic of post-1960s psych. I’d Rather Stay Than Go comes next in more straightforward and earnest 1960s pop fashion, but is not the lesser for it. In fact this is a real charmer.

Sunny Honey Girl was the title track of a soundtrack album by the band. It was for a film that was due to star The Direct Hits, but subsequently wasn’t completed bar a couple of now lost reels with band performances of Modesty Blaise and What Killed Aleister Crowley?. The bass buzzes a bit on this one, but it is an arresting enough tune. You can hear a bit of a sonic difference between the two sessions straight away, though the sound never less than listenable. There’s some good guitar and percussion that helps to make Sunny Honey Girl stand out as lively and fun. A sweeping I Feel The Earth Move again finds the band back in a more psychedelic mode. What is more important is that they never lose their pop appeal in pursuit of matters trippy. The vocal harmonies hang together well here, something which the band appear very accomplished with on this collection. Start Living ends proceedings with the kind of easy groove The DHs made their own – very evocative and bright as a button.

The Direct Hits were one of those bands who, despite their many excellent qualities, were mysteriously shunned by radio, TV and the record buying public. The Broadway Recordings Sessions may be raw, but catches them at their early peak, full of an energy and imagination that few others could aspire to. A gem of a band and a lovely way to spend 40 or so minutes, if you’ve at all a yen for quality pop music that is crunchy, catchy and strangely beautiful.

All words by Ian Canty – see his author profile here.