Skip to content
Florida death metal veterans DEICIDE have launched Devil’s Dick, their own brand of hot sauce, featuring the tag line “it burns when you put it in your mouth.” The habanero hot sauce comes in five-ounce bottles and can be purchased as part of a bundle that includes a t-shirt and a sticker.

Asked in a 2018 interview with Tampa Bay Times if he is still personally driven to write about Satanism and Christianity, DEICIDE frontman Glen Benton said: “Honestly, I have tried to write about other things. I really have, man. And you know what? I actually have one song on the new album where I got there. I was like, ‘Hey you guys, you want to read through these lyrics, and then read the other ones?’ And they were like, ‘Oh, wow, let’s go with the other one’ — the original song that I had written, which is ‘One With Satan’. I had given myself writer’s block trying to go back and forth between the two. I just can’t. If I fight it and try to push it in a certain direction other than where it wants to go, I just get writer’s block.”

Pressed about whether he still identifies as Satanist, Glen said: “No. I’ve always said this: They identify me as a Satanist. I identify myself as a free thinker and a kid that was tormented just like everybody else growing up. My mother did a stint as a Sunday school teacher. My father was so-called Catholic; I don’t know what he was. And my mother was Lutheran. My grandma was into the whole Latin thing — when she went to church, you couldn’t understand it. There was no English spoken. I was a little kid. That knd of stuff creeped the shit out of me. I had a lot of terrifying moments as a child with that shit. Growing up, people would call me an evil bastard. They referred to me as Damien from ‘The Omen’.

“It’s really odd, whenever I go places. I played Chile a couple of times, and a couple of days after playing there, there was always an earthquake. When we played South America this last tour, we were trying to get out of there, and we had a hurricane coming down on us from one direction, and as soon as we got out of there, they have a huge earthquake.

“It’s weird seeing things like that shooting in Clearwater, that Stand Your Ground shooting. Dude, that store is directly across the street from the old Deicide house that my grandmother used to own. Directly across the street from the store, next to Coles Gun Shop. That’s where DEICIDE started, was at that house. We used to rehearse in that garage. Here’s the weird thing: The day before that shooting, I took my girl down there. I said, ‘Let me show you where the old house is.’ I was actually parked right there by that parking spot where the shooting happened, the day before it happened.

“Every time I go anywhere, something really stupid happens. I used to call it the DEICIDE black cloud, but now I’m starting to think there might be something to it. That’s kind of been my life.”

In 2019, DEICIDE parted ways with guitarist Mark English and replaced him with Chris Cannella.

DEICIDE‘s latest album, “Overtures Of Blasphemy”, was released in September 2018 via Century Media. 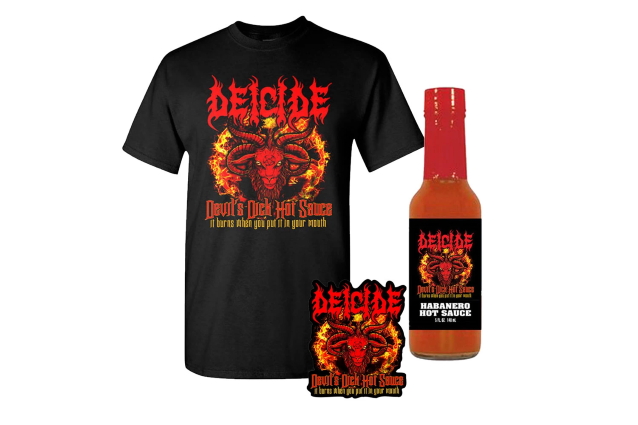