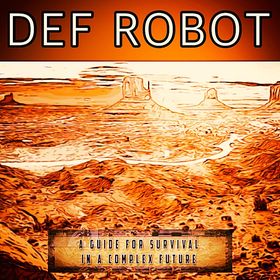 A Guide For Survival In A Complex Future

The highly prolific Kendal / Berlin Mancunian duo have been lazy bastards recently, not releasing an album for 6 months. Def Robot return with a futuristic dystopian cracker that harks back to that Depeche Mode sound in their own vein. Wayne AF Carey tries to crack the code of album number 10 with the help of the Mark E Smith of the Covid era, the outspoken wise Paul Taylor…

If you don’t know by now I fuckin’ love this band. LTW’s Nigel Carr has warmed to them, LTW master writers Ged Babey and Neil Hodge are on board. They have a year old back catalogue to die for. You can dip in and out of it and find that many styles of music it’s insane. They plunder from every genre going yet do it with style and make it their own. Paul Taylor is now a voice on his own with Def Robot and Mr Hancox just takes the piss with how good he is on guitar. Apparently Paul has got a band together all ready to tour this mass collection of top tunes accumulated over a year. Yes. A fuckin’ year. If it weren’t for the fact that 95% of these tunes are ace I wouldn’t bother. I’ve been there with record labels and PR in the past and just can’t fathom why they’ve not been signed yet. Are you listening out there?? Paul explains the album track by track and I deliver my As Fuck verdict.

“When fascism rises, you’ve gotta say no. Simple as. The only thing stopping out and out revolution against the upper class twats right now, is the pandemic. Society should be a level playing field in this day and age.”

What an opening track. Futuristic fun, magic background guitar effects and drum machined up to fuck. Like a jolly Nine Inch Nails with loads of ‘nah nah nahs’ Brilliant.

“Written and recorded as the American election came to its conclusion. The great thing about making music off the cuff, is how up to date you can be about current affairs. Lines about Florida numb nuts feeding the alligators and politicians not caring about the truth. Set to a Clash inspired soundtrack.”

A dark bassline kicks in matched by Paul’s weird as fuck vocals diving in to a proper funked up track that gives you a dash of The Clash and PIL going all dub on your arse. The DR brothers are upping their game. A real dig at the Trump era.

“Let’s face it, life is weird. Last thing we need is for shit to get weirder! We all need to be that bit more friendly and compassionate towards our fellow humans and animals.

A proper laid back tune here with some amazing guitar moves from Hancox. A nod to insomnia on this which has affected them both. Some great organ sounds going on with a nice class bit of Floydian stuff.

Sick Of The Hunt

“Ever get sick of being beaten on and pushed to the limit of your existence, by arrogant rich bastards that wouldn’t know hardship if it came and shat on their head? Time to stop, turn round and nut that Gove twat in the throat.”

A lovely Manc twinged intro kicks this off then it goes all Pixies. It’s the bass and lovely guitar chugs that drag you in. “One rule for them, another for the rest” Says it all really. An album highlight.

“If you could warn future generations about the dangers of political and environmental shenanigans, what would you say? I’d certainly advise against time travel to 2020, for fear of going into an apoplectic rage and making your head explode.”

“Bretwalda is an ancient word akin to overlords and kings. About time that shit was done away with, yet we still have cunts born into power”

The highlight of the album to me. Pink Floyd overtones mixed with grunge. A proper crashing guitar riff that gives a Killing Joke feel yet a proper Def Robot flavour. This will be a staple in their live sets when we return to the new normal. Amazing drums to boot. Where the fuck do these tunes come from??

“It has been said that golf is a good walk spoiled and I concur. Bound to see some utter twat like Trump on a golf course. Don’t mind the game in principle, but as usual, rich fucks have taken over. A song harking back to David’s teenage punk years, with the song written by his then band ‘Tim’ and sung by David’s ‘ol mucker Dan Graham.”

“Do you feel like you’re in a bad dream, waiting to wake up? Yeah, so do we… Was the start of a concept album that became ‘A Guide…’

Another dark number which features violins and is a trip hop dubstep masterpiece. Think Portishead on a bad trip hanging out with Burial and Aphex Twin before kicking in to a magic Muse like riffage stomper. Highlight number two.

The Devil Rides Out

“The devil may be defeated for now, but beware as he will return in another guise. We also still have the dribbling village idiot Boris wielding his dubious power.”

Tarantino inspired music going on here with the funk flowing due to the excellent drums and shimmering guitars. Another rabble rousing track that keeps you interested in the myriad world of Def Robot.

“Inspired stylistically by The Fall, a tale of small town madness, homogenising your existence.”

“Again with the current affairs. We’re like Newsnight without the pay offs. Joe may not be great, but anything is better than a pile of shit.”

A bit of a surf rockabilly sound here slowed right down. They certainly know their shit here. Wouldn’t sound out of place on a Cabbage album. Short but sweet.

“How Do I Know If I’m In Hell from the 9th album, revisited and reworked as a Dub remix after a suggestion by Ged Babey”

Highlight number four is a dubbed up version of the brilliant spoken word track from album 9. Dark and foreboding. Our main man Ged gives wise advice and Paul has melded this track into a brooding slab of stoned out echoing dub. An excellent end to an ambitious album.

Taylor and Hancox cannot stop churning out the tunes. They’re like a leaking tap that is ready to burst. When it bursts the people might cotton on to their magic. Here’s hoping. The creativity is shocking. Bring on album eleven!

The post Def Robot: A Guide For Survival In A Complex Future – album review appeared first on Louder Than War.