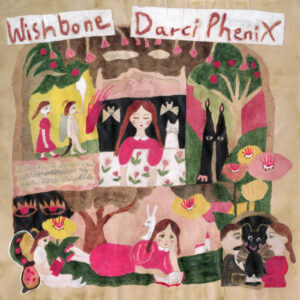 After a clutch of glowing reviews for recent single Hospitality helped to edge Darci Phenix into the music world’s consciousness, her debut album Wishbone, out on Team Love records on January 8th, goes a further way to prove she’s not just got possibly the best name in music right now, but that her charm and talent make her very much an artist that should be even more widely discovered in 2021.

If one shouldn’t judge a book on its cover, then perhaps the same can’t always be said of album sleeves, given that our introduction to the record is Kosuke Ajiro’s beautifully whimsical artwork. A fairytale illustration-style of walks through a fantasy-tinged adolescent, it sets the scene for Phenix’s world beautifully.

Opener Arkansas sets things out perfectly, Phenix introducing us by telling us about the “little ballerina in her music box mind”, the kind of imagery that is easily evoked by the delicate melodies and Phenix’s incredibly natural vocal. The knack that she has, though, is never allowing charm to lapse into sentimentality, with a sense of realism and nuanced human nature helping bringing an edge. The recent single Hospitality is a perfect slice of indie-pop, lyrics on prescriptions and self-destruction flowing with ease against the sense of security her melodies build. Black rivers, children in snow, dissolving flowers – Phenix’s world takes wonder and beauty from nature and takes it peppers it with dark twists. Alongside this sits plenty of self-reflection of the most human kind, with observations on how “fucked up people make fucked up friends,” and how “can you learn from your mistakes if you’re ashamed to look at them?”

But its warm charm always wins the day. The likes of Bruised Knees captures all the joy of childhood playtimes and Flying Kites switches the tone from indie-pop to sublime folk with a optimistic tone and playful imagery ensuring they hold power over the hints of violence and self-doubt. Because this is what much of this album summons. Darci Phenix is unafraid to address things with relatable honesty, but the whole picture pulls together to create something comforting and beautiful. It’s a world which has been sweetened, but with honey, not saccharine. Her beautiful vocals have much to do with this – her voice is so gorgeously natural, she could sing a takeaway menu and sound like choir of wood nymphs. But the construction of her delicate, melodic songwriting is of course the backbone of this, and it amounts to an impressive debut album. The folksy minimalism of closer No Matter What rounds everything off like a kiss goodnight, a love song that also feels like a tribute to imperfection in lullaby form. “I’ll be here for you,” she sings softly as the album draws to a close. With such a gorgeous, cohesive and evocative petal-scattered debut, you can’t help but feel grateful for that.

All words by Amy Britton. Find more on her archive