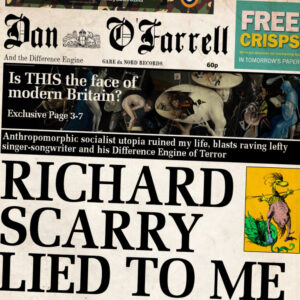 Dan O’Farrell & The Difference Engine  – Richard Scarry Lied To Me

Still a cult nationally when Dan O’Farrell is one of England’s most astute and brilliant songwriters – this is the latest and greatest work by his band.  Well-produced, faultless and sublime. The Difference Engines ‘Out Of Time’ maybe… Ged Babey gives an exclusive insight into Dan the Man..

I shouldn’t still have to be his John the Baptist – when will the world (or the BBC) discover Dan and his band?

I remember once I was travelling in the front passenger seat of a car being driven by Dan O’Farrell. It was a nice sunny summers day and he was going to play at a 50th Birthday do. It is an easy job being his roadie for a day when he plays solo without the Difference Engine.

Heading towards the Midlands a complete twat in a white van cut-us-up really badly, literally inches away from a collision, but what I was more gobsmacked about was Dan’s reaction.

‘Oh, hello’ he said gently, as if a little robin had just unexpectedly flown down and perched on his arm and trilled a little tune at him.

Anyone else would’ve let out a string of expletives as they wound down the window and waved a fist… but that is O’Farrell.  A thoroughly mild-mannered fellow.

It kind of explains also how he can write songs that are full of anger and passion, describing the horrendous state of nation or world and mans inhumanity to man and yet still sound calm, eloquently conversational and considered. He is the most charmingly polite ‘protest singer’ you will ever hear.  An English Michael Stipe with a dash of Jonathan Richman inhabited by the spirit of Woody Guthrie.

I hinted before about his appeal too as an unlikely sex-symbol: a middle-aged, bald-man with twinkly eyes. Only because my sister and two of our old mutual female friends have such a deep admiration for his work they travel from Cornwall, Worcestershire and Wiltshire to his gigs (in Hampshire) to see him play.  If he can inspire such devotion in a few, then he could in ‘the many’ given the national exposure.

Everyone should know his name and his songs. He should be a household-name, in Guardian-reader, Radio 4, left-leaning circles.  His songs of privilege & guilt, love of life, belief in love, social justice and so on, are wry, witty, intelligent and self-aware. When he tackles life’s conundrums in his songs -he mocks himself first.

The topics on Richard Scarry… seem to be more about Englishness, vulnerability, ageing and self-doubt.  This despite his heroic effort to make a ‘more upbeat’ album -which they have partially succeeded in doing.

Dan has been writing songs for more than 30 years and he knows he is good and lack of wider success does seem to have got to him.

With musical nods to 19th Nervous Breakdown and Teardrop Explodes Reward the clues are sadly there.

Another theme on the album is the slow erosion of hope and childhood positivity, hence the title, which he explains here.

“There may be a generation gap here…but if you grew up in the 70s there is a high chance that your parents thrust a Richard Scarry book under your nose so you could find “Lowly Worm” on every page. The books are delightful – brightly coloured depictions of anthropomorphised animals working in perfectly harmonious societies. A 4 year-old me particularly loved “What Do People Do All Day”. Which seemed to promise a utopian vision of urban life. The world used to seem safer/organised and fair…But Richard Scarry lied to me/it’s broken beyond repair, the utopia hasn’t arrived yet. And Lowly Worm is dead in the bottom of a Tequila bottle”

The extended band, flautist, string section in addition to Chris and Rick -drummer and double-bass player are all top-notch musicians who seem dedicated to being part of the O’Farrell experience. He is as likeable as he is talented and inspires everyone around him. A new person in the production chair seems to have elevated this album above the previous two.

I’m also very proud of our songs; the variety of moods and the sound that we have achieved through working with Andy Lewis who has brought a confidence, a sparkle and a gifted guiding ear to proceedings”.

Slow Magic one of several album highlights. Flute and twangy guitar vie with banjo and harmonica on a song of positivity dappled with melancholy.

Extinction Man is the toughest and nearest to rock’n’roll the band have ever gotten. Yet still mixes electronics and brass/woodwind beneath O’Farrells most growly vocal before a Bono-like ho-ooo-ooowl and a wailing guitar solo. It’s far better than I’m making it sound!

As a documenter rather than an actual critic of his work for some years now I share Dan O’Farrells disappointment with the way things are including his failure to widen his audience outside of the South.

You have to be bold and brash and have a team of publicists to reach the media and BBC. You have to push and shove and be ruthless to get noticed.  Dan is too polite to cause a fuss.

I suggested he entitle his next album Bring Me The Head of Lauren Laverne and open it with a song called I Will Not Rest until Marc Riley is Hung With the Entrails of Steve Lamacq.

‘Don’t you think that’s a bit extreme?’  He said, as a little robin landed on his hand and trilled a little tune. ‘Oh hello’.

Other, more sensible reviews of the album can be found here and here

Buy the album from Bandcamp

The post Dan O’Farrell & The Difference Engine: Richard Scarry Lied To Me – album review appeared first on Louder Than War.