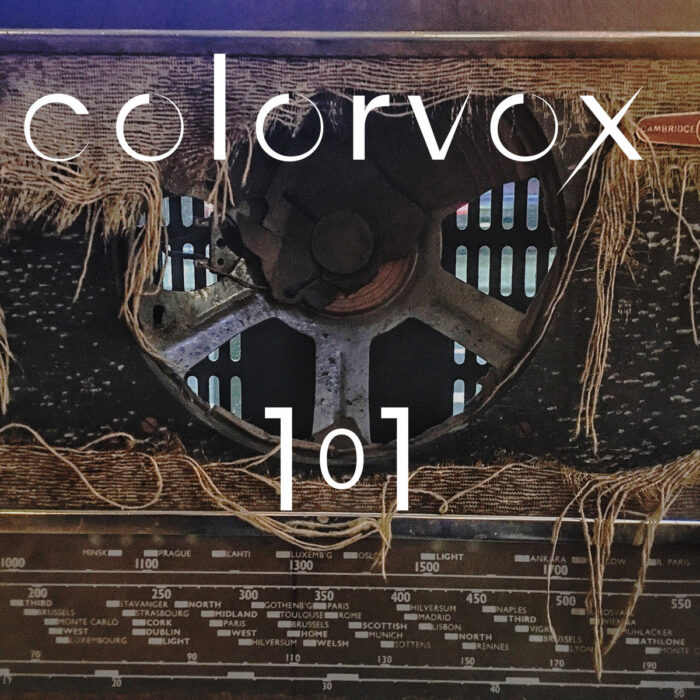 Colourvox is a project initiated by Steve Hellier, co-founder of Death in Vegas and electronic sound experimenter extraordinaire and Richard Thompson, (no, not that one) who weighs in with a vast array of guitars, electronics and field recordings. There are a number of talented guests, (Andy Visser, Hugh Wilkinson, Twm Dylan, Laurent John), too, who add considerably to the mix.

I have seen Hellier hitting the inside of shipping containers and squeezing sounds out of sonic postcards. This, more conventional expression of his – and doubtless Thompson’s – sound world is a record currently looking for a home. It’s also a record that has been a long time in gestation. But that time, spent chewing over half tones and reshuffling beats, has not been wasted. There is a great feeling of calm and patience to this record. And, despite the unavoidable dollops of Ulrich Schnauss-like “loner melancholy”, which drip quietly into the mix like honey off a spoon, an ultimately uplifting experience.

Still I’m not sure whether starting an album with a track named after a famous Belgian beer is indicative of anything outside of a need to hit the bottle. The track, ‘Leffe’, is suitably Belgian in character, full of the earthy, misty grimoire that the country emanates. Half accents of an instrument or sampled passage introduce themselves only to be withdrawn, and as such, the opener is a revolving cast of sounds and sensations, none outstaying their welcome – shuffled through their time by a steady circular beat.

There are a number of elements that shape this LP, markedly. One is the way certain key sound snippets are picked and built up into a recognisable coda and left to mess with your head. For a predominantly ambient or mood album the The mid tempo and rich key patterns (sounding like early digital registry machines) in the fantastic ‘Queen’ are given a chance to run around the yard before larger more ominous elements invade their space. The final result is not unlike that reverse collage process where layers of paint, or paper are stripped away from the surface to reveal a depth on the picture plane.

‘Queen’ is an important track as it highlights another aspect that guides this rich and dreamlike release. The track introduces to our new boon companion, a beat that isn’t quite a beat, never really on the one, the offbeat, a restless and shapeshifting soul that decides it can’t just be there to propel the track. A beat acting out a part as a fractured echo of beats that have gone before it, as a link in an electronic conversation, as erased codes that somehow left enough to fuck up any copy-paste process. Ghosts. And here, presented as such. The beat is our friend throughout; the element that plays a fidgety counterpoint to those beautifully reassuring chords in ‘Zufällig’ or the rude awakener in ‘Bad Comrade’, an imposter sounding like the bin lorry dropping refuse into the chasm of the rear loader. Maybe the stumps and stubbles that give shape to ‘Elizabeth’ are the scratches and accumulated dirt the needle negotiates. These small outliers set up a glorious switch to a jazzy beat that never gets in anyone’s way.

We mentioned melancholy before: some tracks like ‘Elizabeth’ and ‘Beware’ revel in it. The latter is stuffed full of sort of weepy progressions, one such burnished by the strokes of guitar and watery keys: it’s a highly effective piece. On ‘Sea’ the layered sounds and games of footsie played by the harmonics conjure up images of holding photo negatives to the light – experience filtered through melody – a fusion of elements that create a mnemonic backdrop. Here, sounds make an appearance as ancient sun flashes, the things that never get remembered or captured in real time yet continue to act as an emotional compass for the soul.

Then there are the vocals from Laurent John on ‘Made to See’ and ‘Sea’, which work as quiet if beautiful soulful awakenings. John’s soft-buttered vocals – so reminiscent of David McAlmont’s – ride on the swells and eddies of both tracks, as effective a pair of lullabies as you could wish to hear.  We get a final dose of brain balm with last track ‘Katel’, a memory wipe courtesy of a chord progression that sounds as if it’s constantly running up and down stairs.

This is the sound of music made outside of the industry, in the real worlds between people’s heads. None the worse for it. Better in fact.

The post Colourvox – 101 appeared first on Louder Than War.