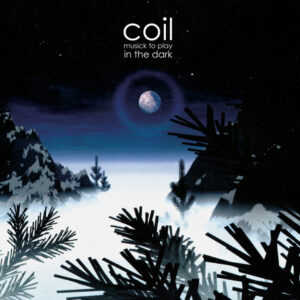 Musick To Play In The Dark Vol 1

Andy Brown takes a step into the darkness to review Coil’s ode to moonlight and madness, Musick To Play In The Dark Vol 1 for Louder Than War. Originally released in 1999, the album is finally getting the full reissue treatment via Dais Records.

By the time I discovered Coil, vocalist and head psychic shaman John Balance had passed away, tragically falling from a two-story balcony in 2004. His musical and one time romantic partner-in-crime Peter Christopherson would follow in 2010. Having distributed much of their own music in purposefully limited runs, the band’s recordings would slip back into the shadows. I was living with a friend sometime around the mid two thousands when I first heard their strange, cerebral moon musick. Here was a band that skilfully avoided easy categorisation yet absorbed elements of dark ambient, industrial and electronica. I’d never heard anything quite like it. This long-overdue reissue of the groups seminal Musick To Play In The Dark creates the ideal opportunity to introduce more willing ears to the occult wonders of Coil.

Peter ‘Sleazy’ Christopherson had already made a name for himself in the late seventies via subversive, industrial pioneers Throbbing Gristle. Alongside Genesis P-Orridge, Cosey Fanni Tutti and Chris Carter, Christopherson would help forge an innovative industrial sound built around synthesizers, tapes and early samplers. Bass, guitar, violin and cornet featured too yet nothing was used in a traditional or predictable way. With Coil he would go on to create a similarly unique and genre-defying sound. Sleazy’s esoteric electronica now enhanced by the prophetic and powerful poetry of John Balance. The group would see a number of members come and go yet John and Sleazy would remain the constant creative force at the centre of this distinctly experimental enterprise. Early albums like 1986’s Horse Rotorvator would help define the confrontational clang of industrial music before developing a thirst for rave culture on 1991’s Loves Secret Domain. This period, broadly speaking, became known as their ‘solar phase’.

The band’s whole existence was based on constant creative growth and saw the duo embrace everything from soundtrack work to instrumental albums of mind-altering drone. It was 1999’s Musick To Play In The Dark, however, that came to define their whispered, dark and immersive ‘lunar phase’. This, for me, is where Coil’s music became something truly magical. Be warned, Musick To Play In The Dark isn’t the kind of album to put on in the background while you do the washing up, nor will it provide adequate motivation for your lockdown inspired jog around the block. This is music to give your full attention to, preferably while lying in the dark with headphones in place. Never has an album title been so thoroughly apt. While there isn’t a guitar solo in sight, the album could almost be described as psychedelic. A quiet, unnerving and transformative form of psychedelia, best enjoyed alone.

Are You Shivering? leers into view with some overwhelming and distinctly frosty synths. Balance appears, breathing ominous incantations down the back of your neck, “Are you loathsome tonight? / Does your madness shine bright?”. Over its near 10-minute duration the track does an excellent job of immersing us in Coil’s dark, mediative world. A skittering and spacious electronic soundscape and the ideal soundtrack to some secretive woodland ritual (or perhaps just your average Saturday night). Red Birds Will Fly Out Of The East And Destroy Paris In A Night follows with some wonderfully discombobulating, expansive electronica. An ambitious, wordless sprawl that evokes the pioneering spirit of Krautrock in the 1970’s. The sense of adventure and experimentation is palatable.

With its slumberous jazz piano, Red Queen expands on the album’s sonic palette yet again. Driven forward by a dark, electronic undercurrent that constantly threatens to pull you under as Balance calmly intones: “Is it so unsafe when you are/ Insecure in the space where you are?” The spectral beauty of Broccoli seeps through my headphones next with Christopherson repeating a sombre mantra: “Wise words from the departing/ Eat your greens, especially broccoli…The death of your father/ The death of your mother/ Is something you prepare for/ All your life, all their lives”. A very human exploration into mortality and the things we leave behind. The music slowly but surely absorbing the listener, the kind of music that seems to stop time itself.

Record crackle, bird song and squelchy beats introduce Strange Birds, the album’s second predominantly instrumental piece. “One day” says Balance as he rears his heads towards the end of the track “your eggs are going to hatch and very strange birds are going to emerge”. It’s enough to send a shiver down the bravest of spines. Balance’s spoken word style throughout the album makes Musick To Play In The Dark play out like the world’s most ominous self-help tape; dark, foreboding hypnosis. The album comes to a close with the shuffling electronica of The Dreamer Is Still Asleep. Dripping in mystery and mysticism: the song creates a mesmeric, devotional and suitably dreamlike tone. Balance standing in ceremonial robes before his faithful flock: “Hush; may I ask you all for silence?”.

It’s hard to describe just how deep this album goes if you’ve got the time and the inclination. Like the music of experimental accordionist and electronic pioneer Pauline Oliveros, Coil have created an album that requires close attention and deep listening. An ode to moonlight and madness that wraps the listener up in an incredibly immersive, nocturnal world. On a personal note, the album stands as one of my favourite albums of all time, a real game changer. A second volume of Musick followed in 2000, so here’s hoping that gets a reissue too. For now you need to bag yourself a copy of the album, turn the lights off and lie down in the dark. I’ll leave you with some wise words courtesy of Coil: eat your greens, especially broccoli, wear sensible shoes and always say thank you.

All words by Andy Brown. You can visit his author profile and read more of his reviews for Louder Than War here

The post Coil: Musick To Play In The Dark Vol 1 (reissue) – album review appeared first on Louder Than War.

Watch this: Metal/prog trip Mountain Caller release new video for I Remember Everything