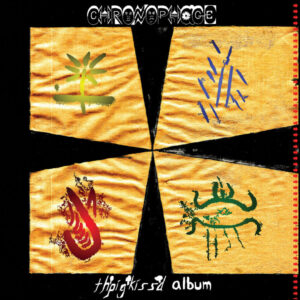 A new Rotterdam label, Soft Office (what a great name), has just sprung into business. The project of a number of city heads more normally associated with Lewsberg and Venus Tropicaux, it’s yet more evidence that certain characters in Rotterdam’s music scene just can’t be happy doing one thing only. Restless? You bet.

Restless is a good way to describe a lot of the music found on their first release, Chronophage’s The Pig Kissed Album. The sort of restlessness that is seen in quickfire mood swings, an over attention to details no-one needs to know about, or its reverse; the state of being happy to “just to get things over and done with” or to leave half finished thoughts out to dry. This Austin, Texas band is keen to tell us that the tracklisting on Soft Office’s EU/UK release is different to that of its US release (on Cleta Patra Records). Does that really matter, and what does it say about the band or labels? I can’t tell, but the European release reveals two very different sides of music in terms of mood. The first side is relatively upbeat if sardonic, a wee bit scatterbrained and very charming. Its cousin on the flipside is harder, sometimes a more downbeat affair, but no less affecting.

The opener, ‘At Last I Am Run Dry’, is a belter, a gloriously messy stop-start pop song. To say it’s loose at the seams is an understatement; the track feels as if it’s about to lose its momentum every second second, and bounces along the road chained to a pretty recognisable melody line. Then we hear ‘Absurdity’, which is as “Postcard” as it gets, what with the beautiful minor chord progressions and the reel and skirl of the drums. Still, the deadpan vocals give it a marked American feel. The same can be said for ‘Junkyard Dreams’ which is a great mix of Josef K and Jeffrey Lewis; namely fabulous, bottom-up pop music. Following that, ‘Passageway’ eventually reveals itself to be a funny soliloquy replete with a scratchy, atonal guitar solo. Maybe that’s what originally altered the Lewsberg crew. Last track on side one is ‘Destiny Falls’ a maudlin lament shaken up by the odd splenetic interlude. It could be a slacker anthem. If it could be arsed, that is.

Side two starts with the downbeat (but charming) ‘Heart Stone’, which leads into ‘Talking Android’ a sort of “telling off” that also, marvellously, sounds like a Simply Saucer rehearsal. For its part, ‘Animate Rose’ is a folksy warning that stretches its few skinny muscles over a steady beat. In fact, the beat seems a lot less frenetic on side two, maybe that’s what drives the difference between the two sides, outside of ‘Siren Faraday’ which is a return to the skittish fun we had on the flip. Last track ‘Name Story’ is akin to a drunken loner walking through different rooms at a groovy party (the crashes and bangs only accentuate this). It’s a moral tale, I don’t doubt.

This is a great record, full of the sort of winsome, jagged, borderline annoying pop music you’d find on the likes of Ostrich Churchyard. Even if everything feels as if it’s over far too soon,(the songs often rush by as if you’re standing by the side of a road watching traffic). But I love it. It’s fun. Get on board.