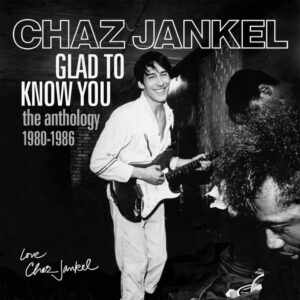 Chaz Jankel – Glad To Know You

An anthology of Blockhead Chaz Jankel’s four solo albums cut for the A&M label in the 1980s, with a bonus disc of single edits, remixes and unreleased material…LTW’s Ian Canty meets the other half of one of the UK’s finest songwriting teams ever…

Though Chaz Jankel will always be associated with his fruitful partnership with Ian Dury, he did notch up a decent solo career away from Blockhead activities. Even so, to a certain extent his highly tasty musical concoctions have taken the backseat to Ian’s expert wordplay. Jankel had been part of psych/soul band Byzantium in the early 1970s and became a big fan of US funk music in his youth. This sound clearly made a lasting impression on the young man.

The influence of that music would show up strongly in his biggest successes later on in the decade. After leaving Byzantium, he first encountered Ian Dury when he was hired as a keyboardist for one of the final Kilburn & The High Roads line-ups. From there, he linked up with Dury to co-write and arrange the songs for Ian’s first solo album New Boots And Panties. This was, of course, was a phenomenal success and became regarded as a one of the classic LPs of the 1970s. Hit singles followed and by the end of the decade Ian Dury & The Blockheads were one of the biggest acts in the country.

Though Chaz left The Blockheads in late 1979 (he was replaced by Wilko Johnson), in his solo works he still called on his sparring partner Dury often to provide lyrics. After his exit from The Blockheads, Jankel was quickly signed up by Byzantium’s old label A&M and released his self-titled debut album, credited as Chas Jankel, in 1980.

The first track on the record, Ai No Corrida, written with Kenny Young (ex-Yellow Dog and co-writer of On The Boardwalk amongst others), became his most well known solo work. It was certainly more than infectious and danceable enough to be a big hit. Unfortunately the cut down single version (it is over nine minutes long on the album) wasn’t a smash for Chaz himself, but a year later funk legend Quincy Jones covered it and scored high chart placings in both the UK and US.

The LP itself is something of an oddity, with the two long tracks, the aforementioned Ai No Corrida and a near quarter of an hour of Am I Honest with Myself Really? towering over everything else. When Chaz got in a good groove, which he does after the considerable fade in and intro to Ai No Corrida, he stayed there.

Peace At Last, takes things down after the lively opening track, with a gentle piano and delicately applied bass, before we’re into a twisting funk reggae combination called Just A Thought. The burbling electronics of Fuse lead directly into Am I Honest With Myself?, a real funk/pop monster. Another gentle piano piece with jazzy sax Reverie brings things to a close. Chaz has a decent enough voice, perhaps not anywhere near as distinct as Mr Dury, but it is a pleasing fit for the material contained here.

Chaz Jankel the album is pretty good, very accomplished musically as you might expect and the two lengthy tracks are out-and-out showstoppers. So why didn’t it make much of a mark? Well if people had followed him from The Blockheads they might relish the music on offer, but it is a little lop-sided and for all his many talents Jankel wasn’t quite a natural front man and it does show a bit here.

After the second Ian Dury & The Blockheads album, the ironically titled Laughter, was recorded among much rancour, Dury drifted back into Chaz’s orbit. In addition to playing on Dury’s Lord Upminster LP later on in 1981, Jankel and Dury also paired up to write a large part of the Chaz’s second album Chasanova. This was also released in America under the title of Questionnaire, which substituted the extended single versions of Glad To Know You and Questionnaire for the original album versions. It is in this form that the record is presented, with the two UK edits of those songs tagged on at the end.

The very catchy single Glad To Know You was deservedly quite successful in the US, topping Billboard’s Hot Dance Club Play chart and also hitting fifty seven on their r&b listings. The 12 inch version came with Ai No Corrida and 3,000,000 Synths on the flipside and all three tracks added up to what became a hot disc at Larry Levan’s trendy Paradise Garage night. This success happened with Jankel totally unaware of it, until during the Lord Upminster sessions Sly Dunbar saw it in the charts whilst browsing an issue of trade paper Music Week.

Elsewhere on the LP, 109 is a tight funk groove and Questionnaire was really unlucky not to reproduce or even better Glad To Know You’s success. Magic Of Music is a smooth reggae skank that has some of Rico’s one-of-a-kind trombone sound floating elegantly amongst it and Boy’s soulful slow jam shows The Blockheads’ rhythm section Norman Watt-Roy and Charlie Charles on good form. 3,000,000 Synths is a really hot piece of electrofunk too, ably demonstrating why it was so highly rated on dancefloors stateside. Chaz sounds more confident vocally here and having Norman’s elastic bass on hand for four tracks was a real bonus on what is a consistently enjoyable collection. My personal favourite of the four albums presented here.

By the time of third album Chazablanca, Chaz had reclaimed the z on his name and is listed as such. It also seemed he was setting himself up as the Greg Kihn of the UK, with regard to punning with his album titles that is. Watt-Roy and Charles were back to provide bass and drums here and with the Tom Tom Club’s Laura Weymouth, sister of Talking Heads’ Tina, on backing vocals and co-writing duties (though Dury popped up on All I Want to Do Is Dance), the signs all looked good.

Whilst Chazablanca is a decent enough record, it didn’t capitalise on the success of Chasanova and to be honest it isn’t quite at the same level as its predecessor. However, it does contain the prime electro, dance-orientated Pretty Thing and a fine single in Without You. Horns-led and synth funky, this was a very catchy item indeed and unlucky not to prosper in the charts. Mostly the rest of the album is solid enough dance material without really standing out. The exception is the sole Jankel/Dury number, All I Want To Do Is Dance. Though not rated among Ian’s best lyrics there’s some neat lines, including “let’s twist down Wembley Way” which just screams Dury.

A couple more years elapsed before Looking at You, his final album for A&M, in 1985. Here Chaz embraced a modern (for the time) dance pop sound. Number One was the first single from the LP and was written with Ian Dury and Norman. This was the theme tune to a TV film based around snooker and starring Bob Geldof (well it was the 80s) and the song had all the tools to succeed in some wry lyrics and some thumping big beats, but unfortunately it did not make any headway. Jankel’s commercial standing had slipped as the years went on and even high profile TV exposure like this couldn’t help.

Even so there are some good melodies on this LP, including the sweet jazz pop love song The Boy On The Bridge and a tense mid-paced funker Little Eva, both collaborations with Dury again. I couldn’t help but think though that the 1980s production style employed here took something away from Jankel’s individuality, which already hadn’t proved strong enough to truly connect with pop fans. Having said that Looking At You was another good single in a lighter dance music style and the space sounds and tough hip hop beats of opening track Hard Music work very well.

Chaz did record a fifth album for A&M that was ultimately rejected by the company. The 1986 single You’re My Occupation, which is the first track on the rarities disc here, was the only item from it ever to gain release. Again this is a really good single with a fine vocal from Brenda Jones, but the record company didn’t want to go on with the LP after its failure to chart. It’s followed here by a near unrecognisable version of Questionnaire, which is stripped down right down to bare bones of percussion beats and retitled Reve de Chevre.

There’s a lot of good lengthy mixes of the singles on this last disc, with the extended version of Without You being particularly pleasing. Chaz’s “biggie” Glad To Know You gets reworked as anagrammatically as To Wou Lady Kong into a tight reggae style with some engaging piano riffing, and the restrained keyboards and beat attack of 3,000,000 Synths (Single Edit) really suits its deadpan nature of the song. This section of the set ends with with a couple of neat dub versions of You’re My Occupation and No. 1.

After all this Chaz reconnected with Ian and The Blockheads for the excellent Mr Love Pants album. After Dury passed away in 2000, The Blockheads have continued recording and touring, both honouring his unique work and cutting their own new material too. In 2001 Chaz finally got to make his fifth solo LP, Out Of The Blue, and has continued in his own right on another four albums, the most recent of which was 2010’s The Submarine Has Surfaced.

Glad To Know You, over the course of four enjoyable albums, confirms the man’s highly developed talents for musical arrangements and infectious dance rhythms, something that perhaps isn’t quite matched by Chaz’s serviceable but not quite distinctive enough voice. Nevertheless there many satisfying and smooth funk grooves on this boxset to really kick off a party in style. Chasanova/Questionnaire is a fine LP and some Jankel/Dury gems are sprinkled throughout and just add more glory to The Blockheads’ legend.

The post Chaz Jankel: Glad To Know You – album review appeared first on Louder Than War.

Watch this! Night Beats share new video for single That’s All You Got