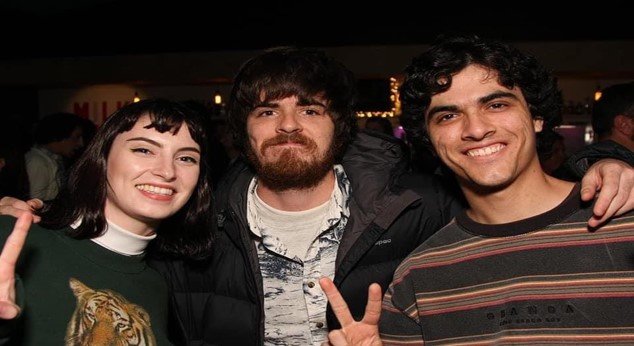 Acclaimed local instrumental trio Yomi Ship are collaborating with the Explosive Dance & Theatre Co to present a special performance of their EP, Pyramids Of Yonaguni, by way of headlining the City of Armadale’s eight-band Far Out Fest line-up on Saturday, May 1.

Far Out Fest is part of the two-week long Armadale Arts Festival and sees Yomi Ship returning to perform in the area where they each grew up and originally formed the band.

“It’s been about a decade since we were last doing things locally around Armadale,” days drummer, Nick Osborne, “so it’s good to come back and revisit our roots. It’s really nice to get back in touch with it all and help get the community together.”

The production itself is based on Yomi Ship’s 2019 EP, Pyramids Of Yonaguni, inspired by a series of mysterious pyramids off the coast of Japan.

“It follows a theme about the Pyramids of Yonaguni, when they were built, the history behind it and also what else could there be lurking underneath there?” says Osborne.

“Our collaboration with the Explosive Dance & Theatre Co has helped build a conceptual idea that runs through the whole set. So there’s a mix of band and performance; some individual and some together, exploring the different themes of what else could be existing underneath the pyramids? It ties it all together, basically.”

The creative collaboration with Francine Brereton’s Explosive Dance & Theatre Co has been fascinating for the band, who always welcome new ideas and reflections about their work.

“All of our music and even our artwork is something we leave open to interpretation,” Osborne notes. “So there’s lots of what-ifs and possibilities behind other scenarios. When people describe what they get from our music it’s very rare to get the same emotion from two different people. It’s all open to interpretation which is exactly why we really appreciate the creative response of the Explosive Dance & Theatre Co. It’s why the collaboration works so well.”

Another underlying aspect to this performance will be the accompanying visuals, an augmented underwater reality art installation brought together by award-winning audio-visual artist/musician/producer Roly Skender of Frankensound, certainly a go-to operator in Perth when it comes to joining together sound and vision.

“Roly’s been sent some secret artwork that’s no one’s ever seen before,” Nick says of the underwater wonderland being created by Skender, “so he’ll bring something really nice together.”

Produced with funding from the Department of Local Government, Sport and Cultural Industries, the Far Out Fest performance will bring to a close the Pyramids Of Yonaguni era for Yomi Ship, who will soon release a new single, Ice Drake. The possibilities of where this expanded artistic collaboration could springboard them in the future is exciting indeed.

“We’re hoping to engage the audience for an entire performance,” Osborne says. “There’s always going to be something happening that will take you on a journey and open people’s interpretation of what they perceive the performance to be.

“Hopefully they’ll walk away with a little more appreciation of the arts, for both dance and music, showing that you can combine the two. We always try to branch out our creative ideas and processes.”

Triangle Fight are back with their new album ‘Skeleton Songs‘ to rattle the Goodwill Club on Saturday, December 19th, 2020. Joined by Perth legends Yomi Ship, Will Stoker & The Embers and Sonnenmasse, cheap presale tickets available 12th November, so save the date and stay tuned for updates.

Triangle Fight are a 4-piece avant-rock band with 3 releases under their belt. ‘Skeleton Songs’ follows on from 2018’s ‘The Blood Giant’, an ambitious music album/alternate reality game with clues enmeshed in the accompanying 27 minute short film of the same name. ‘Skeleton Songs” is the spiritual successor to “The Blood Giant’ and provides an answer to the labyrinth of hidden detail with frank and honest song-writing laid over trademark hooks and fearless genre exploration. A highly personal body of work, it also deals with themes of denial and regret while looking to the future with hope and a sense of triumph through growth.

Instead of traditional means of releasing music, Triangle Fight are releasing a limited run of the album, embedded on a flash drive encased in a concrete cast artwork designed by Paulo Gonzalez, who is the frontperson of the group.  The album will also be available for digital download on Bandcamp. Check out their 3 other releases through that platform or on Spotify.

Yomi Ship draw from experimental rock artists Mars Volta, Pink Floyd and Tool to craft their signature sound, a perfect compliment to the upbeat avant-garde rock explorations of Triangle Fight. Will Stoker & The Embers sing hard and play hard, and have a new album in the works. Sonnenmasse is the heavy-wonderful solo project of Beaverloop’s Leon Ewing and completes an unmissable line-up.

‘Skeleton Songs’ will be streaming on all platforms in December.