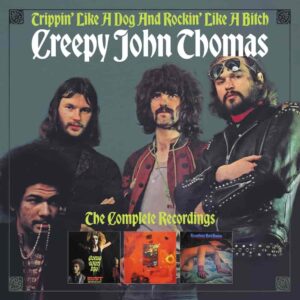 3CD set containing the two Creepy John Thomas albums from 1969 and 1971 respectively and the earlier Come With Me LP, cut under the name of Rust…Ian Canty meets the man who links Australian r&b/freakbeat, psychedelia, The Edgar Broughton Band and Eurythmics…

Creepy John Thomas (ooer) may sound very like an oddball Vic Reeves character. But in fact he was one of those people who, through a series of chance connections, linked some very different scenes indeed. After a very young John caught the first wave of rock & roll in his New South Wales home, he set about learning the guitar in order to emulate these new heroes from the USA. From the end of the 1950s onwards he was involved in a number of rock outfits in his home country, leading up to the formation of The Flies in 1963.

Taking the bass player and drummer of his former group The Renegades, Themi Adams and John Wallis, with him, the Flies’ line up was completed by singer Ronnie Burns. Over the next few years, The Flies clocked up a number of high profile support slots and TV appearances, plus a few hit singles including Doin’ The Mod. But when Burns decided to depart for a solo career (read here for how that turned out) and despite trying out a new singer in Peter Nicholl (ex-Wild Colonials), they quickly fell by the wayside.

John decided at this time to move to Düsseldorf, Germany, where his girlfriend at the time hailed from. Music still played a large part in his life though, as he was installed as the DJ at the local psychedelic nightclub Creamcheese. In 1968, the German division of EMI got wind of John’s talent and success down under and, as a result, offered him a recording contract. Thomas did not have a band at this point in time, so he nipped over to England and, in time-honoured fashion, stuck an advert in Melody Maker.

The ad bore fruit in the guise of bass player Walt Monaghan and his drumming chum Brian Hillman. The trio hit it off when meeting for the first time at the Hope & Anchor Islington (a good few years before that place became a pub rock mecca) and they took off to Germany, playing gigs at army bases to hone their craft.

By the time they recorded the Come With Me album in EMI’s Cologne in the final months of 1968, they were using the group name Rust. It was only just and fair too, because Walt and Peter by all accounts brought far more to the table than just being mere sidemen. They wrote a large part of the album and Walt shared singing duties with John too. Come With Me emerged early in 1969 on Hör Zu/Columbia. It only ever saw release in Germany and didn’t even make much impact there. The record label clumsily stuck the word underground on the cover to inform interested heads of the contents, but this served to confuse matters. It looked for all the world that the band were called Rust Underground.

Anyway, the Rust album may something of a period piece, with all the songs being linked with segues, something that was in vogue at the time. Also the vocals occasionally sound a bit sibilant and wobbly. However this was actually a really good LP, putting any sound and packaging issues to one side. The back of the sleeve was great too, making up for the faux pas on the front with an excellent photo of the three band members perched on German polizei motorbikes.

As for the music, after a brief snatch of the title track we come to the excellent You Thought You Had Made It, which has an indefatigable garage punk attack. Think Big has a bit of the relentless drive of The Seeds and Delusion steams along splendidly, a little like if Motorhead were a psych band. John’s throat rasp did recall Mr Kilmister by coincidence.

Showing that they had more than one speed, the title track is a great piece of soaring 60s pop that Procol Harum would have been proud of and the gently chilled jangle of Find A Way is a beauty. Signing off with a r&b rock rumble in The Endless Struggle, Come With Me is a truly rewarding psychedelic platter that should be better known.

After Rust disintegrated, John made an important connection with budding sound engineer Konrad (Conny) Plank through his girlfriend Rosie. With Conny’s help, John began to cut demos for a new album with a rhythm section of bassist Andy Marx (who also played some guitar too) and Helmut Pohl on drums. Taking the tape back to London, John managed to secure a deal with RCA and the band started to work under the Creepy John Thomas name. The moniker came from a r&b song that was big on Australian 60s scene, Thomas having played it as part of The Flies.

The self-titled album emerged at the end of 1969. Though there were some links to the more psychedelic Rust LP, Creepy John Thomas came together as its own thing here. It gets underway with the freewheeling blues rocker Gut Runs Great Stone, replete with ever so gruff vocals and much guitar soloing. (Do I Figure) In Your Life and You’ve Got To Hide both have spikey guitars and are also very accessible, with the latter being especially dynamic and tuneful. John’s stream of consciousness lyrics are often obscured by the delivery, which may be a good thing as by his own admission he was free-forming and mentioning the Vietnam war a lot. Still you don’t really notice it too much, it is just an element of the very meaty sonic soundscape the band offer.

Green Eye Lady packs a tough wah wah punch and the fuzz funk strut of Sun And Woman shows what CJT could do as a band, great drum work and a sinuous, lithe bass line. Starting out with a ramshackle rhythm and acoustic soloing, Bring Back Love echoes in and out before the album climaxes with sweeping momentum of Moon And Eyes, which again is very listenable and brutally administered. Creepy John Thomas the album is another ton of fun, with the band never forgetting to season their blues rock/underground attack with great tunes and new ideas.

After their first album, Creepy John Thomas began work in Germany on new material for another album with Plank, but RCA were not interested. John then spent the larger part of in 1971 in the US. However, Conny phoned him with the news that he managed to score a deal with Telefunken label. The Brother Bat Bone actually should have been entitled Brother Bad Bone, but Conny Plank misheard John’s intent and unfortunately relayed the incorrect moniker back to Telefunken, who ran with it. So Brother Bat Bone it was.

Clad in a bizarre sleeve illustration of a wolfman and men wrestling with somewhat phallic plant roots, this album again was a step on from the previous record. More firmly in a blues rock mode, for me the six track LP only really takes off on what would have been the vinyl side two. The hard rock riffing of album opener Down In The Bottom is pretty good, but This Is My Body and Standin’ In The Sunshine really shine on the flipside.

The former borders on heavy psych and is propelled by some snappy guitar and John’s “sleepy Lemmy” vocal style. It’s very good and Standin’ In The Sunshine builds on this admirably, there’s a laidback cool and funky touch here which helps the surges of power have all the more impact. If the rock & roll final offering 100lb Noomy is a bit of standard boogie, it momentum carries it on and means side two of Brother Bat Bone is a breeze. Taking things as a whole, Brother Bat Bone was another decent showing, but did nothing sales-wise and was sadly not to be followed up.

After this, John joined the Edgar Broughton Band in 1975. He had become friendly with Steve Broughton and their rough blues rock sound was a good fit for him. Later he joined Annie Lennox and Dave Stewart’s pre-Tourists band The Catch. This in turn led to Lennox and Stewart being introduced to Plank, who would go onto produce their band Eurythmics in the 1980s. John still records today and is keen to get back out on stage again with his band The Drivers as soon as the pandemic allows.

Trippin’ Like A Dog And Rockin’ Like A Bitch is a highly enjoyable collection of the various guises of John Thomas. The Rust LP didn’t even gain a release outside of Germany, a crying shame as it really is a great late psychedelia record. Another good thing about this set is you can see the progress as things go along – those trippy Rust roots are never really lost and that helps to make the second two discs in the set far more entertaining than the standard blues rock of the time.

The bands Rust and Creepy John Thomas may well have not had the best name in the world, or a lot of luck. But this 3CD proves they had plenty going for them – fine musicianship, plus great tunes and ideas which helped this listener scoot over the occasional dodgy lyric and bass solo. They pretty much flew “under the radar” at the time, but Trippin’ Like A Dog… is full inspiration and should appeal to any discerning psychedelic, heavy blues or proto-metal afficiando. Apart from Germany the world didn’t listen in 1969 to 1971 – now we have the chance to catch up and it is one not to miss this time around.