Jon & Lee and The Checkmates 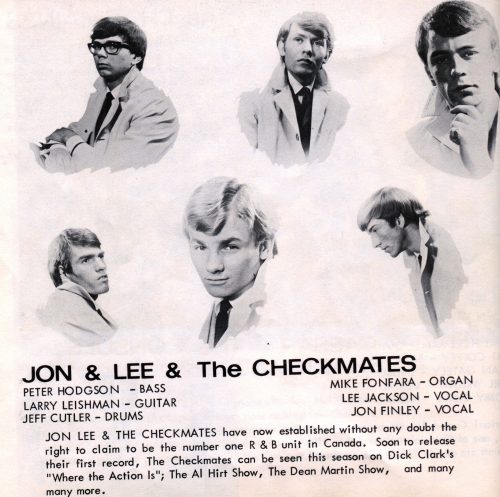 Towards the end of 1963, the group’s manager introduced a second lead guitarist, Larry Leishman (b. 4 April 1947, Dunfermline, Scotland) from local band The Tempests.

The new line-up however, was short-lived as Dorsey soon left. His departure precipitated a series of personnel changes and by mid-1964, former Esquires singer John Finley (b. 6 May 1945, Toronto, Ontario) and his cousin, bassist Peter Hodgson (b. 16 April 1946, Toronto, Ontario), also ex-The Tempests were added alongside drummer Wes Morris.

Morris’ predecessor, Dave Brown meanwhile had gone on to join Jay Smith & The Majestics. When Morris left to join The Majestics in the summer of 1964, the group added Jeff Cutler (b. Rowland Jefferies Cutler, 8 September 1941, Toronto, Ontario).

The new line-up quickly changed its name and was picked up by local booking agent, Ron Scribner, who organised concert dates in high schools across Ontario to promote the band.

In early 1965, the band moved up to the city’s vibrant club scene and for a while were residents at Yorkville’s Avenue Road Club and the Devil’s Den. In April of that year Jon & Lee and The Checkmates opened for The Rolling Stones at Toronto’s Maple Leaf Gardens, followed by what was probably their most prestigious concert performance, an appearance (in front of 60,000 people) at Nathan Philips Square in September supporting Bobby Curtola.

Around this time, the group cut two songs on four-track with their manager and musical director, Eddie ‘Duke’ Edwards, which led to TV appearances in Buffalo and New York.

The band also attracted the attention of American record companies RCA, Motown, Mercury, Elektra and Decca; they actually cut some demos with the latter in New York but they were never issued.

During 1966, the band traveled to New York and played at the Phone Booth and the Peppermint Lounge. The group also performed alongside Junior Walker & The All Stars, The Chiffons and The Temptations at Shea Stadium. On 21 August, the group appeared on Compass on Channel Six.

That same year, Edwards composed ‘Batman Batusi’, which the band recorded for the ABC-TV Network. The track appeared on a rare 45 with the A-side performed by another group.

Shortening their name to The Jon-Lee Group in June 1967, the band travelled to New York to play at Steve Paul’s The Scene and to record for ABC Records.

The band completed four tracks, including a cover of The Lovin’ Spoonful’s ‘Girl Beautiful Girl’, which never saw the light of day.

Instead, the label chose to release the soulful ‘Bring It Down Front’ with the instrumental rocker ‘Pork Chops’ (credited to Edwards, and provisionally titled ‘Fuck Up’). 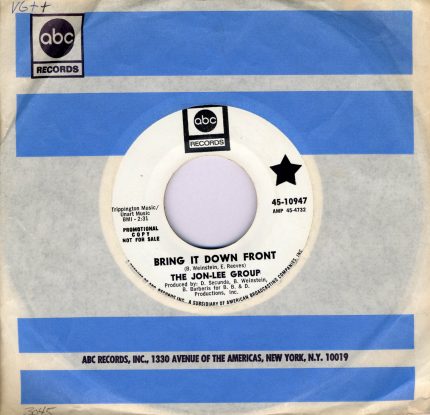 The single subsequently reached #23 on the RPM chart in October, when it was released in Canada by Sparton Records. The single also hit #10 on Toronto’s Chum chart.

On 31 July 1967, the band returned to Toronto for its final set of gigs. The band’s music started to take on a more psychedelic bent but didn’t go down so well with audiences.

Jackson and Finley separated from the band in mid-September 1967 and the others moved to New York to become the house band at Steve Paul’s The Scene. For a while they acted as David Clayton-Thomas’ support band, The Phoenix.

However, when Thomas was deported from the US in November for being an illegal alien, Fonfara joined The Electric Flag (in time to appear on their debut album) and toured with the group for almost a month before running into Finley and Hodgson in L.A in early December.

Both had auditioned for Elektra’s new band ‘Project Super group’ (which later became Rhinoceros) and although Hodgson missed out on the original line-up, Finley was recruited, and duly recommended Fonfara for the band. Hodgson and Leishman would later join Rhinoceros together with Duke Edwards.

Lee Jackson meanwhile remained in Toronto and reverted to his former name. He later went on to work with Bruce Cockburn briefly and became a local rock promoter. In the early ‘70s, he worked for the Toronto Stock Exchange and ran a small studio before joining a floor-covering firm in 1974.

Jeff Cutler, who briefly worked with The Holy Modal Rounders and The Crazy World of Arthur Brown, later became a movie set producer.

The others (minus Cutler and Jackson and with new members) reformed as Blackstone in 1972. 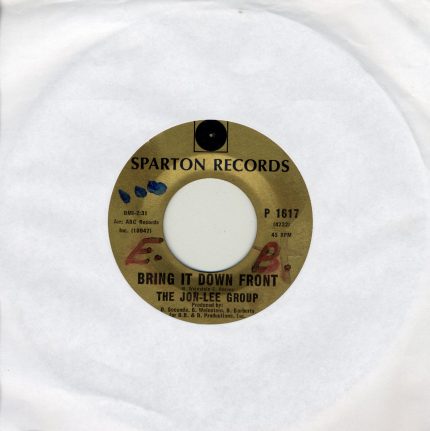 Advertised gigs (as Jon & Lee and The Checkmates)

25 April 1965 – Maple Leaf Gardens with Rolling Stones, The Paupers and others

31 October 1965 – Maple Leaf Gardens with Rolling Stones and others

19 June 1966 – Broom and Stone, Scarborough with David Clayton-Thomas and The Ugly Ducklings

28 August 1966 – Broom and Stone, Scarborough with The Just Us and All Five

19 November 1966 – Gogue Inn, Toronto with Jaye’s Rayders and others

31 December 1966 – Gogue Inn, Toronto with Eddie Spencer & The Power and The Wyldfyre

4 February 1967 – Gogue Inn, Toronto with The Five Good Reasons and The Paytons

6 May 1967 – Gogue Inn, Toronto with Jack Hardin & The Silhouettes and Simon Caine & The Catch

20 May 1967 – Centennial Cool-Out, Kingston, Ontario with The Guess Who, The Esquires, The Townsmen and others

8 September 1967 – The Thing, Toronto with The Power Project

Toronto live dates were taken from the ‘After Four’ section of The Toronto Telegram.