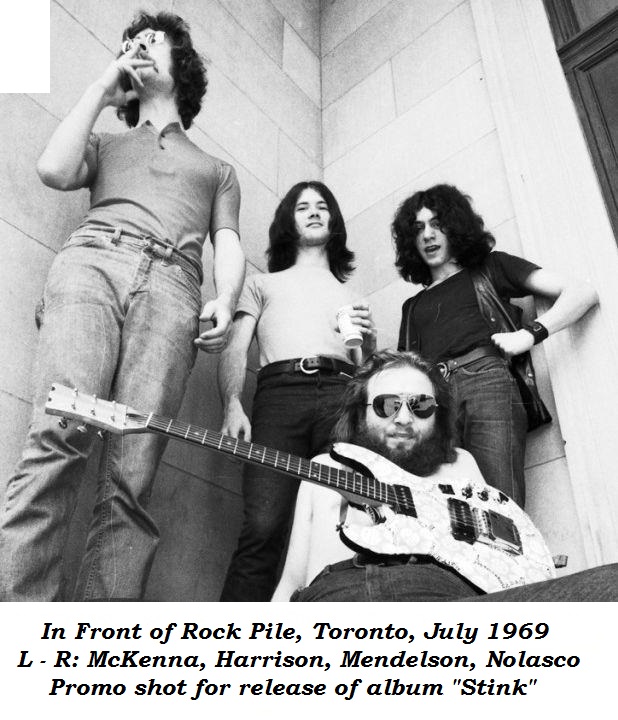 Following a brief spell in The Ugly Ducklings, former Luke & The Apostles guitarist Mike McKenna (b. 15 April 1946, Toronto, Canada) put an ad in a local paper (around May 1968) searching for blues enthusiasts interested in forming a band.

Local singer Joe Mendelson (b. Birrel Josef Mendelson, 30 July 1944, Toronto, Canada) answered his ad, and together they formed the basis of this musically interesting group.

A very short-lived line up formed with former Luke & The Apostles drummer Pat Little (b. 10 March 1947, North Bay, Ontario, Canada) and bass player Timothy Leary (not the more famous US namesake) but it never got passed rehearsals.

Soon afterwards, former Paupers member Denny Gerrard signed up alongside drummer Tony Nolasco (b. 9 July 1950, Sudbury, Ontario, Canada), who had spent a year with The Spasstiks and was only 16 years old when he arrived in Toronto.

The quartet began advertising its talents in mid-June and recorded a demonstration tape over a few days in early September, which was subsequently issued as a “legal bootleg” by manager John Irvine, who had the legal title to the tapes but released it without the band’s approval. This line -up also became residents at Toronto’s Night Owl.

This line-up opened for John Lee Hooker at the Rockpile before moving to London, England in December.

Mendelson and McKenna arrived on 10 December, Harrison on 15 December and Nolasco on 26 December.

The band built up a steady following on London’s blues circuit and also played some dates on the continent, including the ‘Flight to Lowlands Paradise 2’ concert, in Utrecht, The Netherlands on 27/28 December alongside Pink Floyd, where the Canadian band was reputedly the only group to receive a standing ovation. (Nolasco had only arrived in England on 26 December!)

During their stay in London, McKenna Mendelson Mainline won a recording deal with Liberty Records and in April and May 1969 recorded the album Stink, generally considered to be the band’s best work, at Trident Studios in London’s Soho district.

By the time it was released in July the musicians were back in Toronto, where they were greeted as returning heroes.

The single, ‘Better Watch Out’ reached #47 on the Canadian RPM chart and the album sold very well.

However, despite the LP’s success, the group’s career was about to grind to a halt.

On 23 November 1969, Mendelson guested with Whiskey Howl at Toronto’s Night Owl, which was a precursor of things to come; he left abruptly [late] the following month for a solo career.

During the early part of 1970 McKenna found time to record with a revamped Luke & The Apostles and the group was put on hold.

Mendelson however, decided to reform the band in March 1970, recruiting former Franklin Sheppard & The Good Sheppards singer Zeke Sheppard on bass alongside Nolasco.

The group, now named simply “Mainline”, was invited to play at the Scarborough Fair Festival in the summer, and Mendelson decided to ask McKenna to join the band for the one show.

The concert was a great success and McKenna was invited to rejoin full-time. The new line-up embarked on a tour of Australia in 1971 as opening act for Frijid Pink.

During this period the band scored another hit with the single ‘Get Down To’, from the 1971 GRT LP Mainline: Canada Our Home & Native Land. The single hit #45 in April 1972.

In late 1971, bassist Ted Purdy replaced Sheppard and appeared on the 1972 GRT album The Mainline Bump & Grind Revue. This version of Mainline dissolved in late 1972.

“King Biscuit Boy Meets Mainline” was booked for an Australian tour, but Richard Newell’s fear of flying prevented his participation.

In June 1973, Joe Mendelson replaced Newell for the Australian tour, so the Stink album quartet of McKenna, Mendelson, Harrison, and Nolasco was reunited (with Larry Leishman added) for the first time since December 1969.

After the Australian tour, the Biscuit Meets Mainline band reassembled for several months, but dissolved later in the year. Contrary to legend, this band never recorded or released any material.

On 31 December 1973, the quartet of McKenna, Mendelson, Harrison, and Nolasco presented “The Mainline Bump & Grind Revue” at Toronto’s Victory Burlesque Theatre. The show was broadcast the same evening on TV Ontario.

In 1974, Mendelson decided to reform the band. McKenna and Nolasco agreed, but Harrison opted out, and female bassist Leslie Soldat was recruited. This line-up, most notable for opening for Rush at Toronto’s Massey Hall, dissolved in less than a year.

Mendelson resumed his solo career while McKenna had brief spells with The Guess Who and The Downchild Blues Band.

In 1997, McKenna and Gerrard formed Slidewinder and recorded an LP for the Pacemaker label.

The band recorded a CD, Last Show @ The Elmo for Bullseye in November 2001. The CD release party was at Toronto’s Hard Rock Café in December 2002.

6 October 1968 – Massey Hall, Toronto with The Fugs and Transfusion (Gerrard’s final show as Toronto Telegram’s 19 October issue reports he’s back with The Paupers)

29 May 1969 – The Marquee, London with Howlin’ Wolf and The John Dummer Blues Band

7 February 1970 – Our Lady of Fatima Hall, Toronto (without Mendelson)

30 May 1970 – Electric Circus, Toronto (McKenna rejoins after this show)

4 July 1970 – Memorial Gardens, Toronto with The Guess Who, Manchild and Balazar

I don’t think this tour of Australia and New Zealand happened. They toured in 1971 and then again in 1973

Huge thanks to Mike Harrison for his help with this entry. Thanks also to Mike McKenna and Tony Nolasco.

Thanks to Cole Mathieson for the Concorde Club, Southampton gigs at the Bassett Hotel.