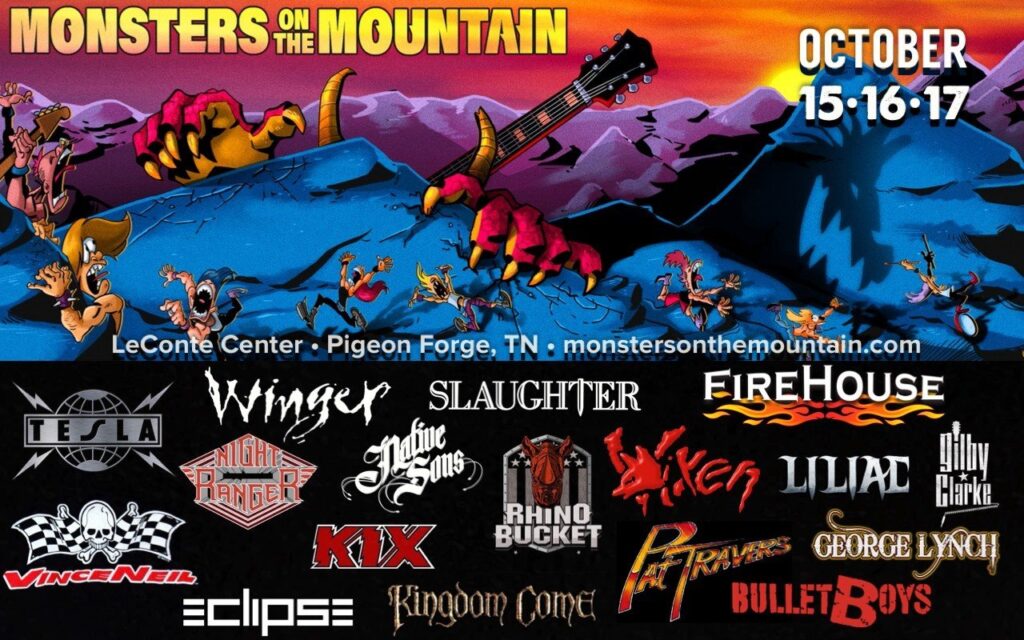 The inaugural Monsters on the Mountain (MOTM), a three-day hard rock music experience brought to you by the creators of the pioneering Monsters of Rock Cruise, has been announced for this October 15th-17th at the LeConte Center at Pigeon Forge in Tennessee’s beautiful Great Smoky Mountains.

This immersive fan and artist celebration will be the first “Monsters” event in almost two years, so attendees will definitely be celebrating MOTM’s theme, You Can Still Rock In America!, as they witness performances from over 20 rock acts, plus an array of interactive events and activities. All ticket holders will not only receive complimentary parking and unlimited access to the performances, but also access to the Rock N’ Roll Vendor Market, Rock N’ Roll Art Gallery, and The Ultimate Tailgate Party, with more to be announced.

The public on-sale kicks off today (6/11) at 12 Noon ET, with three-day packages starting at $265.00 per person (plus ticketing fees and taxes) and individual day tickets also being available. For more info and to purchase tickets, visit MonstersOnTheMountain.com and follow Monsters of Rock Cruise on Facebook, Instagram, and Twitter for updates as well.

Located along the banks of the Little Pigeon River, the LeConte Center at Pigeon Forge is the perfect setting for the inaugural Monsters on the Mountain. The architecture and design of the venue exudes a mountain lodge ambiance that amplifies the serenity of the Great Smoky Mountains. When the design and planning for this impressive event and concert venue began, the name was chosen as a tribute to the building’s spectacular view of Mount LeConte in Great Smoky Mountains National Park. For 60 years, visitors have been returning year-round to Pigeon Forge, TN, as the little mountain town and family-friendly vacation destination is filled with fun activities ─ from thrilling attractions and award-winning shows, to countless options for dining, shopping and lodging.

With a myriad of events, activities, and music to keep fans entertained day and night, Monsters on the Mountain promises to be the biggest event of 2021 for hard rock music enthusiasts.

Eclipse are unquestionably one of the greatest and most consistent bands of the modern hard rock era. Now we get a new live CD/DVD, a happy accident after the guys set up recording and filming of a hometown gig themselves. It turned out so well the band offered it to their label, who were wise to act upon it immediately.

The set is really well recorded (and filmed) and sees the guys at the top of their game as far as performance, stage craft and energy in delivering these songs.

Viva La VicTOURia takes in the band’s performance in Gothenburg, Sweden on December 21, 2019 and covers 18 tracks as well as 3 songs from the Quarantine Live broadcast earlier this year, the studio version of their cover of Driving One Of Your Cars and 2 recent acoustic bonus tracks.

That makes for a 2CD 24 song set plus a DVD and if that doesn’t convince you this is a mandatory purchase, then nothing will. Absolutely essential! Frontiers Records [Release Date 6.11.20] This package of goodies from Eclipse is very timely, as their last album ‘Paradigm’ rather got swamped in the rush of autumn 2019 releases, then after gearing up for a huge tour, it never reached … Continue reading → Escape Music [Release date 20.11.20] Heartwind formed around keyboard player Mikael Rosengren and guitarist Goran Engvall (who also played bass on the album). Since their debut release they have changed vocalists bringing in not one, but two vocalists – Nina … Continue reading →

The post Album review: HEARTWIND – Strangers appeared first on Get Ready to ROCK!.