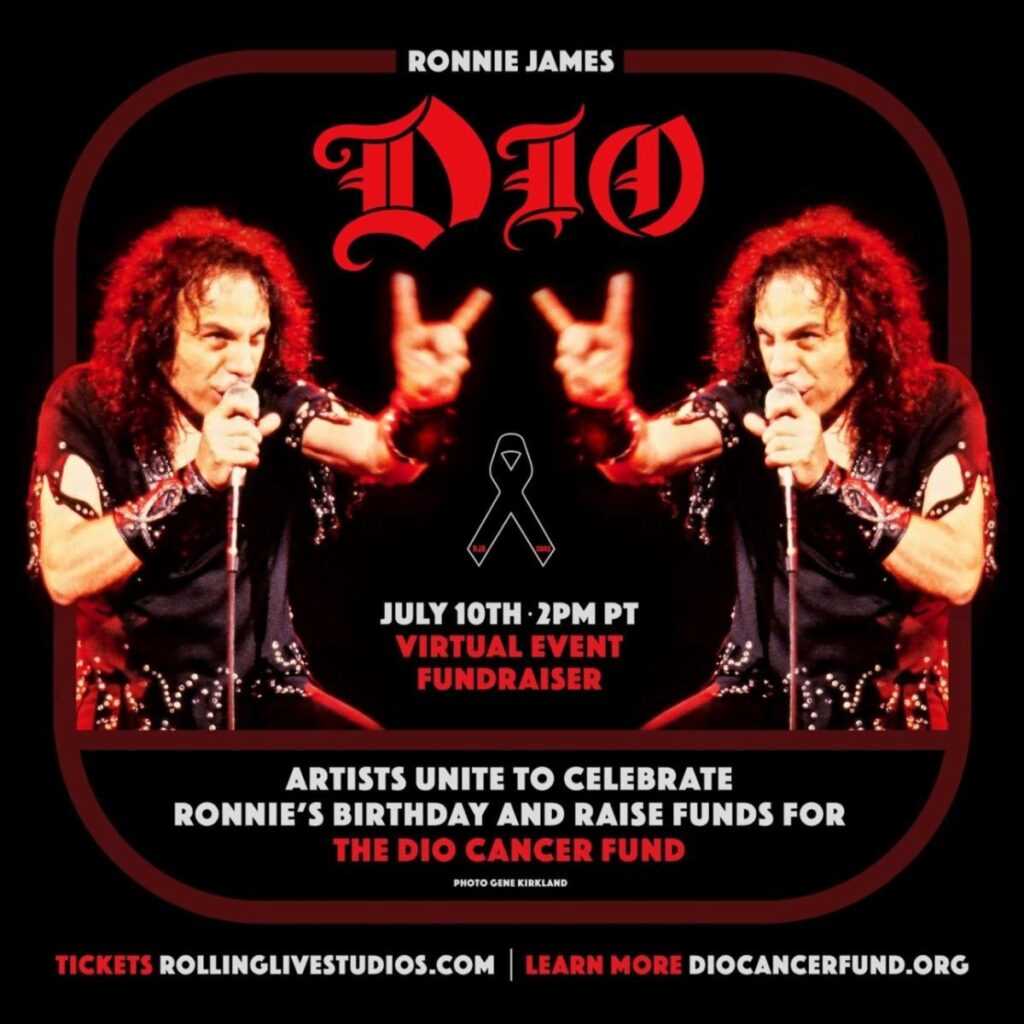 STAND UP AND SHOUT FOR RONNIE JAMES DIO’S BIRTHDAY, the Saturday, July 10 global virtual concert produced by Rolling Live Studios, has added a wealth of talent to the already star-studded lineup that will bring together unusual musical pairings for one-of-a-kind performances, special birthday messages and artist interviews. The event, hosted on rollinglivestudios.com beginning at 2:00PM Pacific time (PDT), will benefit The Ronnie James Dio Stand Up and Shout Cancer Fund (www.diocancerfund.org), founded in memory of the late heavy metal icon who was the voice of Elf, Rainbow, Black Sabbath and DIO before losing his battle with gastric cancer in 2010.

Tickets are on sale now at https://rollinglivestudios.com/dio. In addition to $20 General Admission tickets to view the show, Rolling Live Studios is offering special merchandise packages and virtual VIP experiences for fans to participate in this unique worldwide event. The “Dio Ultimate Bundle Auction” comprises rare Dio-themed items hand-picked from the vault by Wendy Dio, including vintage tee-shirts from 1980’s tours, an authentic autographed photo of Ronnie James Dio, rare die cut picture disks and vinyl boxed sets, and an assortment of vintage backstage passes.
There is also an auction for a one-of-kind Dio-themed leather jacket that will be custom made for the winning bidder by celebrated artist Carin Hazmat. The final design is expected to be unveiled just prior to the event. Another value-added package is a “grab bag” of specially selected vintage DIO and Dio Cancer Fund event merchandise, as well as a limited number of copies of RAINBOW IN THE DARK: THE AUTOBIOGRAPHY, written by Ronnie James Dio (with Wendy Dio and Mick Wall) and signed by Wendy Dio, which are being made available prior to its publication and availability to the public on July 27. Specially designed event tee-shirts, baseball caps, laminates and lithographs can also be purchased along with an event ticket. Ticket packages that include access to a Pre-Show Virtual Meet & Greet and a Post-Show Virtual VIP Party are also available.

The STAND UP AND SHOUT FOR RONNIE JAMES DIO’S BIRTHDAY virtual fund-raising concert will also feature exclusive archival footage from Dio’s life and long-spanning career and never-before-seen footage from Dio Cancer Fund events held in Los Angeles since 2011 when the organization began. Through musical performances and storytelling, a wide array of guests will celebrate the life of a man who deeply influenced their lives through his artistry and larger-than-life presence.

Throughout his career, Ronnie James Dio was a passionate supporter and contributor to charitable work and numerous animal charities. He was an artist who was not only well respected for his talent, but also admired and loved by his peers and fans worldwide, some of which included renowned celebrities, musicians, and prominent individuals from all walks of life.

The Ronnie James Dio Stand Up and Shout Cancer Fund (www.diocancerfund.org), dedicated to cancer prevention, research and education, has raised over $2 million in its history. The organization’s last in-person event was its 10th Anniversary Gala held at the Avalon in Hollywood in February, 2020. Its annual RIDE FOR RONNIE Motorcycle Ride and Concert and BOWL FOR RONNIE Celebrity Bowling Tournament have been temporarily suspended as the result of the Covid-19 pandemic.

The Ronnie James Dio Stand Up and Shout Cancer Fund, founded in memory of the world-renowned voice of Dio, Rainbow, Black Sabbath and Heaven & Hell, will participate in the upcoming Icons & Idols: TRILOGY Rock ‘n’ Roll Auction conducted by Julien’s Auctions live in Beverly Hills and online at www.JuliensAuctions.com on Wednesday, December 2 at 10AM Pacific time. Dozens of items of rock memorabilia, among them stage clothes, vintage music collectibles and guitars and drum heads signed by a variety of celebrities from the music world, will go on the auction block to benefit the Fund’s mission of cancer prevention, research and education.

Among the guitars being auctioned in the collection is a Limited Edition Les Paul style electric guitar by ASG that is part of a limited series of 30 featuring the artwork from the Dio band’s groundbreaking debut album Holy Diver and engraved pickup covers, inscribed with “AP/30” indicating its place in the series.

Another highlight is an actual stainless steel kitchen sink signed by the members of Tool: Maynard James Keenan, Danny Carey, Adam Jones, and Justin Chancellor. According to Warren Christensen, manager of the band and supporter of the Dio Cancer Fund, Tool members are generally reluctant to sign items to donate. However, when presented with “the kitchen sink” and a good cause, they couldn’t resist.

Also included in the collection are guitars signed by artists such as Lita Ford, Nancy Wilson of Heart, John 5, Avenged Sevenfold, Motorhead and Slash. A Jackson Chris Broderick signature model soloist electric guitar played on stage by Broderick with his band Megadeth; a Schecter Omen Solo 6 electric guitar signed by 15 musicians including Eddie Money and members of Dio, Quiet Riot, and Buckcherry, a variety of tour jackets and collections of vintage Fleetwood Mac and 1960s Beatles memorabilia will be part of the auction.

All items are available for viewing in the online catalogue. Dio Cancer Fund auction items are found on Pages 250-261.

The Ronnie James Dio Stand Up and Shout Cancer Fund was founded in memory of the legendary rock singer Ronnie James Dio, who lost his life to gastric cancer in 2010.  A privately funded 501(c)(3) charity organization dedicated to cancer prevention, research and education, the Ronnie James Dio Stand Up and Shout Cancer Fund has already raised over $2 million in its short history. Monies raised have been committed to the cancer research work of the T. J. Martell Foundation for Cancer, AIDS and Leukemia Research, the gastric cancer research unit of the M.D. Anderson Cancer Center in Houston, where Ronnie was treated for gastric cancer during the last six months of his life, and other cancer research projects. Since 2016, the Dio Cancer Fund has also committed funds to support the research of Dr. David Wong and his team at the UCLA School of Dentistry in developing a simple, non-invasive saliva test for the early detection of cancer, which is in keeping with the Fund’s mission of cancer prevention, research and education.