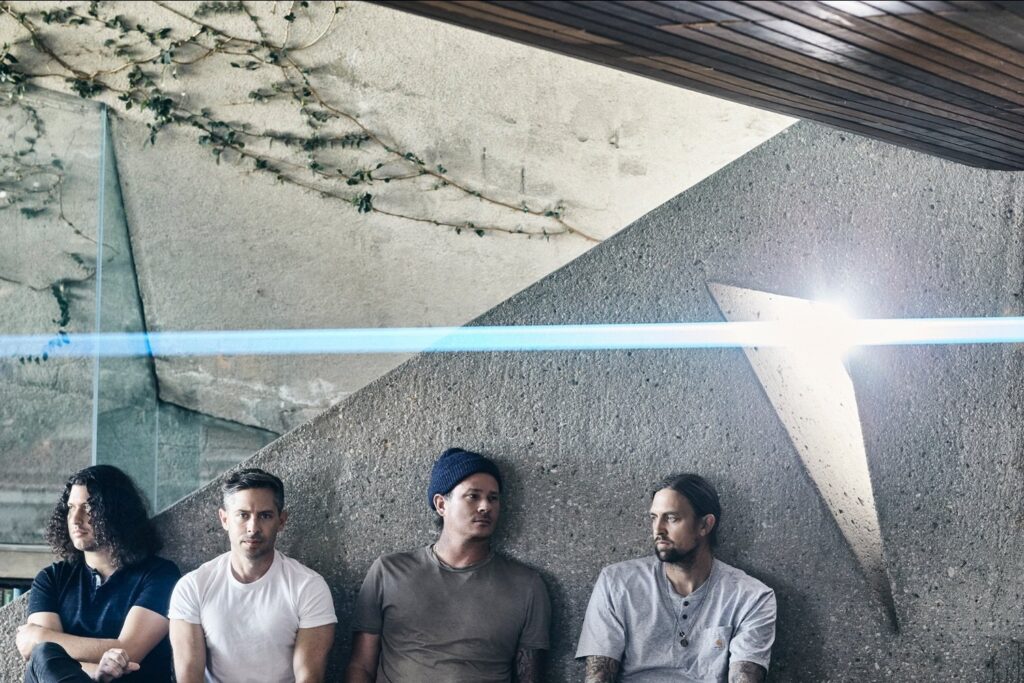 Bristling with incendiary guitars, explosive drums and spacey electronic elements, the infectious track captures the allure of an edgy romance.

To launch the single, the band activated Project Dreamland, which disseminated cassette players, tapes and evidence files to a number of fans, enabling them to unlock the countdown to today’s release of “Euphoria” via Rise Records/BMG.

The provocative official video for “Euphoria” was unveiled today in a YouTube Premiere. Angels & Airwaves’ Tom DeLonge directed, weaving a tale of intrigue complete with a femme fatale, her lover, a mysterious motorcyclist, Area 51 intelligence and a tour de force performance by the band.

“In a music world that seems to be absent guitars, angst, and emotional authenticity, I felt it was important to lead with a song that mirrors the post-hardcore days of my youth, where the power of the music creates that feeling we once had as teenagers, where we wanted to break something and change the poisonous environment within our broken homes,” explains Tom DeLonge. “These emotions create us. This song shows the seductive nature of an intense love built with that baggage from our youth, from being born into an imperfect household.”

Angels & Airwaves (AVA) – comprising Tom DeLonge (lead vocals, guitar/synths), Ilan Rubin (drums/guitar/backing vocals/synths), David Kennedy (guitar) and Matt Rubano (bass) – wrote and produced “Euphoria” with Aaron Rubin. Rich Costey (Foo Fighters, Weezer) mixed the track, which marks the first new music from the band since “All That’s Left Is Love,” which was released in April 2020. Hailed as an “empowering anthem” by SPIN, the song conveyed a message of hope amid the pandemic. Continuing the band’s longstanding relationship with Feeding America, proceeds from “All That’s Left Is Love” were donated to the non-profit’s COVID-19 relief fund.

DeLonge, a founding member of Blink-182, formed Angels & Airwaves in 2005. The band has released five full-length albums and charted numerous hits, including “The Adventure,” “The War,” “Everything’s Magic” and “Rebel Girl.” The Dream Walker, released in 2014, hit No. 1 on iTunes and No. 5 on Billboard’s Top Alternative Albums chart. A multimedia project, the album was accompanied by a graphic novel, comic books and the short film Poet Anderson, co-directed by DeLonge, which won Best Animated Short Film at the Toronto International Short Film Festival.

In addition to his work with AVA, DeLonge created To The Stars, a multimedia entertainment company that creates original content across music, film, television and publishing. DeLonge served as executive producer of The History Channel series “Unidentified: Inside America’s UFO Investigation” and will make his feature film directorial debut with the forthcoming Monsters of California.

Angels & Airwaves will perform at Lollapalooza 2021, which will take place in Chicago July 29 to August 1. The band will also play a pair of headline shows on October 23 at New York City’s Hammerstein Ballroom and November 5 at The Hollywood Palladium in Los Angeles.

The fan club ticket presale is underway now at  www.avaempireclub.com Better Noise Music [Release date 16.04.21] Escape the fate have shaken off their bad boy image and this album, ‘Chemical WarFare’ sees them reinvigorated and enthused – if you like rock n roll, I’ll be amazed if you don’t enjoy … Continue reading →

The post Album review: ESCAPE THE FATE – Chemical Warfare appeared first on Get Ready to ROCK!.

York, PA Heavy Rock Band SMALL TOWN TITANS have released the official music video for their new single, “Let Me Breathe,” the seventh single off of the band’s new album, The Ride, available NOW via AntiFragile Music. “‘Let Me Breathe’ is about facing the music, and acknowledging, as Aleksandr Solzhenitsyn so beautifully puts “…the line that separates good and evil right through every human heart.” – SMALL TOWN TITANS Track List: 1. Rufflin’ Feathers 2. The Man 3. Behind The Moon 4. Let Me Breathe 5. Universal Limits 6. 9 to 5 7. Sex And Candy 8. When It All Comes Down 9. Junkie For You (Hey Mama) 10.The Ride Click HERE to Download / Stream ‘The Ride’ Online! The Small Town Titans are an American rock n’ roll power trio from York, Pennsylvania, who love to constantly create, as well as play live. Gone is the notion that a rock band should only release 10 songs at a time every 2 years. In a world where music fans crave new content constantly, the Small Town Titans aim to deliver their brand of art all of the time, drawing inspiration from rock legends such as the Foo Fighters, Audioslave, and Deep Purple. Thanks to their efforts at taking matters into their own […]