Guitarist Ariel Posen joins the Blues Rock Show to discuss his beginnings in music, growing up in a musical family, working as a sideman, playing with the Brothers Landreth, guitar, slide, and his new album, Headway.

Ariel Posen has released a lyric video for “Heart by Heart.” The track is featured on Posen’s upcoming album, Headway, available March 5.

Most Anticipated Albums of 2021

While the pandemic has halted several albums from being released, many artists that put the brakes on releasing albums in 2020 will be releasing them in 2021. Despite the pandemic, 2020 featured a strong amount of releases, and 2021 promises to be no different.

While scheduling for releasing albums remains very fluid for some artists, here are Blues Rock Review’s most anticipated albums that could be released in 2021.

2019 was a banner year for Rival Sons.  A decade of relentless touring paid off as the band earned two Grammy nominations for Feral Roots. The album also was voted #1 on Blues Rock Review’s Top 20 Albums of 2019. The band has been in the studio working on a new album.

Eric Gales is one of the world’s most talented guitar players. Gales recently recorded an album produced by Joe Bonamassa and Josh Smith in Nashville. ‘Keb ‘Mo was also brought in to help produce vocals on the album. “Truly one of the greatest of all time. He (Eric Gales) dug deep within his soul to deliver the record of his career,” said Bonamassa about the album.

The Kenny Wayne Shepherd Band released Straight You Live in 2020 and the album was voted Blues Rock Review’s #1 Live Album of 2020. It was the followup to 2019’s highly acclaimed studio album, The Traveler. Shepherd revealed in an interview with Joe Bonamassa on Live From Nerdville that the band already recorded a new album prior to the pandemic starting, which will be highly anticipated. 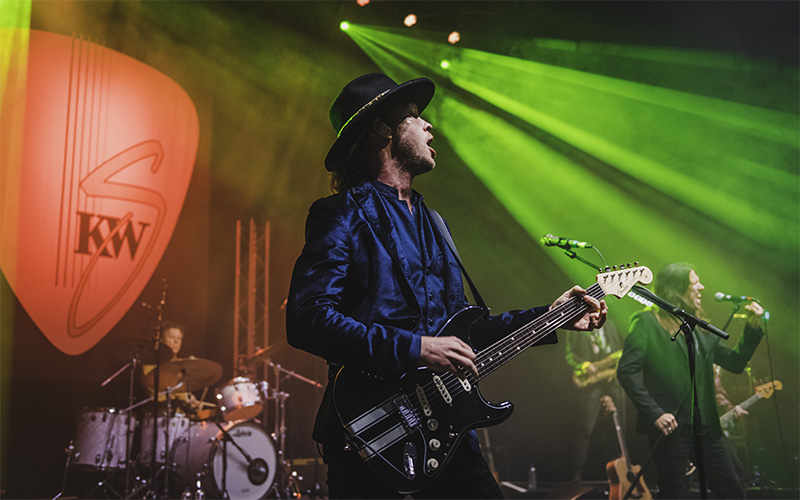 22-year-old Christone “Kingfish” Ingram blew onto the scene with his debut album, Kingfish, in 2019. Ingram stole the show at last year’s Blues Music Awards winning in five different categories, including “Album of the Year.” Ingram has a new album set to be released later this year.

South African guitar sensation Dan Patlansky has been one of the most consistent performers on the blues rock scene over the past decade. Patlansky is one of only two artists to earn Blues Rock Review’s album of the year twice (2014, 2016) along with Joe Bonamassa (2012, 2020). Patlansky hopes to release his new album by the middle of 2021.

Anthony Gomes surprised fans with Containment Blues in 2020, which was inspired by the pandemic. Prior to releasing that album, though, Gomes was already busy working on a new album called Rock and Roll Bluesman. Gomes told Blues Rock Review in a recent interview that the album is “very sassy and in your face.”

Guitarist Ariel Posen released his debut album How Long in 2019. The album was voted #10 on Blues Rock Review’s Top 20 Albums of 2019. Posen will release Headway on March 5th and has already released two singles from the album, “Carry Me Home” and “What Are We Doing Here.”

Greta Van Fleet has had the quickest rise of any blues rock band in recent memory and one of the few blues rock acts able to break into the mainstream. The band’s 2017 release, From The Fires, scored multiple hits and won the Grammy for Best Rock Album.  Greta Van Fleet will release The Battle At Garden’s Gate on April 16th.

Bluhauz is one of the best kept secrets in blues rock. Bluhauz was listed as one of Blues Rock Review’s “Artists You Should Know” in 2020. He released multiple singles in 2020 and will release his debut album in 2021.

Joanna Connor has been well known in the Chicago Blues scene for years, but 2021 should be Connor’s coming out party on a wider scale.  Connor will release 4801 South Indiana Avenue on February 26th. The album was co-produced by Joe Bonamassa and Josh Smith. Connor is known for her fiery slide guitar playing and 4801 South Indiana Avenue promises to bring her to the next level. Connor recently spoke to Blues Rock Show about the new album on the Blues Rock Show.

The post Most Anticipated Albums of 2021 appeared first on Blues Rock Review.

Ariel Posen releases “What Are We Doing Here” video

Ariel Posen has released a new music video for “What Are We Doing Here”.

“It’s a song about all the feelings, questions and doubt one may have when starting a new relationship or journey,” said Posen in a Facebook post. “It’s also my first tune with approximately 17,563 chords. Hope you dig it.”

Posen has also announced the release of a new album, Headway, available March 5.

Ariel Posen has released a music video for his new single, “Carry Me Home.” Posen co-wrote the track with Jason Gantt & Jason Nix. “Carry Me Home” was produced by Murray Pulver and Posen.