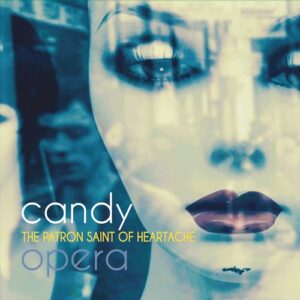 Candy Opera have recorded their first new music in nearly 30 years for 2nd album The Patron Saint of Heartache. It turns out it was worth the wait.

Band reunions can be tricky little buggers. The reasons and tensions that split the band in the first place can raise their ugly heads again, the times that they originally operated in may have moved on and the youthful fire that burned in their bellies may have dimmed.

None of this stops bands reforming though, after all, there can be huge paychecks for surfing the wave of nostalgia. But worthwhile band reformations are few and far between, and the bands in question often run the risk of ending up as their own tribute act, playing their old hits to their old fans and not looking to actually write any new material.

Then again, new albums from bands who have got back together can easily be critical misfires. One only has to think of The Verve’s Forth or Blur’s The Magic Whip for examples. But Candy Opera have managed to sidestep these pitfalls and return in style with new album The Patron Saint of Heartache.

Perhaps part of this is down to the fact that Candy Opera split when they were still a largely unknown quantity with little weight of expectation on any future plans. Their story is one of frustration and near misses, but thankfully one that ends in redemption and triumph.

The band formed way back in the heady days of 1982, creating a superior pop music that locked in with the likes of fellow Liverpudlians The Pale Fountains and Scotland’s Aztec Camera. The band quickly attracted interest and played support slots to the likes of The Pogues and appeared on Granada TV. But, as can often be the case in the world of the music business, lucky breaks were not forthcoming and Candy Opera split up in 1993, leaving only demos in their wake.

Then, many years later, a stroke of luck sent these demos into the hands of Berlin’s Firestation Records, who promptly fell in love with them. The demos were collected together for what became Candy Opera’s debut album album 45 Revolutions per Minute, which was finally released in 2018. The band reformed to promote the album, playing their first shows in over 25 years.

If this was all there was to the Candy Opera story, it would surely be enough. It all sounds like a highly unlikely film script that would end with a victorious hometown gig, freeze framing as Candy Opera take a bow after a much demanded encore in front of a smiling, sweaty crowd.

But the story does not end there at all. Their fire reignited and their creative drive restored, Candy Opera picked up where they left off and wrote their first new material in nearly three decades for their 2nd album. In another cruel twist of fate, The Patron Saint of Heartache is released in a year where they are unable to again take to the stage to support such a momentous release.

The good news is that the new album is good enough to stand on its own without a promotional tour to establish it in the hearts and minds of their fans.

The first track on the new album is single These Days Are Ours, a classic slice of epic, widescreen pop that starts with the line “All the best days of your life will pass you by in the blink of an eye“, a line made more poignant given the band’s back story. The band’s maturity shows and the song is calm, measured and heartfelt.

Next song Tell Me When The Lights Turn Green transports me back to the 80s when indie infected pop music was taking over the charts and making stars of scores of previously underground bands. Listening to it now, it is baffling why Candy Opera weren’t included in that success, there really seems to be no discernable reason why this should be denied them other than the fact that this is how life sometimes plays out.

Crash is a lively number that tells us of a girl who looks like “Venus in blue jeans” or “the devil in plaid” in lyrics that again evoke the image and tropes of 80’s pop. But, while this may sound like Candy Opera are rooted in an earlier decade, this is not the case at all. There is a contemporary feel to these songs, and a modern production to go with it.

Start All Over Again seems autobiographical, with singer Paul Malone observing “you count the days and the sleepless nights when you harbour thoughts of living a different life.” There can be little more frustrating than a band like this not having a fair bite of the cherry first time around and the music Candy Opera are currently creating has an uplifting sense of joie de vivre about it, as if the chance to get around to releasing albums has given them a sense of relief and vindication.

The pace drops for Five Senses, Four Seasons, with an acoustic guitar riff that brings to mind a Faces or Primal Scream groove, but with a more pastoral feel and closely intertwined harmonies. Real Life carries this acoustic balladeering on before Enemy kicks in with an epic intro and singalong verses that would feel perfectly at home on the world’s Festival stages, a song that demands to be sung by huge crowds of people. It is easy to imagine this song morphing into a long killer anthem when played live.

Freedom Song takes us back into acoustic territory, but with no relaxation of the epic feel. A mid set, mid tempo song that allows us to draw breath and again join in on the chorus. Hashtag Text Delete is a country tinged stomper that demonstrates perfectly Candy Opera’s knack of writing instantly catchy songs that work their way under your skin and into your subconscious. I have found myself humming along to this one more than any other since I first started listening to the album, a sure fire litmus test for a future single.

Rise (If That’s What People Want) is a modern soul song that should soundtrack a summer, complete with an uplifting and irresistible chorus and a brass section. Crazy is full of trebly tremolo guitars high in the mix and exudes an air of cool caught between the 50s, the 80s while Gimme One Last Try conjures up images of The Rolling Stones, the lack of drums making it sound almost like an improvised cry to a lost love.

An album like The Patron Saint of Heartache needs a killer song to close with, and There is No Love is more than up to the task. Another potential single, the song rolls along on a groove that captures the soul and rock roots of the band and is perhaps the song that best shows what Candy Opera’s next steps could be.

And with The Patron Saint of Heartache, we hope that there are further steps to come from Candy Opera. It may have taken them three decades to find their place at the table, but that place is well deserved.

The Patron Saint of Heartache can be bought here.