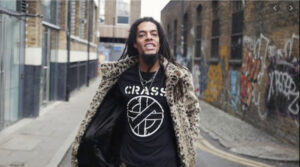 It’s no surprise that Bob Vylan’s We Live Here was voted number one in Louder Than War’s end of year poll of the top 20 tracks of 2020. We’ve followed them from the very beginning.

Their fusion of politically infused punk vs grime which we covered here back in March proved a perfectly pivoted portent for what was to come. No track better defined the tsunami that rolled through 2020. The album from which it was plucked was number 2 in the writers’ albums of the year. What better time then to interview Bobby Vylan, frontman and one half of the band!

“There’s a community of people in the punk sub culture that see punk music to it’s very core, it’s political, it’s socially engaged, it’s for the cause, whatever that cause may be, and I think with a song like We Live Here which is so obviously political and it’s an obvious social commentary, there’s no hiding it you know? I think that that audience in particular say ‘Oh there’s someone still saying something, there’s someone pissing people off.”

Bobby talks about We Live Here, the politics and motivation behind the track, the mash-up of grime meets punk and the Millennium Falcon in Lego! Watch the full interview here:

The Top 20 Louder Than War run down is live on Radio Alty tonight at 9pm featuring interview snippets from Bobby Vylan and Ben Corry from The Battery Farm! Here: https://www.radioalty.co.uk/nigel-carr-louder-than-war.html

Intro by Nigel Carr. More writing by Nigel on Louder Than War can be found in his Author’s archive. You can find Nigel on Twitter and Facebook Listen to Nigel’s show on Radio Alty – Wednesdays 9-11 pm!