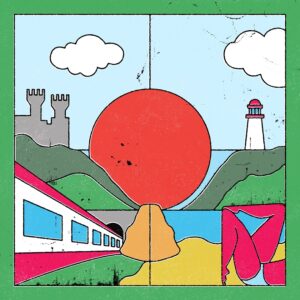 Blanketman are back to prove that slogging the Manchester underground circuit across the tiny venues really does set you up for the kind of fans who listen to the underground and keep the faith. They release their debut EP on PIAS and it’s a massive step up from their moody gritty early days of Joy Division comparisons reckons Wayne AF Carey…

Blanketman are no strangers in Manchester. Having gigged like fuck around town, being on posters for many small independent gigs in our grassroot venues and landing support slots with Brix & The Extricated to boot, they’ve worked hard and never given up during these shitty times. I first caught them at The Ruby Lounge supporting Brix back in 2018 (review here) and instantly knew there was something going on. Adam Hopper with his uncanny resemblance to Ian Curtis and the early gritty sound was enough to start comparisons yet something was different. Check out the early sound of Sick And Tired here with the post punk psych of industrial Manchester all over it. The band have grown in stature and sound with this excellent new EP which is more of a mini album to be honest. Adam Hopper explains lead track Leave The South…

“The song harks back to five years ago when I was living in Reading while at uni. While not a bad place, I found my final year tough and was becoming disillusioned with what I was doing and where I was. I was in a rut mentally and my friends had stayed up north and I found myself feeling increasingly isolated and skint. I managed to convince myself that moving back up North would solve all my problems like it was some kind of utopia and started blaming where I was for said problems. I laugh at that now and that’s what the song is about. Although the water really does taste better up North…”

Beach Body is a pleasure to hear, a great bass line and an infectious sing along that totally lifts the mood. They’ve gone punk pop and left in the wonk with a genuine anthem that does the trick. Leave The South lifts a bit of Mondays with that funky drumbeat and the disjointed jangle of Mark Day’s guitar. Wonk pop anyone? Harold has that repetitive moody sound that has always made Blanketman stand out live. Hopper has a bit of Syd Barrett going on in his vocals and the sound is like a lovely psychedelic melt of moody bliss not unlike Heavy Salad’s debut.

Highlight for me is the brilliant Dogs Die In Hot Cars. A great little C86 moment here with a splash of Frank And Walters. The chorus is catchy as fuck, “Wind down your window” will be the festival chant this year. A simple yet great line and a perfect chorus. Blue Funk rolls in with a great bass line that Hanley would be proud of. The gigs with Brix have definitely give the band an edge when it comes to writing summery indie punk classics that cement a place in your head. The funk is in there yet it’s definitely not blue. National Trust just rolls in like a Buzzcocks hit. A killer bassline with great guitars, funky as fuck drums and the now trademark vocal of Adam Hopper. Brilliant. The Tie is a great closer with strains of early Talking Heads going on yet sounding like some of the great early 90’s classics. Short and sweet with that Manc buzz resonating throughout.

All in all a cracking debut EP from one of the hardest grafters on the scene (when we had it) They’ve lifted the mood totally from their humble beginnings to craft some clever songs that will stick in your head and leave you wanting more. A great effort from a great band.