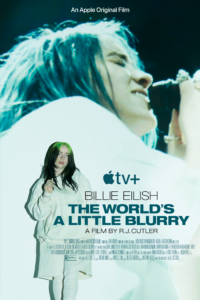 Documentaries about pop stars are rarely good. Most of the time they feel like little more than promotional material; something to keep them in fans’ minds in-between album cycles. R.J. Cutler’s new film The World’s A Little Blurry is an exception to that rule – if only because the pop star it examines feels like an exception herself. While opinions on Billie Eilish and her music remain divisive, there’s no denying that she’s been a breath of fresh air in the music world.

Her first album When We All Fall Asleep, Where Do We Go? managed to carve out its own sound while also taking inspiration from familiar places. Building off the moodiness of other pop stars such as Lorde, while also pulling influence from other genres such as trap, it felt like the push forward that pop music needed. It’s impressive just how huge the album was as well, catapulting Eilish to an inescapable level of fame.

Even more refreshing was the way the album was produced. In a world where it feels like most pop songs have ten different writers and producers, every song on the album was written and produced by Billie and her brother Finneas. And in his childhood bedroom, no less. This all provides The World’s A Little Blurry with enough material to work with to help it stand out from other music documentaries. In it, Cutler documents Eilish’s rise to fame from the production process of that album all the way up to its sweep at the Grammy Awards last year.

It’s fascinating to see the behind-the-scenes process of the album’s making, stripping away much of the mystique around music production. It’s humbling, in its own strange way, to know that the album was almost exclusively recorded in a bedroom with a computer, microphone, and few instruments. The duo’s minimalist approach to production is shown best by their process for No Time To Die, Eilish’s theme for the ever-delayed James Bond film, which she and her brother managed to bash out over a few days while on tour.

The primary focus of the album though is Billie Eilish’s fame and all the weight that comes with it. It’s surprising how unattractively Cutler chooses to portray it, with Eilish constantly being weighed down by the pressure of her fans and her fear of letting them down. It’s a huge amount of pressure for anyone – let alone a teenager.

At times it seems like the film is making a bigger statement about young pop stars and, well, just how much is okay? Justin Bieber – Eilish’s childhood idol – pops up in the film several times, and it’s hard not to draw a parallel between the two of them. Though the film ends things on a positive note, it does leave you with a weighing sense of anxiety about the film’s star.

If you’re not a fan of Eilish’s music, The World’s a Little Blurry probably won’t change your mind, but at the very least it’ll help you understand the phenomenon a bit more. It works because it doesn’t just feel like something for the fans, more a dissection of what it means to be a pop star in the modern world. While it is a little bloated at two and a half hours, it’s definitely worth checking out.