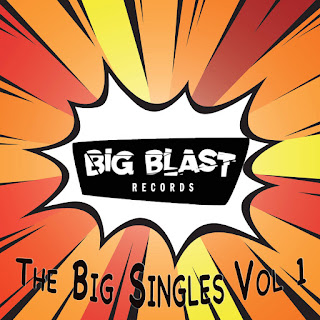 Today I’m featuring a really cool label out of Chicago that you ought to check out if you haven’t done so already. Big Blast Records describes itself as a “Chicago based community record label bringing you sticky, hooky, crunchy, smart, big guitar melodic rock and roll”. Well there you go – that sure sounds like a label I’d be into! It’s hard to go wrong when you work a love for Cheap Trick and Material Issue into the ideology of your label!

I recently featured one of Big Blast’s bands, Golden Richards. Joining Golden Richards on the Big Blast roster are The Bishops Daredevil Stunt Club, The Glad Machine, Mark Watson Band, The Peeves, and the legendary Phil Angotti. All of these artists are a little different, but they all share a similar vision for hooky guitar rock. The Big Singles Vol. 1 is the perfect showcase for Big Blast’s collection of talent. It conveniently compiles new singles from all of the label’s artists onto one nifty digital EP. Golden Richards, fresh off their new wave-ish pop gem “Borg Vs. McEnroe”, take a more modern power pop approach on the punchy and melodious “Honey West Kung Fu”. The song references the first female TV private eye as metaphor in a tale of a couple guys encountering the girl of their dreams in the middle of the summer. Man, it doesn’t get any more “power pop” than that! “When Two Still Feels Alone” by the Mark Watson Band brings a crunchy power pop/alternative sound that practically screams “90s” while delivering an absolutely HUGE chorus. On the louder side of things, The Bishops Daredevil Stunt Club tear into “X Play”, a guitar heavy big hook rocker that ought to be coming soon to an arena near you. The Peeves come on with a punkier pop sound on the very catchy “Radio”, while the The Glad Machine’s “Slow Motion July” is more in a laidback indie pop vein with melodies for days. It’s not often that a single can get away with a running time exceeding five minutes. But “Slow Motion July” builds by degrees and never bores. It’s the textbook definition of a well-crafted pop song. Last but not least, Phil Angotti turns out a wonderfully charming Beatles-inspired number called “The Lamp”.
The Big Singles Vol. 1 serves as a perfect introduction to Big Blast Records. Just as importantly, it’s a huge treat for fans of power pop, loud pop, hooky rock and roll, or whatever you wanna call it. All of the tracks would (and do) stand alone as singles. But it’s kind of neat to have them compiled together like this. If you like what you hear, be sure to give Big Blast a like on Facebook so you can stay up to date on all future releases. You know I’ll be having a lot more to say about Big Blast in the very near future!
-L.R.
https://bigblastrecords.bandcamp.com/album/the-big-singles-vol-1
https://www.facebook.com/bigblastrecordsrocks/