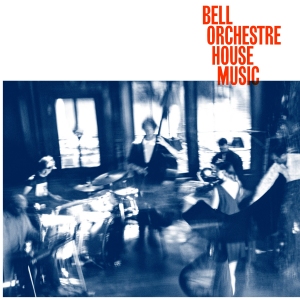 Created almost entirely from one single improvisational session, Bell Orchestre’s House Music is the most innovative and captivating body of work imaginable. It’s a journey that will propel you skywards before gently laying you down again. Gordon Rutherford reviews for Louder Than War.

Please fasten your seatbelts. We are about to take off and it’s going to get wild. Summoning the spirit of Hawkwind’s Silver Machine, the opening bars of Bell Orchestre’s House Music evoke images of a plane accelerating down the runway, engines firing on all cylinders. And then we are up, soaring into fluffy cumulus. And relax. Or maybe not.

You may come for Arcade Fire, but you will stay for the sheer thrill of the ride. Like Passerine Finale, last year’s solo release from fellow Arcade Fire member Jeremy Gara (which I also reviewed for Louder Than War), House Music is pretty far removed from AF territory.

Let’s deal with the Arcade Fire thing before going any further. Bell Orchestre are a six-piece operating out of Montreal. One-third of the band – namely Sarah Neufeld and Richard Reed Parry – also happen to be members of Arcade Fire. Interesting fact: Bell Orchestre recorded their debut album in 2003 at the same time, and in the same studio, as Arcade Fire recorded their debut, Funeral. The connection ends there – almost. Anyone who has seen Arcade Fire live will testify to the sheer visceral, raw energy of their performances. It is often quite chaotic at points, but it’s a beautiful, almost choreographed, chaos. Similarly, Bell Orchestre’s House Music exists in that space, continually gravitating somewhere between genius and chaos.

House Music is Bell Orchestre’s third album and comes a full twelve years after its predecessor, As Seen Through Windows. It’s been worth waiting for. Released on the consistently brilliant Erased Tapes label, it is an album comprising ten tracks, all of which collide into each other. One segues seamlessly into the next and then again, into the following. No pause for breath. Zero caesura. That’s because the music comes from one single improvisational session. Ten tracks, but recorded in one shot; recorded live, then sculpted in production. Just listen to the tracks flowing gracefully like the Danube in springtime, and it’s apparent that this is one body of work. Despite that, you could pick off individual tracks, listen to them as stand-alone pieces and they make perfect sense. Check the video for Movement at the end of this piece for evidence of that.

But that’s not all. Not only was the album recorded in one session, but it was also largely improvised. The group recounted past experiences when they would jam together. Something great would emerge but would be lost in the mists of time as nobody had thought to capture it. Not this time. Influenced by artists like Miles Davis, who would notoriously go into the studio with no music written down and expect his band members to improvise around themes, Bell Orchestre decided to do likewise. Just innovate and improvise. Experiment and see what emerges.

Equally fascinating is the recording process. Rather than use a conventional studio, the band wired up every corner of Sarah Neufeld’s rural Vermont house. Neufeld describes it as follows: “If you sliced away the front of the house and looked in, you’d see the horn section down in the first floor of what would normally be the living room. Then you travel up a floor and there’s me and Richie in an empty bedroom. Mike was on pedal steel in the bathroom. And then up the stairs in the attic was Stefan, alone on drums.” So, pretty unconventional. Given all of that – the recording process, the absolute spontaneity of the improvisation, the ‘one-take’ approach – the end product is a quite stunning achievement.

The starting point, because there has to be a starting point no matter how fluid the improvisation, was a short harmonic loop that Parry had brought in. This hypnotic call is (virtually) omnipresent throughout, sometimes more prominent, sometimes less. But always there. You can hear it even when you can’t hear it.

At the top of this piece, I referred to the sensation of ‘take off’, jet engines screaming as they propel us into celestial blue skies. Holistically, the individual pieces come together to give the impression of a journey; one that begins with that supersonic take off. The first half of that journey is where the chaos lives. It’s utterly frantic. On the second track, House, Neufeld’s violin is discordant as it rises above the percussive pandemonium that encircles her. The outstanding Dark Steel follows. It’s a labyrinthine piece of music that sounds like the soundtrack to Robert Burns’s Tam O’Shanter. Fiddles spin a reel for the danse macabre. In the distance, Kaveh Nabatian’s trumpet soars, issuing a clarion call. As the track unfolds, Nabatian’s instrument shifts, now sounding like something from an epic Morricone soundtrack. It’s so disordered that it shouldn’t work. But it’s the most beautiful form of pandemonium imaginable.

What You’re Thinking sees the band step off the gas, but just a little. Stefan Schneider’s drums lead the way here as he rolls on the tom-toms, laying down an incredible pattern. Neufeld’s violin slashes out a frenzied line while kalimbas beat out melodically. Michael Feurstack’s pedal steel rings above it all and, somewhere, a gongoma is picked exquisitely. We are still on a journey, but now it feels like the coast-to-coast express train, racing from Vancouver to Nova Scotia across that vast nation, rhythmically pulsing out a beat on the rails whilst all of the associated cacophony goes on around about.

When Movement begins with Parry’s throbbing double bass over his loop, it is evident that we are moving to a lighter phase, drawing back from the abyss. Here, Nabatian’s trumpet sings and Feuerstack’s pedal steel rings. Pietro Amato’s French horn subtly supplies heft. The band members provide a heavenly choir of voices, clearly signifying that we are in different territory now.

All The Time centres around Schneider. He’s in charge, dominating the toms and masterfully riding the cymbals. Colour Fields follows and is jazzy and melodic. It has a spring-like feel, as the instruments dance around each other like newborn lambs before Amato takes centre stage again with that French horn. Making Time is equally light and airy. Halfway through, the harmonic voices return, accompanied by what sounds like heavy breathing. It serves as a reminder that we are not quite out of the woods yet.
By the time we come to Nature That’s It That’s All, we are firmly in ambient territory. In stark contrast to all of the earlier cacophony, this is a hypnotic, mesmerising sound, one that is rich in mellifluousness. Final track, Closing, does what it says on the tin. In the same way that Good Night brings the perfect conclusion to The Beatles’ White Album, this track ends it all quite sublimely.

And that’s it. The end of a remarkable journey. House Music is an album of quite extraordinary musicianship. As a vision, it is incredibly ambitious and you will find fewer releases this year that are more innovative in terms of their composition and recording process. When you get to the end and reflect on the fact that the vast majority of the album is laid down almost entirely from one single improvisational session, it kinda blows your mind. In a time when it is virtually impossible to embark upon adventures, Bell Orchestre’s House Music offers up a vivid and enthralling journey. So, strap yourself in and enjoy.