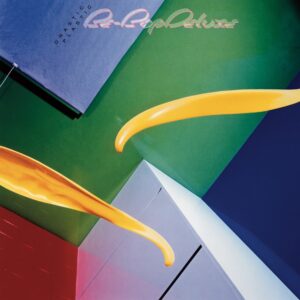 2CD reissue of the final Be Bop Deluxe album from 1978, presented in both the original stereo version and a brand new mix, along with 14 bonus tracks. The album is also being made available in a deluxe (sic) six-disc limited edition, with 4CDs and 2DVDs. Ian Canty probes the final works of Bill’s Be Bop…

In an almost undercover fashion, Bill Nelson and Be Bop Deluxe glided through the rules of Year Zero like they did not exist. With some incredible sleight of hand, he/they managed this enviable feat, something only a few pre-punk acts managed to achieve. If I were to hazard a wild guess into exactly how this was done, I would say that Nelson/Be Bop were helped by the fact they continually updated their outlook and sound. The band were tireless in their pursuit of the new and, for the most part, rounded off any excesses with an irresistible infectiousness that few of their contemporaries could aspire to. They also endowed their sometimes challenging material with an accessible, no-nonsense rhythmic base. They were as tight as a gnat’s chuff, to coin a phrase and this gave Bill a solid framework on which to fire off his full range of unorthodox and often revolutionary ideas.

By the time of Drastic Plastic’s release, however, it appears that Nelson began to feel uncomfortable with how Be Bop Deluxe were perceived and wanted them to move forward in the much-changed world of 1978. In the run-up to the recording of Drastic Plastic, punk was happening and his outlook was not that far removed from the young hellions. He apparently wanted to split the band after the Modern Music LP, as he felt stifled by the complacent attitude that was rife in the music business. As ever with his ear to the ground, he was aware of these massive changes that were percolating and the new mood that prevailed. He wanted to be in on this new flush of experimentation and not merely seen as a rock ‘n’ roll antique or cash cow for the record label.

Nelson relented after much soul-searching and persuasion, but this feeling would intensify as things went on and ultimately lead to Be Bop Deluxe ending not long after Drastic Plastic. It might be said the album was a dry run for Bill Nelson’s Red Noise, but it clearly has such merit of its own that it deserves separate recognition.

He may have been conflicted at the time, but Drastic Plastic feels like he was genuinely seeking to reposition Be Bop as a viable concern in the wake of post-punk. It could even be said that this process began back on previous album Modern Music, which just goes to show how far Nelson was ahead of things. Having no fear of technology or the new influx of talent that was dramatically rearranging UK music set him in good stead and this final version of Be Bop Deluxe sound at least up to the task of moving on up into the future.

The band duly assembled in the early summer of punk at the Chateau Saint Georges studio in France, in order to record their new material. It seems a trifle odd that such a lush setting (Bill calls it idyllic in the sleeve note) was used as the background for putting down on tape the album’s mainly edgy material, but that’s how it was.

Opening track Electrical Language sets out their stall with some weird but catchy modern pop music. It still sounds fresh now with alternate guitar thrashes/gleams and synthesiser flutters. This forms a neat and unique beginning to the record and presents the band as recast anew for the late 70s. Then follows New Precision’s guitar growls and watery keyboards, which forms part of a very accessible sound that gives Bill a chance to blast off some of his show-stopping guitars runs. Third track New Mysteries has a classic Be Bop intro and then goes into a chilly, almost funky rhythm, which has echoes of Bowie’s Berlin trilogy.

Piano leads the way on Surreal Estate, which shuffles along otherwise in stately fashion, right up to a gloriously realised chorus. This is a packed production which seems almost like a look back to psychedelia, but is really charming and doesn’t stick out like a sore thumb, ending with a whimsical note with Whistle While You Work. Definitely odd and the punky thrash of Love In Flames that comes hammering in straight afterwards gives the listener some idea of the variety to expect contained among Drastic Plastic’s grooves. This number is furnished with a Farfisa organ that strengthens the ties back to the garageland of punk’s 1960s roots.

Next comes Panic In The World, which a good choice for the first single from the LP. It failed to hit the charts, but is really tuneful and has a kind of Velvet Underground drive to it which would have fitted into the UK hit parade of early 1978 well. Dangerous Stranger is stop/start Buddy Holly fed through the new wave, choppy chords and a decidedly arch delivery, think a punky 10CC with skinny ties and you’re in the right neighbourhood.

Superenigmatix (Lethal Appliances For The Home With Everything) is a great title and a hyperactive rhythm that appears to be right on the exact spot where art rock and post-punk meet. It is where urgent Wire-esque verses give way to more expansive keyboard sections and vice versa. This song segues into the short reflective guitar meditation Visions Of Endless Hopes, which gives the listener a chance to take a breath after a raft of more upbeat and powerful thumpers. Perhaps the most throwaway track on the album, it does however provide a necessary buffer. Possession then kicks things into gear again, there’s more great guitar work and bundles of energy on this tune, one that builds from a basic start into something brilliant.

Final track Islands Of The Dead is a wistful ballad and a strangely low-key but tuneful way for Be Bop Deluxe to go out on. With Drastic Plastic the band managed to provide a fine collection full of adventure and above all some cracking melodies too. It is a shame that they finished so soon afterwards, but, given the circumstances, it appears an inevitability.

On disc one, we have 9 bonus tracks. The first two of these come from the Japan/Futurist Manifesto single, the release of which preceded Drastic Plastic in the summer of 1977. The former makes such good use of synth that it is virtually a forerunner of electropop and taken with Futurist Manifesto’s mix of piano chords, synths and spoken words, must have bamboozled a few long term fans. The more easy-going melodic pop/rock of Blues Is The Jewel was the flipside of Panic In The World and is an ace tune that may have been wasted as a b side.

The final section of this disc presents six songs recorded at the same time as Drastic Plastic, for an EP which in the end never surfaced. Though all have their positives, the picks for me were the classy Speed Of The Wind, which begins with a guitar and vocal intro and then has a rum but pleasing excursion to a near-reggae rhythm, plus the sad and anthemic Lovers Are Mortal. Having said that, Blimps, a menacing drone mood piece, was a sign of things to come.

Disc two has the new stereo mix of Drastic Plastic. I know it is sacrilege to say but it does sound just a touch crisper. I think good work has been done and having both mixes means if you remember it better as it was, you do not miss out. Bonus tracks on this disc are the single edits of Panic In The World, Electrical Language and Love In Flames, plus two previously unreleased offerings in Take 4 of Islands Of The Dead and The Saxophonist. The latter is a reflective jazz instrumental that is totally unlike anything else on this set, but it is nice and gives Bill ample opportunity to display his guitar chops outside of the rock ‘n’ roll sphere.

Though Drastic Plastic was in effect the sound of a band without a future, what an alive and enthralling picture they painted in their death throes. This new 2CD set does the record justice and the new stereo mix gives one further insight. Added to this, the detailed sleeve note in the accompanying booklet from Bill Nelson himself puts you right at the heart of the action. Esoteric have done sound work on their Be Bop Deluxe reissue campaign and this final instalment is right up to the high standard they have set.