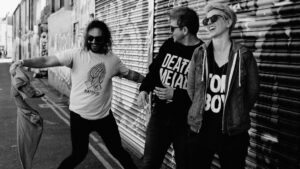 With a defined garage-rock sound combined with Smashing Pumpkins and Serafin characteristics, You’ll Be Fine flips a punky two fingers to growing up. With their name acting as a comedic and ironic response to ‘bad pop’ music you probably/definitely hear every day, it is no secret that Bad Pop do not fall into that category.

“You’ll be Fine” was the first song written for (upcoming EP) Dark Metal. The song evolved from an older tune that we use to play live, before the pandemic. I wanted to write a song in the vein of Supergrass’s Alright,” begins frontman Chris Connelly. “A fun/nostalgic rocker that hearkens back to being young, carefree, going to shows and feeling invincible. It’s a fun, whimsical journey that pulls you in with a loose jangle only to abruptly shift gears and turn to tragedy in the end”

By moving from their glam-rock/T-Rex inspired track Destructo, to a heavier Song 2 approach with Grey Area, this 90s grunge-inspired track showcases the band’s versatility before they drop the musical bomb that is their forthcoming EP.

“Because the song is about being young and going out, I wanted it to feel like a dance-y kind of indie rock song, because those were the places I used to go to when I was younger- indie/rock/dance/party kind of nights. This is a track that we recorded all in person. In Toronto. We did a fun/ridiculous thing where both me, and Devon took turns soloing over the entire song, then we pieced together the bits we liked best. There’s basically a jammy solo going on throughout the entire song”

All words by Jasmine Hodge. More writing by Jasmine can be found in her author’s archive. Jasmine is also on Twitter as @ObviouslyItsJaz