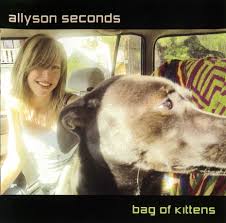 Reissue of the debut album by Sacramento-based singer Allyson Seconds, which was originally released in 2009. Bag Of Kittens is a set of songs written by Anton Barbeau, who also helps out on various instruments and vocals. Also lending a hand is Kimberley Rew of Soft Boys and Katrina And The Waves fame…LTW’s Ian Canty makes sure that every seconds counts…

Noted photographer Allyson Seconds, wife of hardcore punk legend Kevin Seconds, originally began her singing career as a backing vocalist, working with cult act The Groovie Ghoulies among others. But she got her start in her own right with this album Bag Of Kittens, originally released on the Transistor label back in 2009. A long way sound-wise from husband Kevin’s 7 Seconds (try saying that quickly), she recorded this LP pretty much as a duo alongside the very talented Anton Barbeau, who wrote all the songs. He helps out on the instrumental side and his unmistakable voice features clearly in duet with Allyson on the song If I Could Bring You Trouble.

His somewhat oddball way of looking at life comes through in the lyrics too, but they are given an extra boost by Allyson’s interpretation. Her voice is just perfect for these finely constructed Anton Barbeau creations, teasing the strange and heartfelt out of them with real brio. The musical arrangements are ornately designed and provide the perfect platform Allyson’s voice. This sonic landscape is sometimes sparse and frequently understated, but the brief surges of power are all the more effective for being hand in hand with this restraint.

After the brief studio chatter of I’ll Do The Straight Line and we’re into Bag Of Kittens proper with the clicking rhythm track and keyboard-driven sultry allure of I Used To Say Your Name. Next song On A Bicycle Built For Bicycle 9 has a percussive build up and sinewy bassline which pleased my earholes and when the guitar fuzz bursts through, it is really thrilling and highly enjoyable.

Then we listeners are then faded into to the country/folk pop style of Boat Called Home. This is a great example of Allyson’s strengths as a singer, she’s both charming and icily cool, immediately making me feel in her confidence while she perfectly rides the song’s warm organ riff.

Obviously Love has a positive swagger to its beat, making it sound just irrepressible and groovy atop a glistening guitar jangle. Some prime bluesy piano is also buried in what is a deep and thoughtful mix. A slow, soul-tinged number Put Your Finger On Me follows, breathy and sparse until a dirty guitar and queasy wobbles emerge. But the tune always follows its own stealthy progress and reveals in itself a tense beauty.

The aforementioned If I Could Bring Your Trouble is a classic bit of Anton Barbeau folk/psych. It’s great how he sees the other side of things, in this case love as a curse rather than a blessing. His voice works so well with Allyson I could not help but wish they had paired up more than once on the album vocally.

Sawing synth and heavenly guitar herald Dig My Pig, where Allyson’s voice soars right off into the stars. Next comes I’m Just A Country Girl, beginning with whirling electronics before launching into a good-natured hoedown of a country pop song where Ally simply declares she’s “just a country girl from downtown Sacramento”. Some wonderfully out of tune whistling adds another layer this one’s batty charm.

The brief On A Sunny Day In Summer is a more standard, but still delightful, indie pop jangle. Once again Anton’s wild ideas shine brightly in the musical landscape, making the journey unpredictable but bright and pleasing. Tie My Laces, a slow burning effort, has some great electric piano which helps evoke the song’s mysterious, heady atmosphere.

Title track Bag Of Kittens comes next, slight psychedelics come in to a solid rhythmic base and again Allyson beguiles vocally. She always sounds at ease here, in control but exposing a vulnerability which is truly engaging. After One More Time breaks down in giggles, final offering Wyndeblown arrives. Very pretty and pretty epic sounding, this acoustic pop jewel furnishes us with a fitting ending to what is a fine weird pop record. Along the way there were many memorable moments that stayed with me long after listening.

Big Stir deserve a great deal of praise for rescuing this near-forgotten gem from obscurity. Bag Of Kittens is a fair distance away from the standard power pop style that the less clued-in observer might have been expecting, but it is all the better for it. Touching on electronica, folk and country rock in the imaginative musical arrangements, it all works as an excellent combination of sound without losing the personality Allyson’s golden tones provide. Allyson Seconds made another LP with Anton called Little World in 2016, even calling in XTC’s Colin Moulding to help out. One hopes she is cooking up something new at the moment, because Bag Of Kittens stands as ample evidence of a real talent.