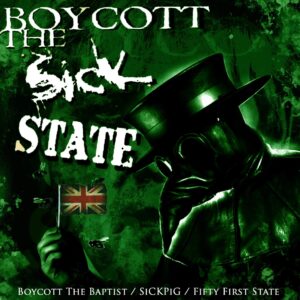 51st State, the 2-piece drums and bass punks from South West England have announced a new release; a three way split with Boycott The Baptist, and SiCKPIG; currently available as a download, however a vinyl edition is currently in manufacture.

The release follows the 2019 10″ self titled EP released via Grow Your Own Records.

The band who describe themselves as an “anarcho-Punk two piece” have been going for 13 years, during which time they have released 7 CDS and been all over the country, playing hundreds of gigs supporting everyone from Attila the Stockbroker and TV Smith to English Dogs, Sick on the Bus, GBH, Firepit Collection, Pressgang, 2 Sick Monkeys, Star Fucking Hipsters, Brain Dead, Kapykarti, Sickpig, Po-lice, Primeval Soup, Hacksaw and Hater UK.

A video for the track ‘Intelligent Advert’ has been created, the song is primarily about personalised online adverts and our developing relationship with the internet.

The post 51st State announce 3-way split with Boycott The Baptist and SiCKPIG – watch the video here: appeared first on Louder Than War.