2021 marks the 40th anniversary of the release of The Raincoats’ second album Odyshape. From post-punk to experimental, The Raincoats have been assigned various labels but ultimately defy categorization. At the time of its release in 1981, Odyshape, too, gloriously flouted genre classifications. Through this record and across the years that followed, The Raincoats developed their own taxonomy yet continually broke through even those boundaries to forge new ground. The sounds of Ana da Silva’s and Gina Birch’s voices, and their distinctive ways of writing, connect each of The Raincoats albums. Yet each record also crafts a new sonic universe, and Odyshape is no different. 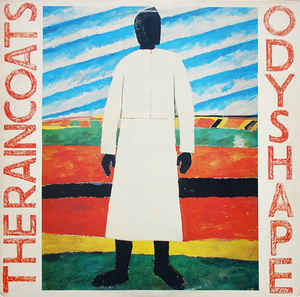 “I’m a little nervous to talk to you because I’m a bit starstruck,” I tell Ana earlier this year as we begin chatting over Zoom. Ana laughs, but I mean it. The Raincoats, and so many of Ana’s songs, taught me that women can be incredible, experimental musicians who play dazzlingly with sound while taking joy in their art. My own introduction to The Raincoats came via a used copy of The Kitchen Tapes, a live album released on ROIR, and falling in love with the song Shouting Out Loud. That song appears for the first time on Odyshape. So I ask Ana about the origins of Odyshape and its unique timbre. “We like to push ourselves in our lives,” Ana says. “You know,” she said, “Gina is painting now, and I started making electronic music when I was nearly 70 … I got into this new thing that years ago I wouldn’t have thought I’d be able to do. But it’s like everything: not as complicated as you think, and although there’s a lot to learn, you keep learning. I say this because it’s a similar impulse that led to Odyshape. We wanted to push ourselves, so when we made our second album, we weren’t going to make a sequel to the first. We wanted to do something different.”

Odyshape is so distinctive. It’s extraordinary within the universe of vinyl sounds, but it’s also incomparable within The Raincoats canon. It sounds cliché, but the album gives the impression of being recent no matter when you sit down to listen. And if you’re wondering from where those new notes arose, the answer lies in part in Manhattan at a bygone musical emporium. Beyond wanting to push themselves, the band discovered new instruments while on tour in New York City. “We went to this little shop there, Manny’s,” Ana recalls, “and it had instruments from all over the world.” Manny’s Music was a Midtown institution on West 48th Street, and it supplied musicians for nearly seventy-five years, from 1935 until its closure in 2009. “I bought a few little things there,” Ana says and laughs, “and Gina bought a balafon. We had all of these new instruments, so of course, we wanted to use them!” In addition to that balafon, which is a West African percussion instrument, the album also featured the sounds of a kalimba, as well as a shruti box and a shehnai from the Indian subcontinent.

Back in London, the band also had a lineup change that influenced the prototypical atmosphere of Odyshape. When Ana and Gina started collaborating on the tracks that would ultimately become their second album, they were officially without a drummer. As they sat in Gina’s flat to begin writing songs, that limitation “opened up a lot of space.” She, Gina, and Vicky “liked listening to just two or three instruments without the need to have all instruments going at the same time.”

Of course, they ultimately needed to find a percussionist to record the album. “We ended up asking Richard Dudanski if he’d play drums since he was Gina’s neighbour, and later Charles Hayward,” Ana laughs as she points out that both drummers “already belonged to other bands, so The Raincoats couldn’t take them!” But she loved their drumming. Richard Dudanski was a member of PiL at the time and previously played with Joe Strummer in the 101ers. Charles Hayward was with This Heat during the writing of Odyshape and later formed the trio Camberwell Now. Playing Odyshape live, ultimately with Charles on drums, was a different kind of experience than performing the songs from the first album on stage. “Both were new things,” Ana told me, “but playing the songs on the second album was a different new thing.”

I wondered about Ana’s musical inspirations as she was writing some of the tracks on Odyshape, and I was surprised at her ultimate answer. Although she and Gina “think similarly – politically, socially, musically sometimes,” Ana says, she describes them as “very different people with very different musical tastes.” Ana attributes some of that variance to their age difference. “I’m a little older than Gina, so I have a different musical point of view,” she tells me. “When we first got together, and even when we were making the second album, some of my biggest influences were the Beatles, Bob Dylan, and Patti Smith, while Gina was listening to a lot of reggae and jazz, partly because she was living so close to Richard [Dudanski]. He had a lot of reggae and jazz records to share,” Ana recalls. If you’re wondering how Ana’s and Gina’s diverse interests came together for an album like Odyshape, Ana notes that they “wrote the lyrics separately but made songs together.”

I’m surprised that Ana cites the Beatles as an influence and point to my ukuleles in the background before recounting a fourth-hand story about George Harrison. According to Tom Petty, George loved ukuleles and, after insisting he leave a few of the instruments at Tom’s home one day, told Tom he always made sure to keep a few spares in his car at any given time because you never know when you might need a ukulele. “Is that also a sitar back there?” Ana asks me, pointing into the computer camera toward the back corner of my home office. I tell her it is and talk about my earlier years playing the violin. We end up chatting for a few minutes about various string instruments tuned to different intervals. “If you had been a bit older,” Ana laughs, “you could have joined The Raincoats!”

Well, that’s the pinnacle for me — now I can die happy! I thought that moment was as good a time as any to ask Ana about the first time she met Kurt Cobain. If you’re a fan of The Raincoats or Nirvana, you’ve probably read something at some point about Kurt Cobain meeting up with Ana da Silva in London in the early 1990s. Here’s how it actually went down:

“He tracked me down. I was working in my cousin’s shop near Rough Trade, and he’d gone into Rough Trade and asked if they had any copies of the first album because his copy was worn out. They didn’t have any, but the person working at the time told him something like, Ana works really close to here, so you could stop over there and ask her if she’s got one. So he came to my shop. I didn’t know who he was, of course, but he was starstruck, like you!” Ana laughs as she recounts the story.

“I think he felt that he might have been invading my space, or he seemed to worry he was. He came in with Courtney [Love], who was pregnant at the time. He said he was such a big fan and that he didn’t have a good copy of the first Raincoats record and asked if I had any. I told him I’d check but didn’t think I had one. We didn’t really have lots of copies or anything like that lying around, but I stopped into Rough Trade later on that day and heard they’d sent him over to me. That’s when I realised who he was, but I didn’t even know his music at that point. I’d seen the poster [for Nevermind] around — that kind of caught my attention with the dollar bill. So I got the record to see what it was like, and I really liked it. I ended up finding him a copy of our first record, and I got the others to sign it and put some drawings in there. So when we re-released the album on CD, we asked him to do the liner notes.”

Rough Trade originally released The Raincoats self-titled first album and Odyshape in 1979 and 1981 respectively, and Ana has happy memories of the shop. “It was a place to go on Saturdays, and people would just hang out there. When Geoff [Travis] was interested in doing an album with us, we thought oh my god. It was amazing that he wanted to do it, and then all of a sudden we had contracts. The Rough Trade contracts — five-year contracts — were so much different from the contracts with big record companies where the contract is for life and you can’t do anything with any of your own stuff.”

As a record label and a record shop, Rough Trade gave life to the band in the 1970s and catalysed a renewed fervour for their records in the 1990s, in part through Kurt Cobain’s visit. “We’d been thinking about re-releasing the albums on CD because CDs, at that point, were what people were buying,” Ana says. “Shirley [O’Loughlin] talked to Geoff about the CD re-releases, and he wanted to do it. So they licensed those Rough Trade records to Geffen.” Both The Raincoats and Odyshape were reissued by Geffen Records in 1993.

But back to 1981 for now. Shortly before Odyshape was released, Ana put out a miniature 10.5cm x 7cm booklet with an emerald green paper cover. It’s made up of eight pieces of paper, stapled in the middle and folded to make sixteen pages total. On the front, Ana’s handwriting identifies the cost of the booklet: 20p. Inside, photocopied pages of handwritten lyrics, drawings by Ana and Gina, and typed details about the band abound. It was available at the Rough Trade shop Kurt Cobain stopped into a decade later. I’d assumed the booklet was designed to accompany the release of Odyshape, but Ana made it for a much simpler reason. “After the first album, we were interviewed by quite a lot of fanzines, magazines, et cetera, and I got a bit fed up with the same questions, so I thought I’d write them all up. So between the first and second albums, I made the entire book. I wrote everything in it. Then I took it to Better Badges — they used to do the badges for all the punk bands, including all the Rough Trade bands, and they also printed fanzines. I went there for the printing, then I stapled them all at home. There are only some lyrics from Odyshape in there since we hadn’t written all the songs yet!”

It would be incredible to see a 40th-anniversary reissue of Odyshape, I tell Ana, and maybe even a live performance to accompany it. Ana says she doesn’t know if it’s possible since it’s “quite a difficult album to play live,” reminding me of the various instruments involved in its creation. “But who knows,” she says. “Time always feels like it’s going faster than you thought it would. And the older you are, the quicker it seems like the decades are just flying by, so it’s difficult to say. But the spirit of what we were then is always still here – an enthusiasm for trying new things.”

Learn more about The Raincoats and Ana da Silva.

Words by Audrey J. Golden. You can follow Audrey on Twitter and Instagram, and you can check out her personal website to learn more about her writing and her archive of books, records, and ephemera.

The post 40 Years of The Raincoats’ Odyshape – Interview with Ana da Silva appeared first on Louder Than War.